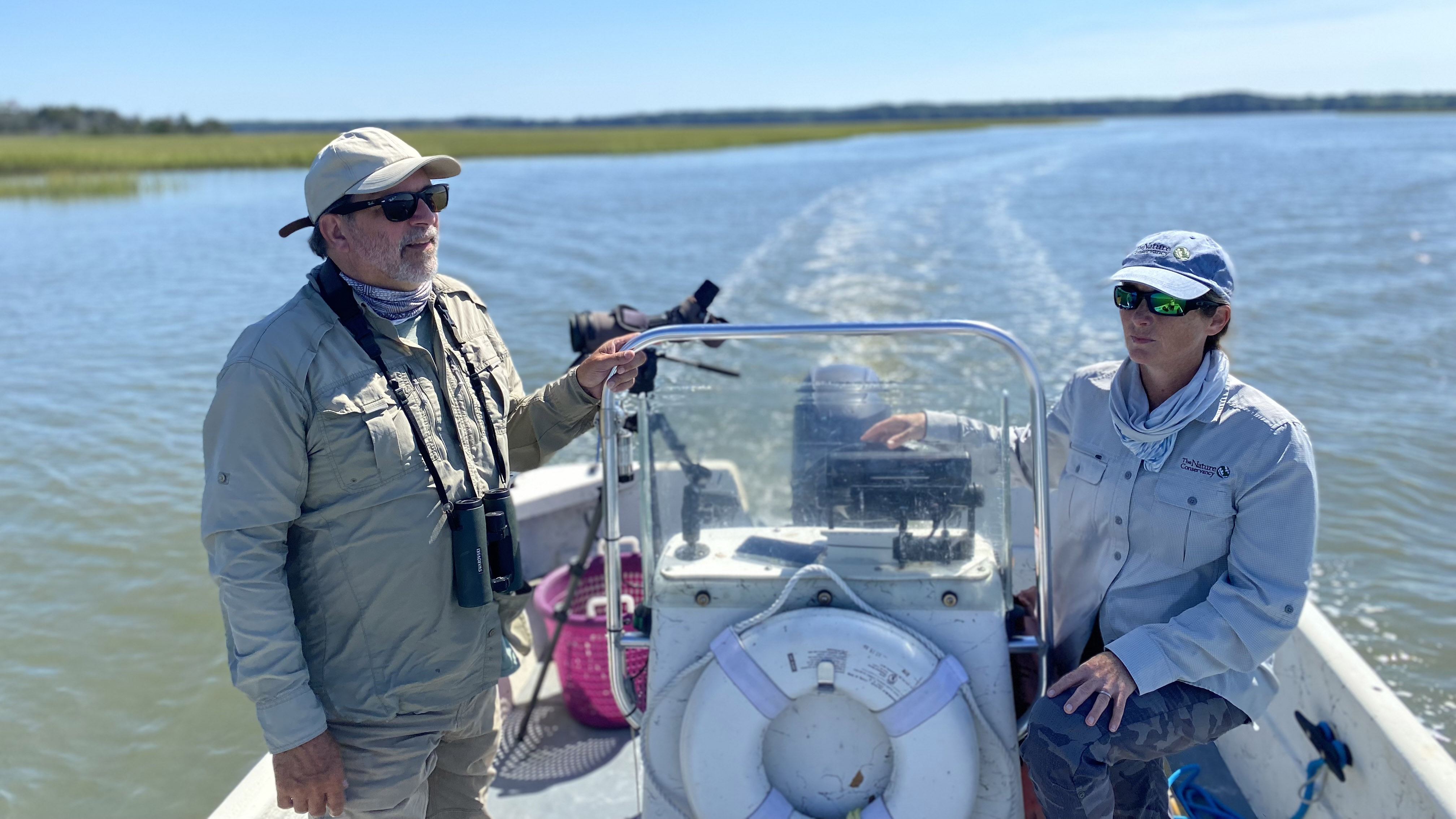 Bryan Watts, of William & Mary, and Alex Wilke, of the Nature Conservancy, off Willis Wharf on the Eastern Shore on Thursday, Sept. 1, 2022.

Each summer, a group of long-beaked, brownish shorebirds called whimbrels fill up on crabs on Virginia’s Eastern Shore before flying south to Brazil.

Experts know where that journey starts and where the birds end up. Less is known about their exact flight path over the Atlantic Ocean.

And within a few years, there could be an obstruction there.

Dominion Energy plans to build a wind farm 27 miles off the coast of Virginia Beach. It would consist of 176 wind turbines each standing at more than 800 feet – taller than the Washington Monument.

The location was already chosen to be out of the way of most bird migrations, but some species could still be impacted, the company and researchers say.

“There is some concern about the potential conflict with the turbine field,” said Bryan Watts, director of the Center for Conservation Biology at William & Mary. “It’s an open question … There may be some conflict, but there may be no conflict at all.”

Watts’ team is hoping to solve that question, in partnership with the nonprofit Nature Conservancy. Dominion provided about $300,000 for the two-year study.

On a recent morning, the waters were calm and the sun gentle as Watts pushed off a boat from Willis Wharf on the Eastern Shore. He was joined by Alex Wilke, a coastal scientist with the Conservancy’s Volgenau Virginia Coast Reserve who manages the migratory bird program.

They pulled out binoculars at low tide to search the surrounding mudflats for whimbrels.

It was likely the last week the species could be spotted on the Shore. Their numbers tend to peak in late July before they start flying south.

While here, the birds feast on fiddler crabs, some increasing their body weight by about 50% to make it to South America, Watts said.

The research team spent several weeks in August trapping and tagging whimbrels to track their Atlantic flight path. They ultimately sent out 15 birds with tags.

To trap the birds, Wilke said they use mats called noose carpets. When the bird steps on the trap, it loops around its leg to stop it from flying away. Team members constantly observe the area so the birds aren’t trapped long.

Then they get measured, weighed, fitted with a transmitter and released.

Once a day, the transmitter tries to send data via the closest cell tower, Watts said. If it can’t – like when the birds are flying far out in the ocean – it stores the data until it can.

Researchers can then track the birds through an online dashboard.

It’s not the first time they’ve tried to track whimbrels.

About a decade ago, Eastern Shore researchers attached some transmitters to the birds, hoping to learn about why they’d been declining in numbers by about 4% annually since the ’90s.

The effort taught them more about the whimbrels’ annual cycle, which includes returning to Virginia on their way back from South America and ultimately to the Arctic to breed.

“Projects like this where we’re sort of working locally but thinking hemispherically, that’s the only way we’re going to learn those important lessons and really be able to effectively protect these species in the future,” Wilke said.

This time around, they’re particularly interested in the altitude at which the whimbrels fly.

That’s data the previous technology didn’t capture and will help determine whether the turbines are a problem.

The Virginia Beach farm will be among the first offshore wind projects in the U.S., but there are plenty elsewhere around the globe.

Watts said he’s tried to assess what others have learned about birds and offshore wind.

It’s a mixed bag. Some species run into turbines, like has often been a problem on land. Others are “avoiders,” he said, and fly around the equipment.

“Birds respond in a number of different ways,” Watts said. “All birds aren’t the same in terms of what the benefits and impacts might be.”

The problems on land often stem from the wind farms being placed in wildlife corridors, he added.

The advantage of a project so far offshore is it’s beyond many migration paths – with the exception of a few, like whimbrels.

“That’s what this project’s about.”

Two pilot turbines went up in Dominion’s federal lease area out in the Atlantic in fall 2020.

Since then, the company has been doing its own wildlife research in addition to funding others, much of it part of regulatory requirements, said Scott Lawton, environmental technical adviser for Dominion.

They’ve learned a lot, he said.

Some things were more expected – like a phenomenon where the concrete structures have attracted marine life seeking habitat.

But cameras also captured bats and species Dominion didn’t expect so far from land – butterflies, dragonflies and other insects.

The whimbrels study is an extension of the research.

“One of the biggest questions that no one really knows is how high and what altitude are these birds migrating?” he said.

“We don’t want to be in a situation where we have high bird mortality.”

So if there is an issue with the turbines, what happens next?

It depends, but Overton said he doesn’t think the issue would move or shut down the project.

Rather, officials could need to turn to seasonal operational conditions when the birds are passing through.

The company and researchers also know the knowledge gained through this project will be valuable beyond Virginia.

Offshore wind farms are expected to become a more common sight along the East Coast in the coming decades.

But Watts said the Eastern Shore is a special place for whimbrels. It’s the only major place they stop on their way both north and south.

“It seems like, at least for the populations that use the Western Atlantic flyway, that these birds have built their annual cycle around the Eastern Shore. So this place is really special important.”