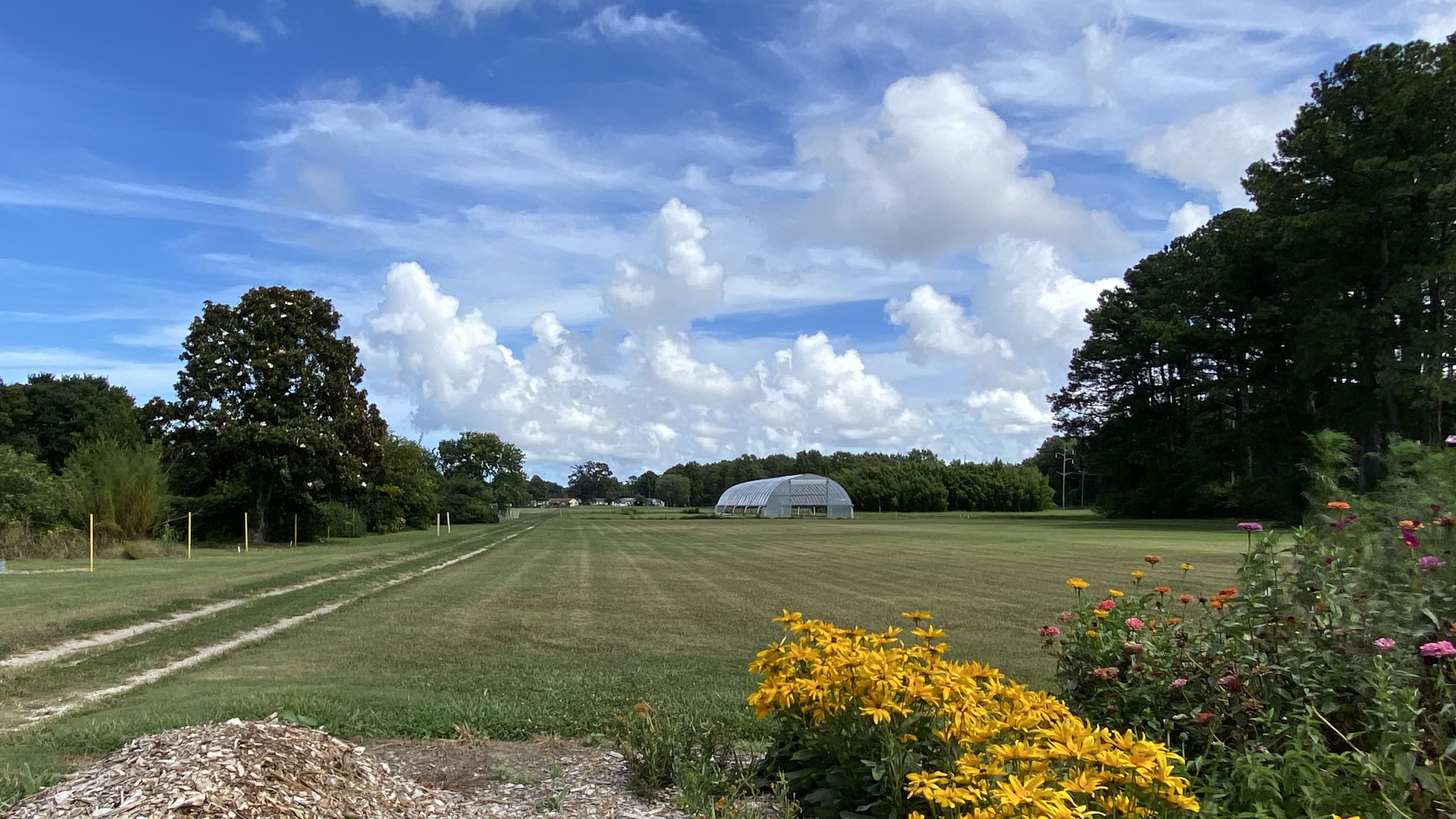 Testing fields at the Hampton Roads Agricultural Research and Extension Center in Virginia Beach in August 2022, with a pollinator garden in the foreground.

Century-old agricultural research center in Virginia Beach could be moving

For over a century, the Hampton Roads Agricultural Research and Extension Center has served those interested in growing.

Farmers from across and sometimes beyond the region travel to the 70-acre property on what’s now Diamond Springs Road in Virginia Beach to drop off seeds and plants for free testing.

But the center may have to relocate. And some worry about what that would mean for the community.

The state gave Virginia Tech half a million dollars this year to study what it would take to decamp from their current location and set up elsewhere in the city.

Developers have long eyed the spot, one of the few remaining large parcels in the urban corridor with development potential.

It’s along the border with Norfolk and near major transportation hubs such as the Norfolk International Airport, Interstate 64 and Chesapeake Bay Bridge-Tunnel.

According to the most recent city property assessment, the part of the land owned by Virginia Beach – 58 acres of the total 70 – is worth about $5.1 million.

“This is very valuable property,” said Jeff Derr, a weed sciences professor and director of the Hampton Roads center. “There’s always been developers and others interested that would love to develop the site.”

What did come as a surprise to the center was the state-mandated moving study.

Virginia Beach Del. Barry Knight introduced it as a budget amendment allocating $500,000 “to begin planning the relocation” of the extension center.

Virginia Tech has until mid-December to produce the study, for which it’s hired an outside consultant.

The Hampton Roads extension center started as a vegetable co-op in the early 20th century when vegetables were a more common crop on the Southside, Derr said.

It became part of the Virginia Tech network of 11 extension centers throughout the state in the 1980s.

In 1920, the co-op had ceded the land to the state to serve as a research station focused on improving local crop production. They then leased it for 99 years, which ended a few years ago.

Around then, city officials met with Virginia Tech and center leaders about moving to rural southern Virginia Beach. It was rumored a major company wanted the spot on Diamond Springs for a warehouse.

City spokespeople did not respond to WHRO’s multiple requests for comment for this story.

That settled the issue until this year’s budget amendment, which Knight said followed economic development discussions over the years with city staff.

Derr said center staff and faculty have enjoyed the location because of the easy access but also the land itself.

“This is prime farmland,” he said. “Our soils here drain well. … It’s a good soil type for growing crops for doing the types of research that we do here.”

That allows researchers to set up experiments on which turfgrass variety fares best under certain conditions, for example, or how nurseries can control weeds.

There are also a host of old buildings and greenhouses on the site.

The Virginia Turfgrass Council, an industry association, does a lot of work with the extension center, said executive director Tom Tracy. He said he and others around the region want it to stay put.

That includes a nursery owner on the Eastern Shore who told Tracy they value being able to drive just over the bridge-tunnel, drop off a diseased plant and have answers about it within days to save their field.

“What would happen if somebody says, you know, ‘the Norfolk Botanical Gardens — we can develop that land, it’s much more valuable,’” Tracy said.

“I think to the industry and to the Master Gardeners, it’s at that level. And I think that people don’t understand what a gem, what a treasure we have.”

Tracy added he thinks the current location is also important for researching greenery and water management in the urban setting. It’s surrounded by businesses and homes.

Del. Knight said he has not directly heard any concerns over a potential move, and that the feasibility study is simply to research the option. He thinks it could be smart to move the agricultural center to an agriculture-heavy part of the city like Pungo.

“Nothing’s been decided,” he said. “I don’t understand why anyone would object to looking at a study to see if you could locate it on land that’s worth a lot, lot less.”