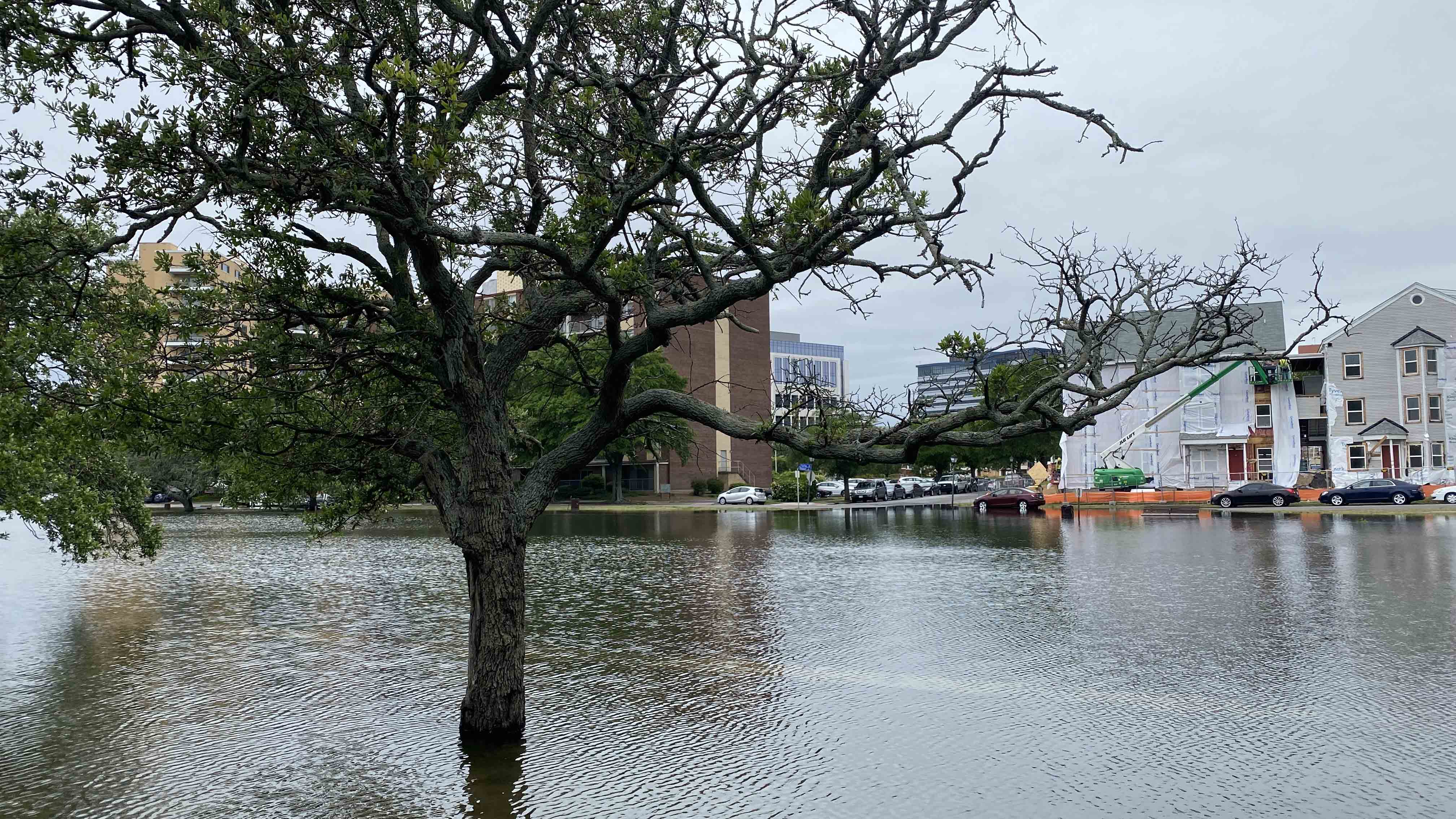 Photo by Katherine Hafner. Tidal flooding at The Hague in Norfolk in May 2022.

High tides could flood Hampton Roads almost a third of the year by 2050, NOAA warns

Last year, Norfolk saw about 13 days of high tide flooding, according to the National Oceanic and Atmospheric Administration. Officials predict that’ll stay about the same this year.

But within a few decades, the area could start getting high tide flooding more along the lines of 85 to 125 days per year.

That’s what NOAA says in its State of High Tide Flooding and Annual Outlook released Tuesday. The agency has released the report each year since 2014.

The annual outlook analyzes data from 97 tidal gauges in the coastal U.S. Locally, they include Sewells Point in Norfolk, Kiptopeke Beach and Wachapreague on the Eastern Shore and several spots along the Outer Banks.

The latest predictions are boosted by updated sea level rise scenarios, which hadn’t been recalculated since 2017. For example, the middle-of-the-road scenario says by the end of the century, sea levels on Norfolk would be about 4 feet higher than the levels observed in 2000.

The report finds that there was record-breaking high tide flooding in several coastal communities between spring of 2021 and 2022, including in South Carolina and Delaware.

Record-breaking “is to be expected to continue into next year, and into the foreseeable future,” William Sweet, oceanographer with the National Ocean Service, said on a call with reporters.

High tide flooding is now twice as frequent as it was just two decades ago, the agency says.

High tide flooding is a simple and increasingly common phenomenon where tidal waters rise above their normal levels because of wind or current shifts. They then spill into the surrounding community, causing so-called “sunny day” or “nuisance” flooding even without precipitation or storm surge.

The flooding particularly impacts low-lying areas such as Hampton Roads, where the land itself is slowly sinking. It’s further compounded by rising sea levels and the loss of natural barriers like wetlands.

NOAA defines minor high tide flooding as about 1.8 feet above average high tide, causing stormwater backups and road closures. Major, on the other hand, would be nearly 4 feet above average and could lead to evacuations or serious property and infrastructure damage.

As sea levels rise, federal officials say, conditions that cause minor or moderate flooding now could turn major within a few decades.

But officials are starting to realize they also need to track damage from more frequent tidal flooding.

“They’re not necessarily as impactful, but the higher frequency is starting to take its toll,” Marcy said. “These are kind of unseen, unquantified amounts.”

About 80% of gauges along the Eastern and Gulf coasts showed acceleration of flooding in the past year, Sweet said.

He said the government puts out the report to help guide local officials — “so folks can plan and prepare for what very well is coming to them.”

You can explore the latest dataset at on NOAA's website.