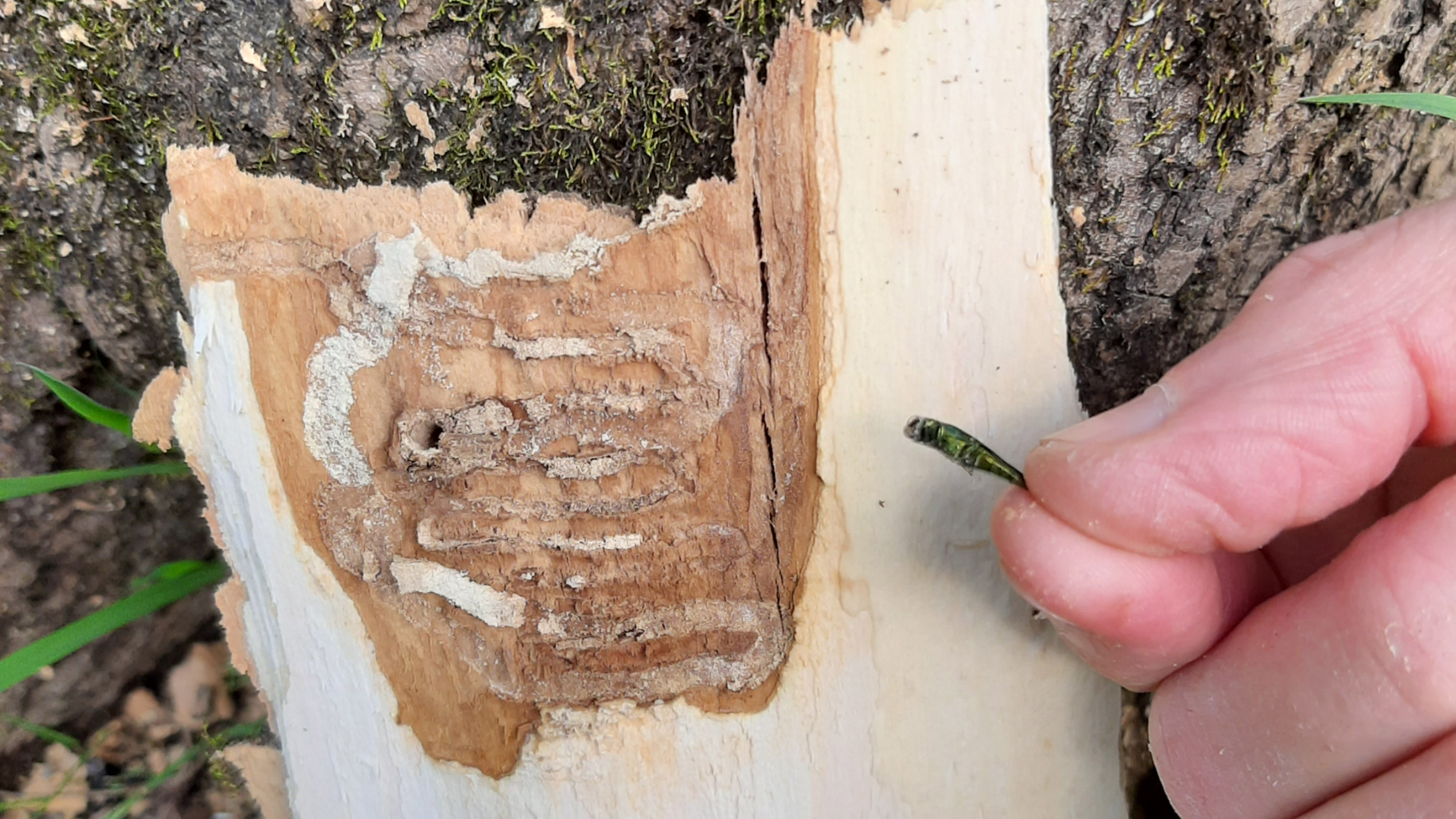 The emerald ash borer is tiny, shiny and destructive.

As its name suggests, the beetle is bright green and bores its way into ash trees to feed on their bark.

The invasive species from Asia first appeared in the United States two decades ago in Michigan. Since then, it’s been spreading and decimating the country’s ash population.

“There were some pretty strong efforts to try and stop that initial invasion, but all failed, unfortunately,” said Lisa Deaton, an area forester on the Middle Peninsula with the Virginia Department of Forestry. “The borer has been marching its way towards the Atlantic Ocean since then.”

It made it to the Commonwealth back in 2008. But Deaton just saw her first live borer up-close.

That’s because the department recently spotted one in a tree in Gloucester County, confirming its presence there. It’s one of the last localities in the state to declare an infestation, but one of the first in Hampton Roads.

Deaton said local officials have seen signs of the insect for a while. Because borers eat from the outside of a tree inward, dead branches start to appear first on the outermost and top parts of ash trees.

The beetles also chew a D-shaped hole in the side of the tree, whereas other species usually leave behind circles, Deaton said.

Infested ash trees are likely to die within five years.

The spread of the invasive borer is having a “huge impact” everywhere it touches, Deaton said. Companies are even storing away ash lumber for future baseball bats, which are historically made of the wood.

Tree farmers often want to cut down healthy trees before they get infested, to protect their investment, she said.

The average homeowner can instead treat healthy trees to prevent infestation. Arborists do that by injecting insecticide into a tree to protect it.

Those that are already thoroughly infested, however, are often too far gone to save.

“It’s very heartbreaking when you think you’ve got these trees forever in your yard and then an issue like this comes along,” Deaton said.

“The big hope is to look at what other trees you have in your yard that will be great yard trees one day and start cultivating the younger ones. And maybe say goodbye to the ash trees.”

According to the state forestry department’s online tracking map, most Hampton Roads cities have not yet reported the emerald ash borer. Newport News was added to the map in 2020.

Earlier this spring, the forestry department launched a program offering to pay residents in eastern Virginia to treat their ash trees to prevent the pest.

Officials at the time said the focus on the region was because there hadn’t been as many infestations yet.

But they acknowledged it was a matter of time.

You can learn more and report infested trees on the forestry department’s website. You can also find an arborist near you at https://www.treesaregood.org/findanarborist/findanarborist.