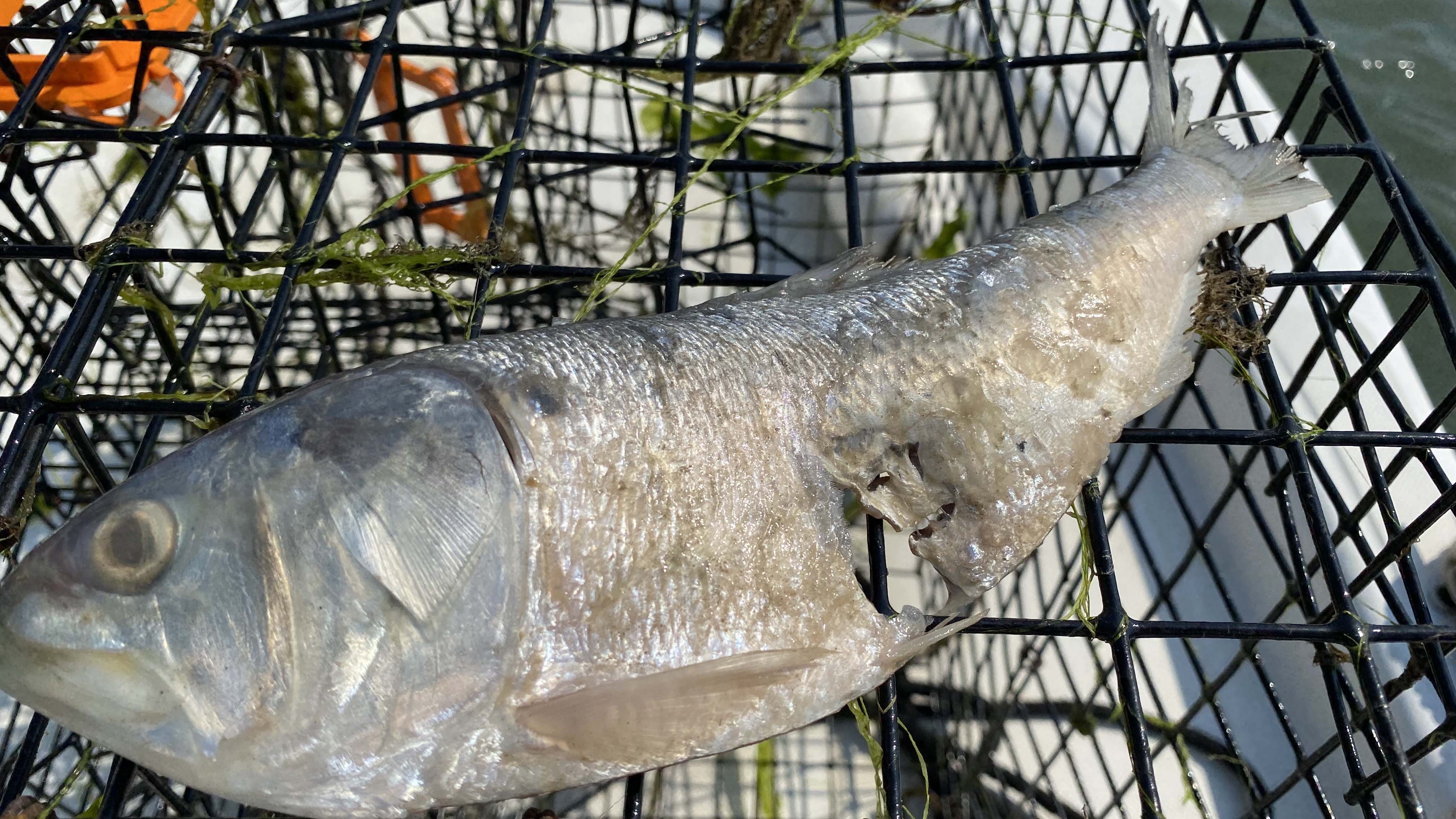 Photo by Katherine Hafner. A menhaden caught in a Chesapeake Bay Foundation cage in the Lynnhaven River in May 2022.

Bob Mandigo remembers the days when striped bass were plentiful in the Chesapeake Bay.

He’s been fishing recreationally in Hampton Roads since 1964 on boats, beaches and piers, and has traveled up and down the Virginia and North Carolina coasts to do so.

But Mandigo, a member of the Tidewater Angler’s Club, said striper catches in the bay have become less frequent over the last decade.

Fishermen throughout the state believe they know the culprit: menhaden reduction fishing.

That’s the industry that catches small, nutrient-dense fish called menhaden to process them into oil or fishmeal.

The commonwealth is the last place on the East Coast that allows it, at the Reedville facility of Canadian-owned Omega Protein.

Anglers say Omega’s bayside business has impacted the food chain by taking away menhaden from species that rely on it, particularly striped bass.

A new campaign of almost two dozen groups, including the Tidewater club, is pushing Virginia to ban the industrial menhaden harvest in the Chesapeake Bay. They sent a letter to Gov. Glenn Youngkin last month and are currently circulating a petition.

“We’re saying it’s not sustainable to keep doing what the state has been doing as far as the menhaden are concerned,” Mandigo said. “We’re hurting our economy.”

On the other hand, Omega blames anglers for overfishing bass and says a bay menhaden ban would likely put it out of business.

Regulation of the fish has a complicated – and politically fraught – history in Virginia.

For many years, lawmakers in Richmond controlled regulations directly, the only fishery not under the jurisdiction of the Virginia Marine Resources Commission.

After longtime efforts, that changed in 2020 and the VMRC gained control.

Then there’s the Atlantic States Marine Fisheries Commission, which oversees 15 states along the East Coast.

The commission first set a cap for Omega’s harvest in the Chesapeake Bay in 2006. After the company was found out of compliance in recent years, the quota dropped.

The limit for what the company can draw from the bay is currently set at 51,000 metric tons — about 112 million pounds.

The Atlantic commission also started incorporating “ecological reference points” into their menhaden decisions, accounting for the fish’s role in the ecosystem.

Striped bass rely on Atlantic menhaden for about a third of their diet, according to one study. Other animals like osprey also feed on it.

Baby menhaden tend to stay in the bay for about a year before leaving the estuary to join adult schools, according to the National Oceanic and Atmospheric Administration.

Officials’ most recent assessment in early 2020 determined Atlantic menhaden are not overfished, but those advocating for a ban say that looked at the overall coastal population, not the bay specifically.

Since the early 1990s, the reduction fishery has decreased its overall fleet size but become more concentrated inside the Chesapeake Bay, potentially depleting the menhaden population, according to the Virginia Institute of Marine Science.

The VSSA is one of the leaders of the new campaign, which is also partnered with national groups including the Theodore Roosevelt Conservation Partnership and National Marine Manufacturers Association.

Atkinson acknowledged that there is not much research directly linking local fish declines with menhaden reduction fishing.

But he says the groups want the state to put a halt on the industry until science demonstrates that it could continue without affecting the bay ecosystem.

Omega argues the effort is predicated on faulty reasoning.

“Without a doubt, the reason that striped bass numbers are low is because of overharvesting (of them) and not this dreamed up concept of a lack of available menhaden,” said Ben Landry, Omega’s spokesperson.

The local menhaden fishery’s been in the Chesapeake for more than a century, he said. Rather than ramping up, the total volume of menhaden taken from the waterway has decreased, he said.

If Virginia officials move forward with a bay ban, Omega would still be able to catch menhaden out in the ocean, where it already gets about two-thirds of its harvest.

But Landry said weather and safety issues often make it difficult to get from Reedville to the Atlantic.

“This would be basically the death knell for that facility,” he said. "It appears that the recreational guys want the bay to be memoralized as their playground, whereas we view it as our workplace. ... We can coexist."

It’s unclear how the governor would institute such a menhaden ban now that the fishery’s regulated by the VMRC.

A spokesperson for the commission did not respond to a request for comment.

Youngkin spokesperson Christian Martinez said in an email that the administration and the VMRC “are in regular communication and have met multiple times” with the sportfishing association and other stakeholders.

Atkinson said he had not heard from the governor’s office since the letter was sent. The group is working to gather signatures on its petition.

“We recognize this is a politically charged issue and has been for a long, long time. We’re trying to do it in an honest fashion,” he said. “We’re sensitive to the Reedville situation, and the jobs. … We just feel like it’s time for them to move their fishing out into the ocean.”