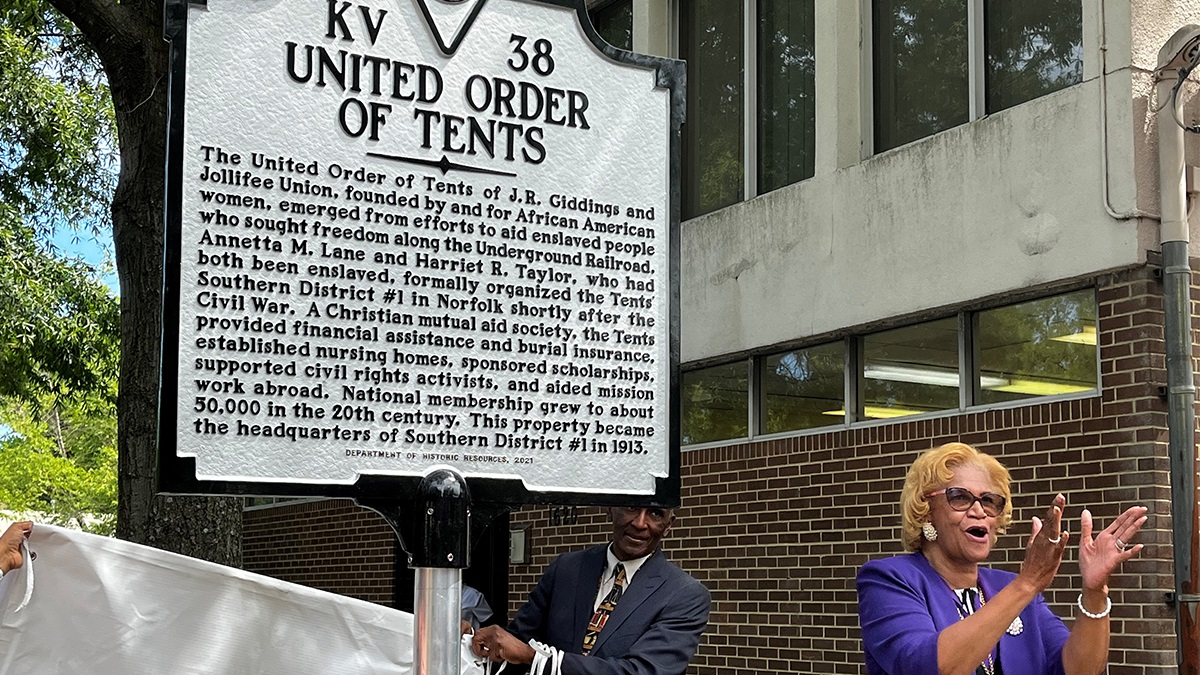 Lodies Gloston, president of the United Order of Tents, unveils the group’s new historical marker in Norfolk on June 29. (Photo by Ryan Murphy)

“I’m supposed to be at the doctor’s office, but I came here instead,” she said, grinning slyly and gazing over at the black and white sign that had just been unveiled. “This is one of the greatest things that’s happened to us.”

Spruill is a member of the United Order of Tents, a secret society of Black women that traces its roots to the Underground Railroad.

The group has tended to the sick, elderly and destitute in ways big and small for the last 155 years. It’s operated rest homes and built apartment buildings up and down the East Coast.

On Wednesday, a state historical marker recognizing the Order of Tents was unveiled at the site of the original chapter’s headquarters on Norfolk’s Church Street.

City and state representatives lauded the work the women’s group has done and continues to do, emphasizing the hurdles overcome by the group's founders to take care of their own.

Before emancipation, Annetta M. Lane was enslaved on a Norfolk plantation.

As a nurse, she used her freedom of movement to help fugitive slaves traveling the Underground Railroad.

Following the Civil War, Lane and another formerly enslaved woman, Harriet R. Taylor, saw a dire need for help for those who were poor or ill in the Black community.

Lane and Taylor founded the Order of Tents in 1867. Its name is a reference to the tents used by escaped slaves fleeing North.

The Christian women’s group tended to the sick and the elderly, establishing rest homes and building apartments. It sponsored scholarships and supported civil rights activists. It paid for burials.

And in the post-war South, secrecy provided security.

Closed meetings and rituals only Tent sisters knew about helped ensure that members could keep their activities from prying eyes in a heavily-segregated society still hostile to Black autonomy.

The original incorporation of the group had to be done under the auspices of a pair of white abolitionists, J.R. Giddings and Jollifee Union.

Chapters sprang up along the East Coast through the late 19th and early 20th centuries. At its peak, the United Order of Tents had 50,000 members.

Members like Spruill - the woman skipping her doctor’s appointment - continue the tradition of aid.

She hopes that having the Order of Tents’ history on display will bring new blood to the organization.

"It's a great thing so people can come by and see this is what we do,” Spruill said. “I’ve been in here for like 50 years. … Older people like me, we're not going to be here that much longer. So we want the young people to come in.”