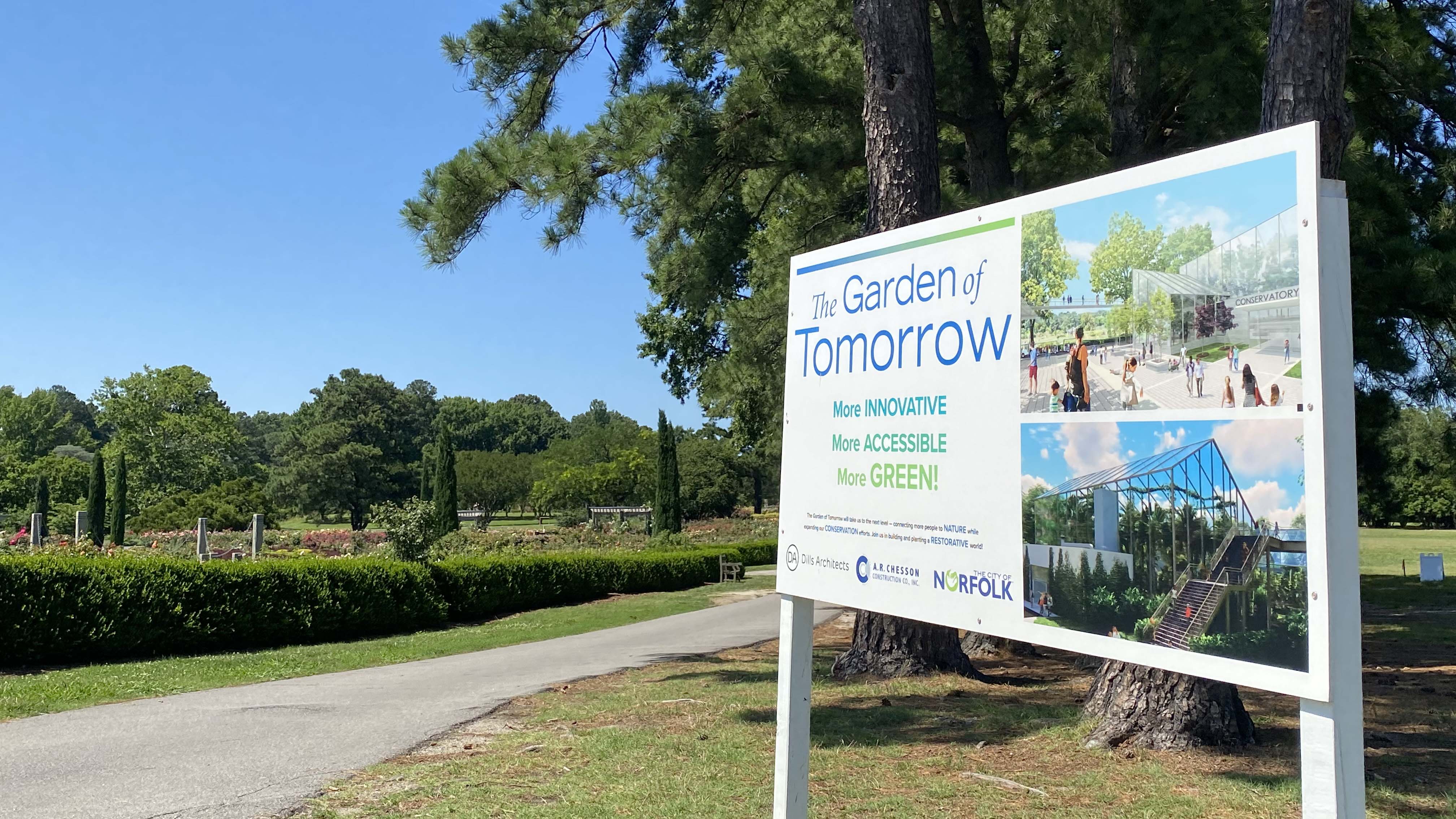 Photo by Katherine Hafner. A sign about the "Garden of Tomorrow" project at the Norfolk Botanical Garden on Wednesday, June 15, 2022.

The Norfolk Botanical Garden draws thousands of visitors per day to its 60-plus gardens, which put wildlife front and center.

But the infrastructure that surrounds and allows entry into the gardens – the parking lot, a tollbooth, the visitor center – is aging, said Michael Desplaines, president and CEO of the nonprofit.

“Parking is always an issue for us,” he said. The facility’s lot only holds about 400 cars.

Staff have also long been requesting a covered space to allow better nature education even when it rains, Desplaines said.

Those needs and and more have led the nonprofit to launch a major, $30 million expansion they’re calling the “Garden of Tomorrow.” They’ve raised $25 million for it so far.

The project will include several new buildings and a revamped parking area.

But Desplaines said a major goal is not just what’s being built but how. Officials are focusing on eco-conscious design features and as much green space as possible.

“We’re going to show people what you can do to make a difference,” he said. “It was about building in a way that was in tune with nature and getting people to connect with nature through the world of plants so that together we can address the environmental crisis.”

The first element is an “innovative ecological parking garden,” he said. “The idea is the minute you get out of your car, you should be in a garden.”

That means essentially trees planted throughout the spots — by a ratio of about one tree per seven car spaces.

Once out of the car, visitors will walk to a new pavilion to buy tickets, crossing over a pond meant to help retain water. The new ticketing system also aims to prevent bottlenecking that happens at the current tollbooth.

The new pavilion will be complete with a roof garden, on which employees will grow herbs and some other food for a bistro below.

Other new buildings include a conservatory with tropical and desert biomes, a skywalk above the rose garden, a kayak launch and a new covered open-air education center along the water.

Throughout the new structures, the nonprofit plans to capture and reuse water.

Glass in the conservatory will use a reflective pattern to prevent bird strikes. Wood used in the buildings will be treated using a Japanese technique called Yakisugi, wherein the wood is charred so that it can be preserved without chemicals.

The Botanical Garden is hoping to start construction by the fall, with the grand opening in 2024. The gardens will remain open in the meantime.