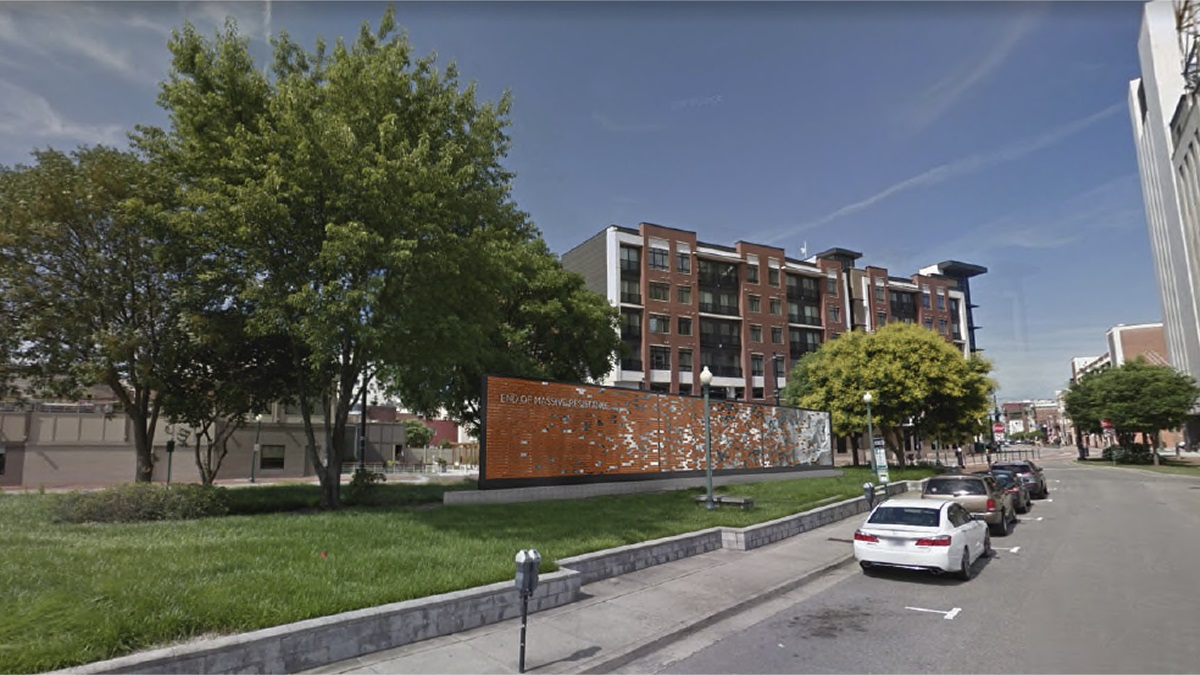 This rendering shows the planned commemoration of the end of Massive Resistance at its location in Norfolk’s Flatiron Park. (Courtesy of the City of Norfolk)

Norfolk set to build monument to the end of Massive Resistance

After decades of discussion, Norfolk is finally nearing completion on a monument commemorating the end of Massive Resistance.

That was the effort led by segregationist Sen. Harry Byrd to prevent the racial integration of Virginia schools following the U.S. Supreme Court’s 1954 decision in Brown v. Board of Education.

That decision rejected decades of “separate but equal” justification for segregated schools and laid the legal groundwork to force integration.

For years, segregationists did everything they could to stop Black students from setting foot in white schools and Norfolk became an epicenter in the fight against integration.

That included closing some of the schools for a period of time to prevent Black and white students from learning alongside one another.

The new commemoration is a wall that transitions from solid brick to glass. It’s located downtown in Flatiron Park on Granby Street.

Karen Rudd, who oversees public art for the City of Norfolk, said it’s meant to symbolize “breaking down the walls and the integration of schools.”

Along the wall, there is a 44-part timeline detailing the history of public education, the integration of the schools and the Norfolk 17, the first Black students to learn in white schools.

“I think it’s the right mix of telling the story and making people feel compassionate about where we’ve been,” Rudd told the City Council this week.

The memorial wall is expected to be installed and dedicated before the end of the year.

Retiring Councilman Paul Riddick, who has served on the council for the last 30 years and who was a civil rights leader before that, said the city’s been going back and forth on the monument since before he was on council.

Several times over the last few years, the idea had come up at council meetings but was always met with some problem or another – things like the location or design – so progress on the development of the monument has proceeded at a glacial pace.

After the Brown v. Board decision, the Norfolk School Board conducted exhaustive interviews with Black students seeking admission to white schools. Of the more than 150 who applied, just 17 were deemed fit to attend. These students would become known as the Norfolk 17.

But even that was too much for the powers that be at the time.

Officials delayed the reopening of schools in the fall of 1958, as the Norfolk 17 were set to start their first school year in white schools.

When schools across the city finally opened near the end of September, students at the six middle and high schools the Norfolk 17 were set to attend arrived to find the doors padlocked shut.

Norfolk, along with Charlottesville and Warren County, took the unprecedented step of closing schools rather than allowing Black students to learn alongside white ones.

This led to not only the Norfolk 17 being denied their education, but also the nearly 10,000 white students who were also enrolled in those schools. They became known as the “lost class of 1959.”

A lawsuit from the parent of a white Norfolk student made its way to the state Supreme Court, which held that the closures were illegal. Those six schools were finally reopened in February of 1959.

The Norfolk 17 arrived to integrate Norfolk’s schools. But with that milestone came horrific treatment at the hands of white schoolmates and teachers, as well as continuing efforts to maintain the segregated social order.

And as the schools were preparing to reopen, segregationist lawmakers were passing laws to limit integration as much as they could, such as state grants encouraging attendance at private all-white “segregation academies.”

Norfolk was placed under a federal order to bus students in order to better integrate schools in the 1970s. But in 1986, Norfolk had been deemed sufficiently integrated and was released from the federal order, ending busing in the city.

The end of busing predictably resulted in the resegregation of schools along neighborhood lines, which had remained segregated. Those divisions still hold remarkably firm to this day.