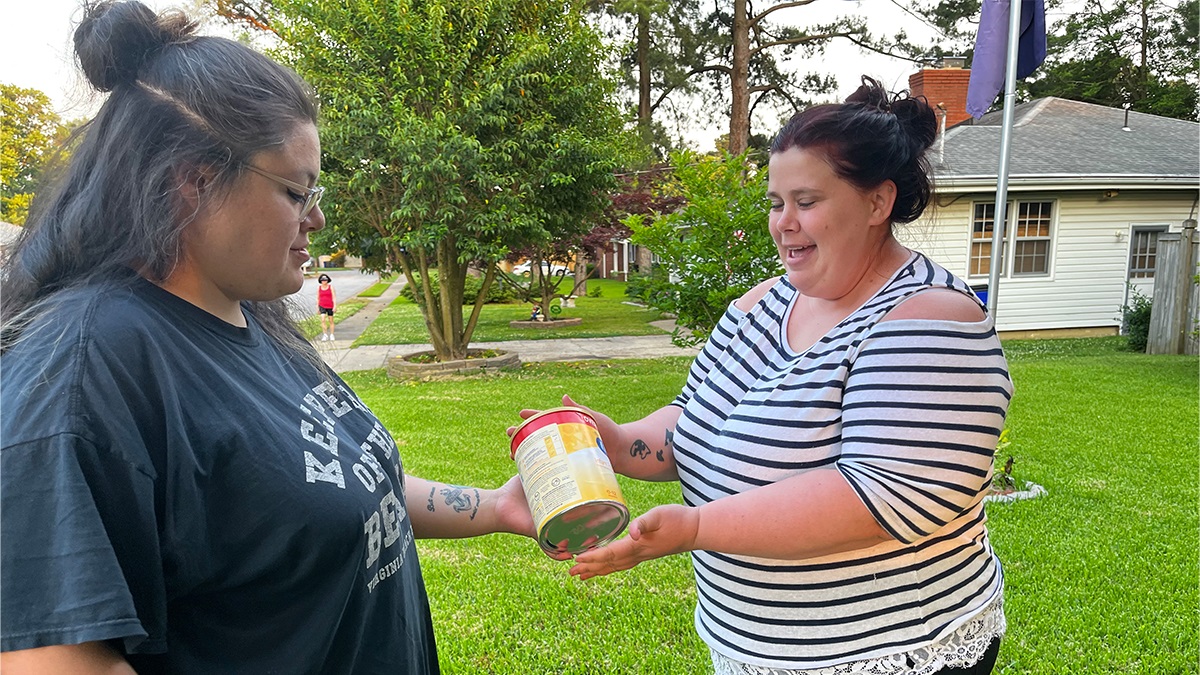 Gina Slayton (left) delivers baby formula to a mother in Virginia Beach who’d been struggling to find it. (Photo by Ryan Murphy)

It’s almost 9 p.m. on a Wednesday early in June.

Gina Slayton grabs a loaded grocery bag from the back seat of her Toyota 4Runner and heads into a Virginia Beach tattoo shop.

She hands off the bag to a man who emerges from the back, who thanks her profusely.

Nationwide, families have faced shortages after a major formula manufacturer had to shut down production earlier this year. Many are now struggling to feed their babies.

In May, 43% of baby formula was out of stock across the nation. Now in June, nearly 75% of it is missing from store shelves.

Desperate, many have turned to Facebook, posting cries for help in groups and setting up swaps or buys from those who have what they need.

Slayton, a stay-at-home mom of two, started seeing the pleas in Facebook motherhood groups she was a part of.

“It was breaking my heart, reading these women who are so desperate to find formula that they're doing everything and anything that they can to get it,” Slayton said.

She saw new moms willing to pay way over retail price for every can they could get their hands on, even paying for free samples other parents had

Then, Slayton realized the stuff people were saying was impossible to find was sitting on the shelves of the Food Lion and the Walmart where she lives in Elizabeth City.

“It’s like ‘what are you talking about? There’s formula right here.’ And so that night I made a post saying that, you know, there's formula here. If anybody needs any, I will be more than happy to go grab it,” she said.-+

That initial post blew up and soon Slayton was getting tagged in other posts requesting help.

Over the last month, she’s become a kind of formula mule. A couple times a week, she wedges cans of formula between the carseats in the back of her 4Runner and heads north across the state line.

In some corners of the internet, they’ve taken to calling her 'the formula fairy.'

“People are desperate for formula and I'm just like a milk wagon right now,” Slayton said.

At this point, she estimates she’s delivered to 30 different households, some more than once.

She tries to schedule multiple drop-offs per run since the drive to and from North Carolina is about an hour each way. One of her runs took nine hours.

“It's definitely become a full time job. I do feel bad for my own family because I do feel like now I'm, like, neglecting them because I'm spending so much time.”

Slayton said her husband is supportive, caring for their 4-year-old and 17-month-old while she’s out carting around formula. She said he didn’t bat an eye when she started doing deliveries.

“I want to just break down and cry in the store"

Before Slayton arrived at the tattoo parlor that evening in early June, she’d delivered to five other parents. One was Ashley Churchill.

The out-of-work mother and her two young kids looked all over Virginia Beach in search of formula. The only place Churchill found the type she needed was at Walgreens. But the store wouldn’t take her WIC benefits, so she was out of luck.

“I want to just break down and cry in the store,” Churchill said. “I never thought in America, babies wouldn't have formula to eat. This is outrageous. It's crazy.”

She headed down to Elizabeth City after she’d struck out in Virginia Beach, but was once again turned away, this time because her state WIC benefits were only usable in Virginia.

“And then I got a message from her and she's like, I notice that you're looking for a formula. I can help you out. And I was like, Oh my goodness, thank you so much. … you're such a savior,” Churchill said.

They embraced.They cried. They commiserated. But it’s brief.

One's got a hungry baby to feed. The other’s got more deliveries and a long drive home.

“I was honestly really trying to find my purpose”

Slayton knows she can’t help every young parent in Hampton Roads. She’s had to leave some Facebook groups to stop herself from responding to every desperate post.

“I did have to limit myself from being in all of them because I would have just all day just kept reaching out and stuff because these women are desperate and if I can help, I want to help,” Slayton says.

“Before any of this and stuff, I wasn't doing anything. I was honestly really trying to find my purpose, I guess … find myself, I guess. And then this happened. And now here I am really filling this void that I had in myself with helping women.”

Another one of Slayton’s deliveries that June evening was to Zuleika Aldegon, who met Slayton in the parking lot of a Portsmouth Walmart.

Aldegon has spent more than a month on a daily hunt for baby formula for her 5-month-old daughter.

A standard can of formula is around 12 ounces. Five-month-0ld Melani requires special hypoallergenic formula or she’ll get sick.

Aldegon was buying from Amazon, but even the online mega-retailer ran out.

She said because she works a day job at Norfolk Naval Shipyard, she often misses out on people offering to sell or trade formula on Facebook.

“So then when I go on, I see people have always claimed it already. Because people are home, they get to it first. And you know me, I'm working all day and I'm like, Oh, I can't even leave.”

Aldegon got so desperate recently, she took a day off from work to pick up a single $40 can of formula from a woman in Virginia Beach.

Before she was able to get more, she’d been cutting the hypoallergenic formula to make it last, mixing in other formula, baby food and oatmeal.

Aldegon was the only one of the six families Slayton delivered to that evening who was able to pay her for the formula and the trouble of delivering it.

Slayton said she never asks for payment. At this point, she estimates she’s spent around $800 between formula and ever-more-expensive gas for the 4-Runner. But she also said she’ll never turn down money, because it means she’ll be able to keep doing runs.

“The only way that I would actually stop is if I really couldn't do it financially anymore,” Slayton said. “But to be honest, I probably still wouldn't really stop if I had a mom reach out to me. Maybe (I’d) help like one or two moms rather than like eight moms at once.”

As she wraps up more than three hours of deliveries around 9 o’clock that June evening and prepares to head home to Elizabeth City, Slayton checks her phone.

She’s already got a few messages from other parents asking when she can make her next formula run.

“Hopefully I don't have to do it much longer and we’ll get some sort of relief,” Slayton said. “But until that relief comes in, I'll keep driving.”