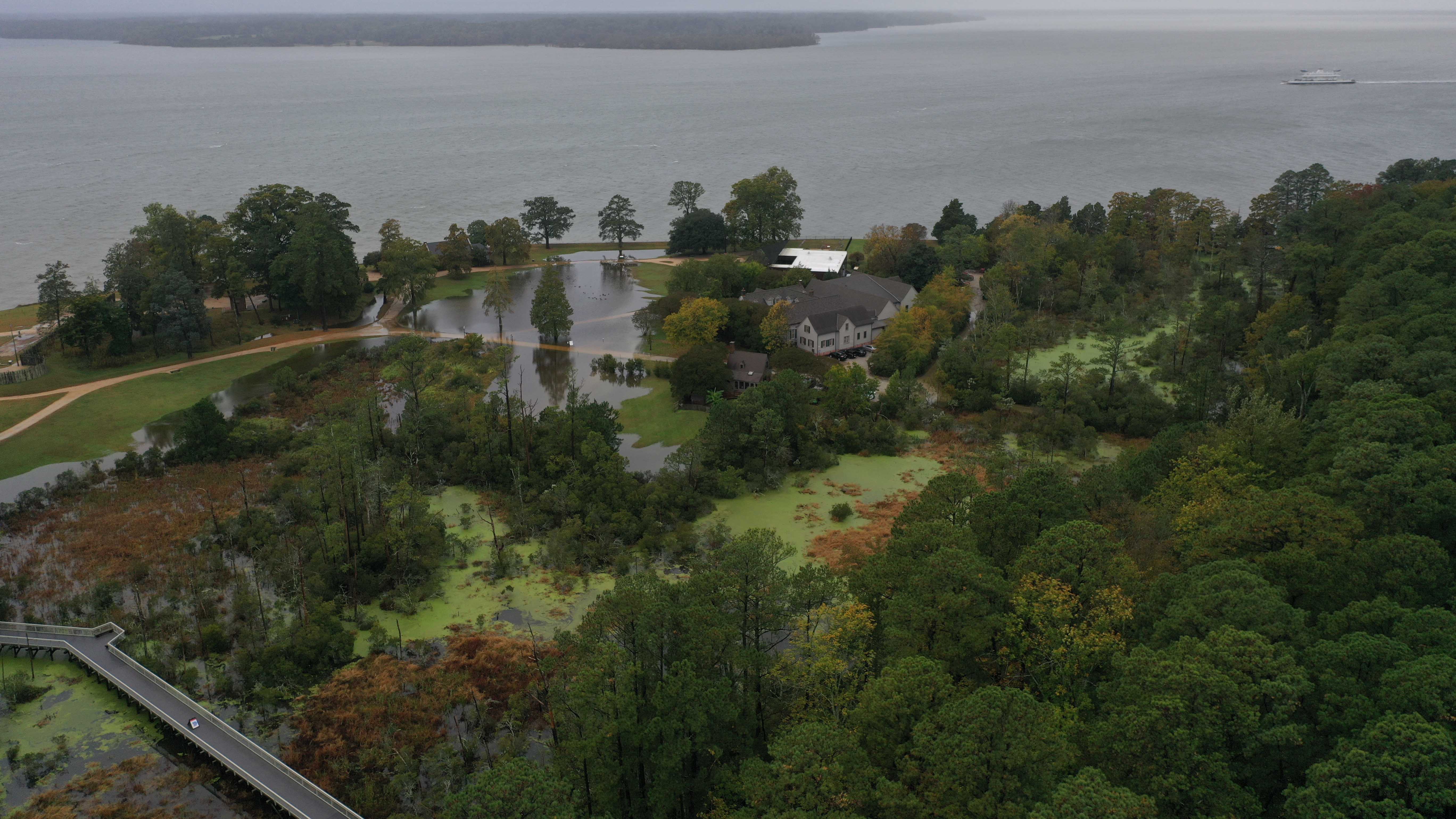 Photo by Anna Shackelford of the Jamestown Rediscovery Foundation. Flooding at Jamestown after a Nor’easter in October 2021.

Jamestown historic site is at risk of “going underwater.” Leaders are launching an effort to save it from climate change.

When English settlers arrived in Virginia, they chose the site of Jamestown because of its location along the banks of the James River.

Now, the same location is threatening to wash away the record of that long history.

“We are dealing with a severe threat from environmental change,” Jim Horn, president and chief officer of the nonprofit Jamestown Rediscovery Foundation, said in an interview with WHRO. “We are very close to the James River and therefore very susceptible to tidal surges and the growing force of high tides.”

Climate change threatens the survival of Jamestown in the coming decades, officials said at a news conference on Wednesday held in the Jamestown Memorial Church.

It was timed to coincide with the release of the National Trust for Historic Preservation’s new list of America’s 11 most endangered historic places, which includes Jamestown.

Local leaders are now launching a “Save Jamestown” campaign focused on protecting the 400-year-old site from the impacts of climate change.

The place provides the backdrop “against which early and fateful encounters among the English colonists, native peoples, and enslaved Africans took place,” officials noted in a statement.

For decades archaeologists have worked at the historic settlement to uncover information about the Commonwealth’s past. They’ve found human skeletons, artifacts from colonial life and more.

But from time to time, they have to put a hold on digging projects. Water from storms or tidal flooding inundates the property and forces everything on site to stop.

That’s happening more often, Horn said. Wetlands are encroaching on the property. Stronger storms lead to a host of challenges.

Flooding used to shut down settlement operations – including hosting visitors and excavations – a couple times a year. Now it’s more like five or six times and increasing, Horn said.

“Water is the enemy of archaeology,” he added.

But Jamestown Island is a good example of the intersection of those topics, he said.

“We must think not only of the water inundation on top of the ground but what’s going on under the ground,” Givens said.

The foundation and nonprofit Preservation Virginia, which owns the site, will need tens of millions of dollars to enact measures to protect the site.

Officials already plan to reinforce a seawall around the property that went up in the first years of the 20th century, Horn said.

Other actions could include elevating buildings, raising low-lying areas and roads by adding several feet of soil, adding floodgates and pumping stations and more.

Horn said officials have looked to Norfolk’s $112 million Ohio Creek Watershed Project as an example of what can be done. That project is working to build resilience against flooding in the Grandy Village and Chesterfield Heights neighborhoods.

The site could be underwater within five or six decades — but action is required within the next few years to prevent that, Horn said.

Speaking via Zoom at Wednesday's event, Virginia Sen. Tim Kaine emphasized the importance of preserving Jamestown as a historical and cultural resource.

“Today, we’re together sounding the alarm,” he said.