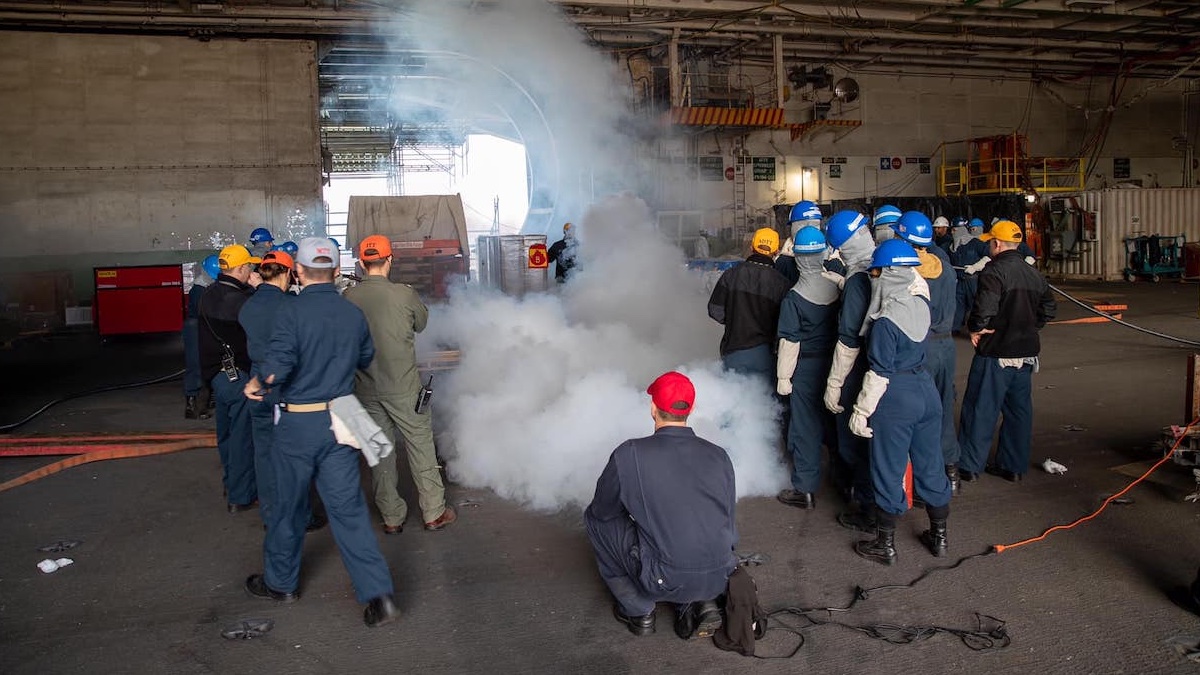 Photo from U.S.S. George Washington Facebook. Sailors complete a number of jobs during the refueling process.

The Navy has launched multiple investigations and moved more than 200 people off the USS George Washington after seven deaths among its crew in 12 months.

At least four of those deaths were by suicide.

One of those investigations is a broad examination of conditions sailors face while performing the complex process of completing the carrier’s overhaul.

The Nimitz-class carrier began its Refueling and Overhaul in 2017 and was scheduled to complete it last year, but has extended the process by more than a year.

Refueling is an operation the ship undergoes midway through its life as workers refuel its nuclear reactor and conduct major repairs.

Experts say maintenance of any kind on a ship is an extremely difficult and dangerous event.

"When they go into a shipyard period, the ship shuts down a lot of the very things that help protect it," Matt Phillips told WHRO in 2020, while explaining a series of shipyard accidents. Phillips is a retired U.S. Navy surface warfare officer.

Last week, Master Chief Petty Officer of the Navy Russell Smith, a senior enlisted sailor, said he believes there is a connection between shipyard work and higher rates of mental health issues and suicides.

Smith was discussing the issue with sailors from the Washington.

“[W]e're aware of it,” he said, “and maybe putting more psychiatric care closer to where sailors are struggling rather than where we think the work is harder. ’Cause I would argue the work is harder in the yards than it is on point cause you're trained for that and that's your job.”

Several Navy personnel have died by suicide during maintenance in recent years.

In 2019, three sailors from USS George H.W. Bush died by suicide during a multi-year overhaul at Norfolk Naval Shipyard in Portsmouth.

Personnel also died by suicide on two submarines docked in Hawaii's Pearl Harbor Naval Shipyard during maintenance – the USS Columbia in 2019 and the USS Charlotte in 2021.

A February report by the U.S. Government Accountability Office said extended maintenance on ships can cause serious mental health problems among workers, leading to labor shortages that cause more mental health issues and more delays.

The GAO interviewed more than a hundred personnel from 16 different Navy ships, including two Nimitz-class carriers like the Washington. The GAO did not identify which ships it sampled.

“Members of one ship’s crew stated that they lost one person to suicide and a dozen other personnel experienced mental health issues over a period of seven months,” the report stated.

U.S. Rep. Elaine Luria spoke to sailors on the Washington, who told her about the unique strain the overhaul puts on new personnel.

“One of the common things I heard from the junior sailors across the ship is this is their first duty station,” she said. “(This) is all they've known of the Navy.”

Luria said the Newport News shipyard can feel isolated for naval workers and COVID-19 precautions made that feeling worse.

“(There) really isn't the ability to sort of walk off the ship, walk off of the shipyard and be somewhere,” she said.

Smith, the officer who spoke to the Washington’s sailors, agreed.

“Newport News, you know, unfortunately we're a little bit of a victim… of the geography,” he said, according to the transcript of the conversation from the Navy.

“Who's gonna build coffee shops and internet cafes and restaurants and… who's gonna buy the land and then convince, you know, these franchises to come in and build that stuff?”

Plus, Smith said, there is a shortage of mental health professionals available to the Navy.

“The nation doesn't have a whole lot of psychologists, psychiatrists, and other mental healthcare workers out there in abundance,” he said. “And by the way, when you're really in debt and you owe a lot, because that's what it took to become a psychiatrist …the kind of debt you have doesn't lend itself necessarily to come to the Navy.”

Smith told the sailors of the Washington about his divorce last year, and how he sought mental health care, only to be told he’d have to wait six weeks.

“I was like, well, I'm gonna be in a very different place in six weeks,” he said. "So I think I'm gonna, I'm gonna take care of myself cause I can afford to." Smith didn't say if he obtained care outside the Navy.

In a letter to the Chief of Naval Operations, Luria highlighted the need for mental health care.

“The availability of chaplains, psychologists, counselors, and leaders to assist is an important first step,” she wrote

Luria told reporters the difficult process of overhauling ships is a continuing reality of Navy life.

“If you look at the eight additional carriers that are either built or being built right now,” she said, “That's at least the next 40 years, and certainly beyond, that we'll have sailors who are asked to work in this kind of environment.”

The work on the Stennis is scheduled to last through 2025.