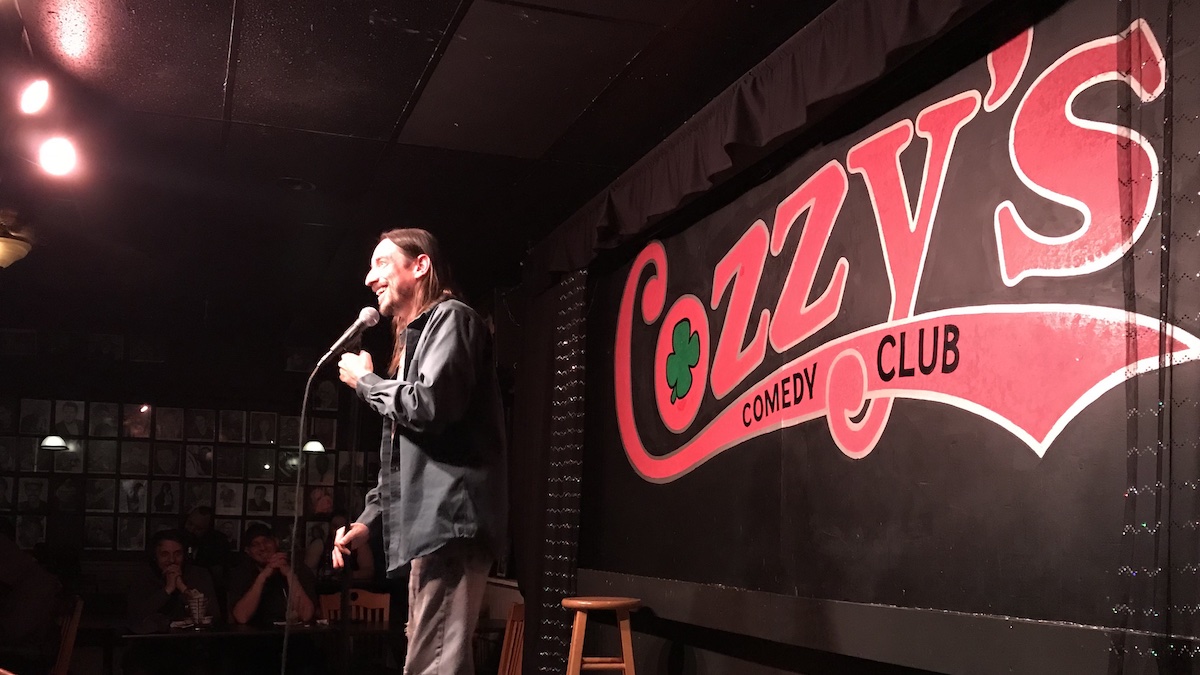 Photo by Paul Bibeau. Sid Bridge, one of the open mic hosts, works the crowd at Cozzy's.

Cozzy’s Comedy Club has been on the Peninsula for more than 20 years. The open mic night has been a Thursday fixture for a long time. It shut down along with the rest of the world in 2020. Earlier this year, it came back with Bridge returning to share hosting duties with Jounte Ferguson.

He told the crowd they shouldn’t heckle a bad comic; there’s something so much worse they could do.

“[T]he only thing I ask when the material is not good, when a joke sucks, is that you just be quiet. Yeah. ‘Cause that kills the comic on the inside.”

Sitting among the audience in the safety of the dark club, I knew exactly what he meant. On two separate occasions, before I had my current job at WHRO, I was up on that stage. Both times I thought I had good material. Both times the silence felt uglier than a junior high breakup.

Bridge has been hosting the open mic for at least six years, and he knows the wall of silence is what his comics needed.

“‘Cause if you heckle they'll blame it on you, and they won't write a better joke.”

The way Bridge sees it, open mic is about survival.

“There are always people who bomb their first time. But they come back, and they keep coming back… You can start out terrible, and you can get better.”

Not everyone comes back. Bridge guesses there is a 95% attrition rate – comics who come out of classes, take a few shots at the open mic and then vanish in a year. But not all stories end this way, he added. The open mic can also be a place to hone material and prepare for better gigs.

The show has its own story of survival. When COVID-19 hit, Bridge took a group of the comics online. They traded jokes and premises and worked on material. Across the country some comics blew up on social media or did Zoom shows. But it was tough to keep live venues going, he added.

Open mic started back up earlier this year. At first, barely more than a dozen performers showed up, but Bridge said the weekly event has been rebuilding as the roster has filled out in the last few weeks; sometimes, more people sign up than Bridge can fit into the time slot.

“[The open mic is] getting its legs back.”

Bridge said it was important to limit the roster to around 20 people so each performer could get a full five minutes. Three minutes is long enough to get exposure, he added, but just that. With five minutes, comics can develop into better performers.

“These up and coming comics,” she said, “they have no place to work out their bits.”

But people came to the club for different reasons – not all of them about building a career.

For Nichole Matthews, performing on stage has been a way to decompress after an intense job during a unique time. She was emergency manager for Albemarle County for 18 months, starting just after the pandemic hit.

“After that, I decided just to take a little rest,” she said.

On the night I visited, Matthews delivered a set about her teenage daughters, her cats, her ex-husbands and her love of witchcraft.
It might not have been the persona one would expect from someone helping lead a community through a pandemic. And maybe that’s the point.

For engineer Patrick Washburn, who goes by the stage name Meat-Hammer, it’s “a bucket list thing.” He said he comes to Cozzy’s for the camaraderie. Sometimes he signs up to perform, and sometimes he is just part of the audience.

Before the show, Bridge took the performers into the parking lot to give them a pep talk. He said he wouldn’t censor anyone, but urged them to use their judgment and avoid gross humor, because people were trying to eat here. He said he’d flash a warning light when they had one minute to go.

He also emphasized how the performers were also a large part of the audience. They were there to help each other.

“Please be the audience,” he said. “Be in there, watch the show, enjoy. Laugh. Listen.”

NOTE: Produced with assistance from the Public Media Journalists Association Editor Corps funded by the Corporation for Public Broadcasting, a private corporation funded by the American people.