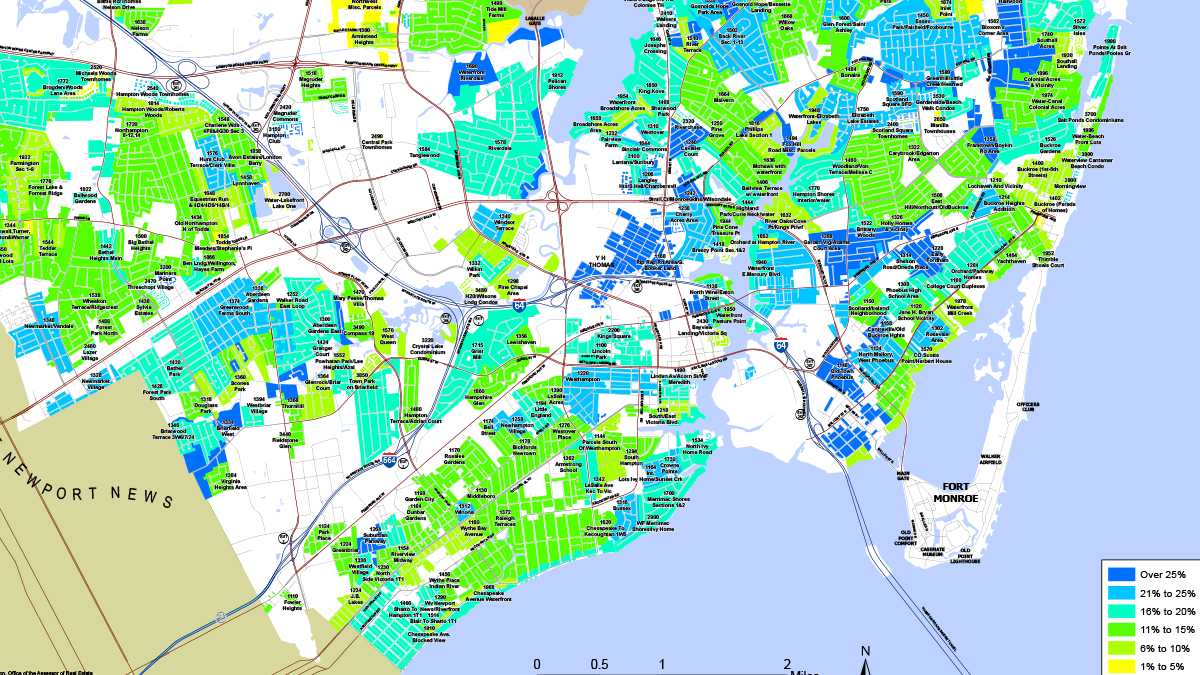 Home values have increased an average of 16% across the City of Hampton. Some neighborhoods have seen increases north of 25%. (Courtesy of the Hampton Real Estate Assessor)

Hampton Roads homeowners will pay more in taxes - even where tax rates are going down. Here’s why.

As anyone shopping for a house right now can tell you, real estate values have spiked virtually across the board.

It’s part of a growth trend that started before the pandemic but accelerated dramatically since COVID-19 hit.

As a result, homeowners across the region should expect to pay hundreds of dollars more in property taxes next year — even in cities where leaders are talking about cutting taxes.

“When we had to raise the real estate tax rate in fiscal 2014 because of real estate value declines, we made a commitment to lower the rate when values ultimately increased once more,” Bunting told Hampton’s City Council on April 13.

Bunting’s proposal would slash tax rates in Hampton by about 5 percent. But home values went up by an average of 16 percent across the city this year, which means the average homeowner would still be paying hundreds more even after Bunting’s proposed tax cut.

With the tax cut, the average Hampton homeowner would be paying around $140 less than if rates stayed where they are now.

Bunting said previously-used budgeting formulas would recommend a smaller rate reduction, but she said city officials are worried that residents’ wages aren’t keeping up with inflation.That’s why she proposed a slightly higher reduction in the tax rate.

Suffolk and Newport News are also pitching tax cuts while seeing double-digit percentage growth in property values. Officials in both cities are talking about a two-cent rate cut.

Norfolk, Portsmouth and Chesapeake are expected to keep their rates the same, even as property values increase by between 8 and 14 percent on average across those cities.