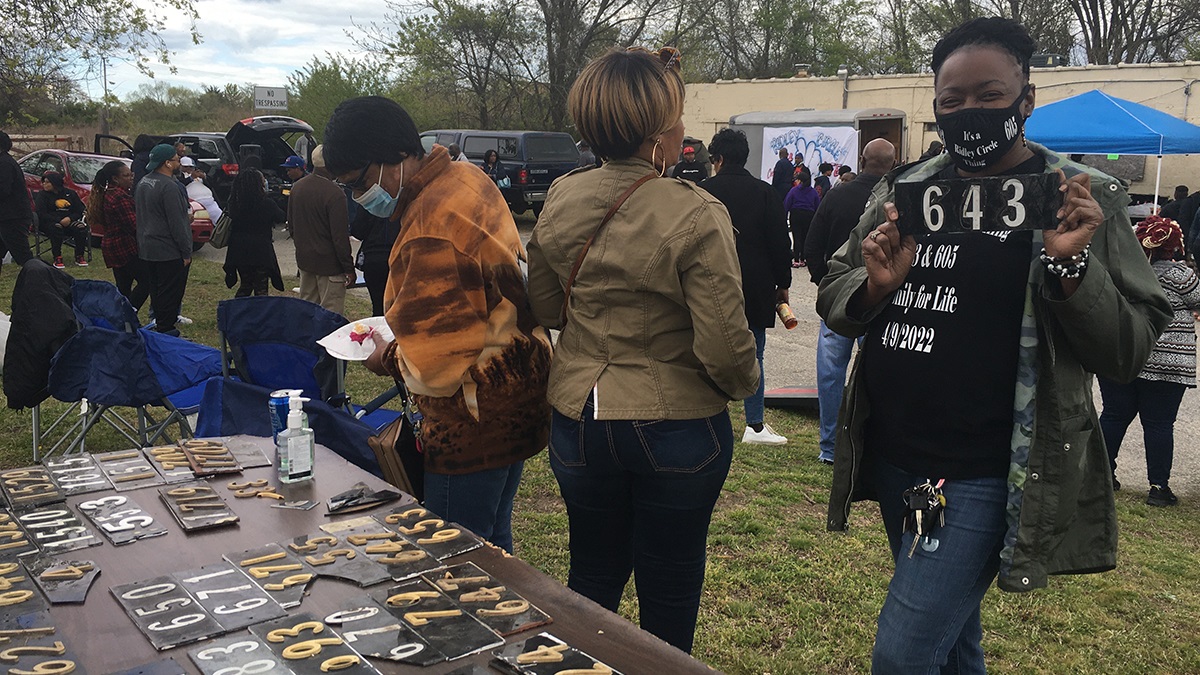 Carla Lewis holds up the address placard from her family’s apartment in Ridley Circle. (Ryan Murphy)

Carla Lewis was almost giddy when she found her number.

A couple dozen plastic placards were laid out on a table on a Newport News streetcorner, each with three digits.

They were address plates, the kind that would be mounted next to someone’s front door, salvaged from the apartments across the street.

As music played and people danced and laughed around her, Lewis proudly held up number 643, which also emblazoned her t-shirt and face mask.

It was the number of her first apartment in Ridley Circle, the Newport News public housing neighborhood a stone’s throw from the city’s shipyard.

Lewis said the plastic numbers remind her of her oldest brother, who died last year.

“Every time I see that I can remember the five kids in that one apartment, you know, and my mom doing the best that she could. And, you know, getting along some days and not getting along others,” Lewis said. “That will always be with me when I see that plaque.”

The table was set up at a cookout on Saturday afternoon that was equal parts reunion and goodbye for a neighborhood being torn down.

Across the street from the cookout, the Ridley Circle apartments sat dark. Everybody’s been moved out. The neighborhood’s being redeveloped.

Marcus Anothony is one of a group of guys dedicated to keeping the culture and memory of the neighborhood alive.

“They are tearing down the place where we grew up,” Anthony said, standing in front of a banner that read ‘Ridley Circle 4 Life.’ “We thought it would be fitting for us to celebrate everybody that grew up in these projects, the ones that are still here and the one’s who aren’t.”

Anthony is a member of the Groove Phi Gents. It was a step group that performed at events in the 80’s, when most of the members were teenagers living in Ridley Circle.

They don’t step much anymore, but members of the group have been putting on events like this cookout as a way to maintain the bonds formed in the neighborhood decades ago.

John Wilkes, another of the Gents, said many who lived in Ridley Circle got moved around and separated.

He pointed out that when they were growing up in Ridley Circle in the late 70s and 80s, lots of positive things were going on, like the Gents step group.

Ridley Circle eventually earned a reputation as an epicenter of crime and violence in Southeast Newport News. But that wasn’t on anyone’s mind Saturday, as the music played and old friends swapped memories.

But walk half a block north of the party, and you’d find backhoes sitting among huge piles of rubble. Demolition started in February.

Lewis, who found her apartment number, said she was sad to see it go.

“It means a lot because that's where it started for me, and to see that it is no longer going to be and nobody else can come into that place and reside there and call it their home or call their starting point,” she said. “This is going to be with me forever.”

Lewis moved out of Ridley Circle long ago. She only lives a dozen or so blocks away, but it's been a decade since she stepped foot in the neighborhood.

She came back to take a look around when she heard demolition started.

“It's sad because so many memories here, you know, growing up, you know, teenager, those are your impressionable years … but hopefully it'll build  something better and that the neighborhood will come up,” Lewis said.

The area is set to be bulldozed and rebuilt with both homes and commercial space. The city and housing authority are pouring nearly $60 million dollars into the effort.

But some worry about what’s to come.

“Don't take us away from where we came from. If you can build it up, bring us back. Let it be ours, not someone else's.”