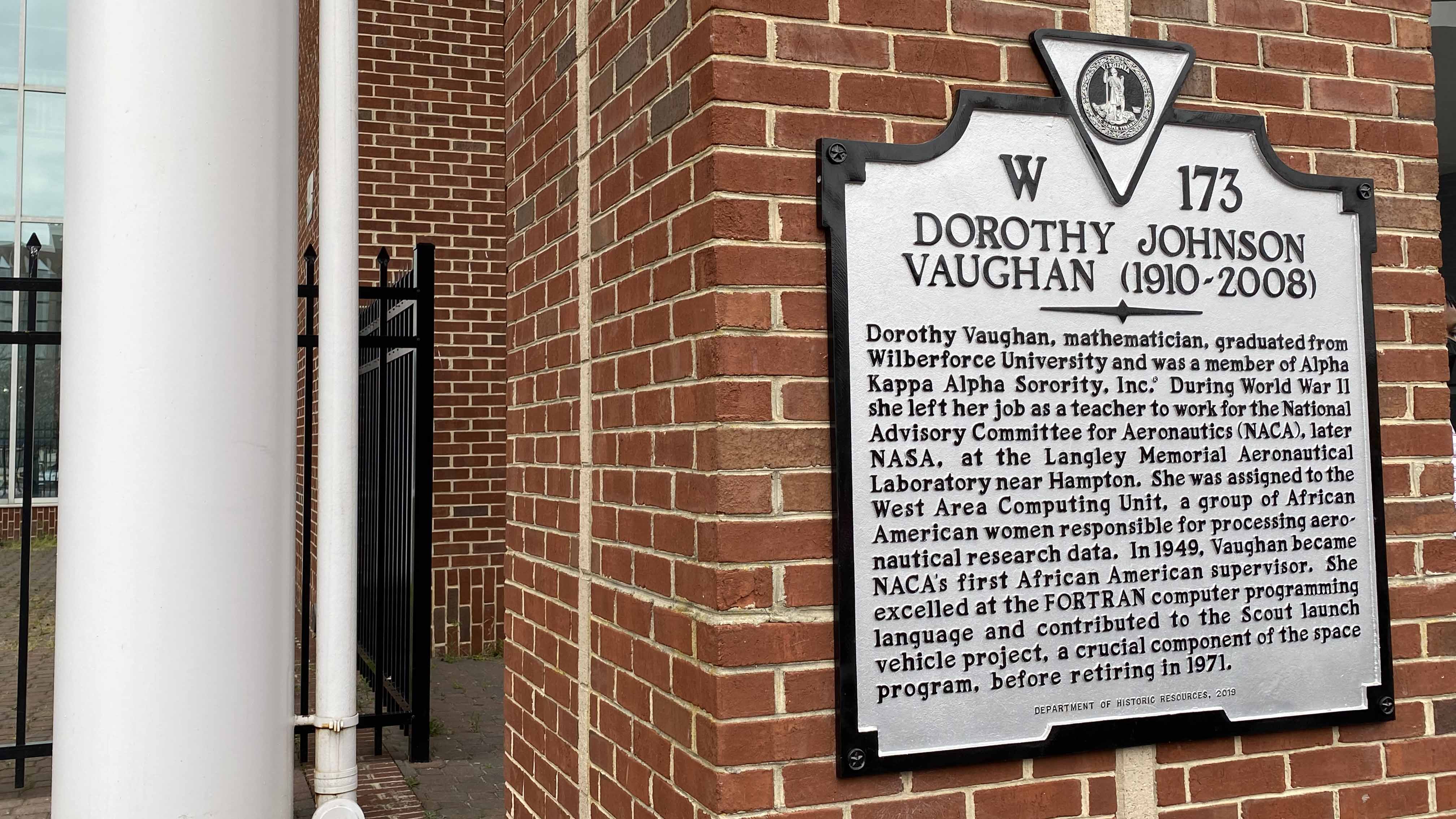 Photo by Katherine Hafner. One of the historical markers unveiled at NASA Langley Visitor Center in downtown Hampton on Wednesday, March 23, 2022.

The Oscar-nominated film came out five years ago, based on a book of the same name by Hampton native Margot Lee Shetterly.

It tells the story of Katherine Johnson, Mary Jackson and Dorothy Vaughan, among the first Black women who worked as mathematicians at Hampton’s NASA Langley Research Center.

They did crucial calculations for early rocket missions in the mid-20th century despite facing rampant racism and sexism.

This week the three got permanent recognition in downtown Hampton. A state historical marker for each went up on the side of NASA Langley’s Visitor Center on Settlers Landing Road.

That’s thanks in large part to members of the historically Black Alpha Kappa Alpha Sorority, Incorporated. Johnson, Jackson and Vaughan were members of the sorority.

When the Hidden Figures movie came out, retired teacher Pamela Ponton went to see it with some of her AKA sisters and learned the three characters were from Hampton.

“They shopped here. They went to church here. This was their city,” Ponton said. “And now they’re known worldwide. So we’re very, very proud.”

She thought they deserved recognition in Hampton and started the application process for the historical markers.

“It has taken about five years, but finally, we are here,” she said.

On Wednesday morning, about 200 people packed the lobby of the Langley Visitor Center for an Alpha Kappa Alpha-led ceremony unveiling the new markers.

It included remarks from Shetterly — the author of Hidden Figures — family members of the three women, Mayor Donnie Tuck and others.

“Many of us have questioned, why was it hidden? Why were they hidden figures up to this point?” said Clayton Turner, director of Langley Research Center. “I would contend it was revealed when it was needed to be revealed. We know about them now because we need to know about them now.” 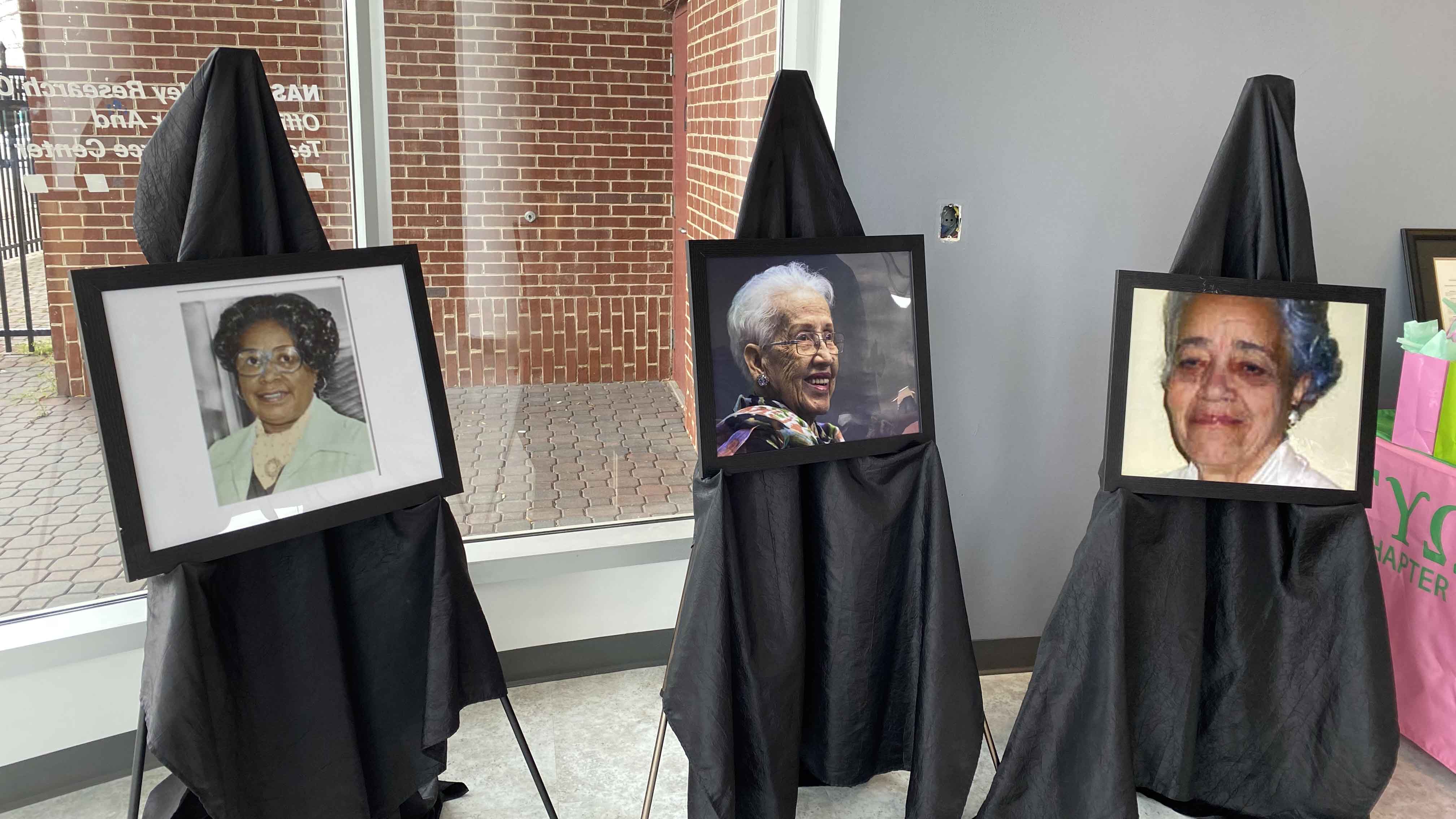 Vaughan had joined what became NASA during World War II after leaving her job as a teacher. She was assigned to the West Area Computing Unit, a group of Black women responsible for processing aeronautical research data, according to the marker. She became the agency’s first Black supervisor and contributed to the Scout Launch Vehicle Program.

After graduating from what’s now Hampton University, Jackson became the first Black female engineer at NASA, where her research focused on air flow around aircraft. She contributed to Projects Mercury and Apollo and later invested heavily in advancing the careers of young women in STEM fields.

The three were awarded the Congressional Gold Medal in 2019, posthumously for Jackson and Vaughan, who died in 2005 and 2008, respectively.

Johnson, known as a “human computer” for her lightning-speed calculations and recall, died in early 2020 at age 101.

Councilwoman Michelle Ferebee, who works at NASA Langley, said Wednesday that she “stands on the shoulders” of the women.