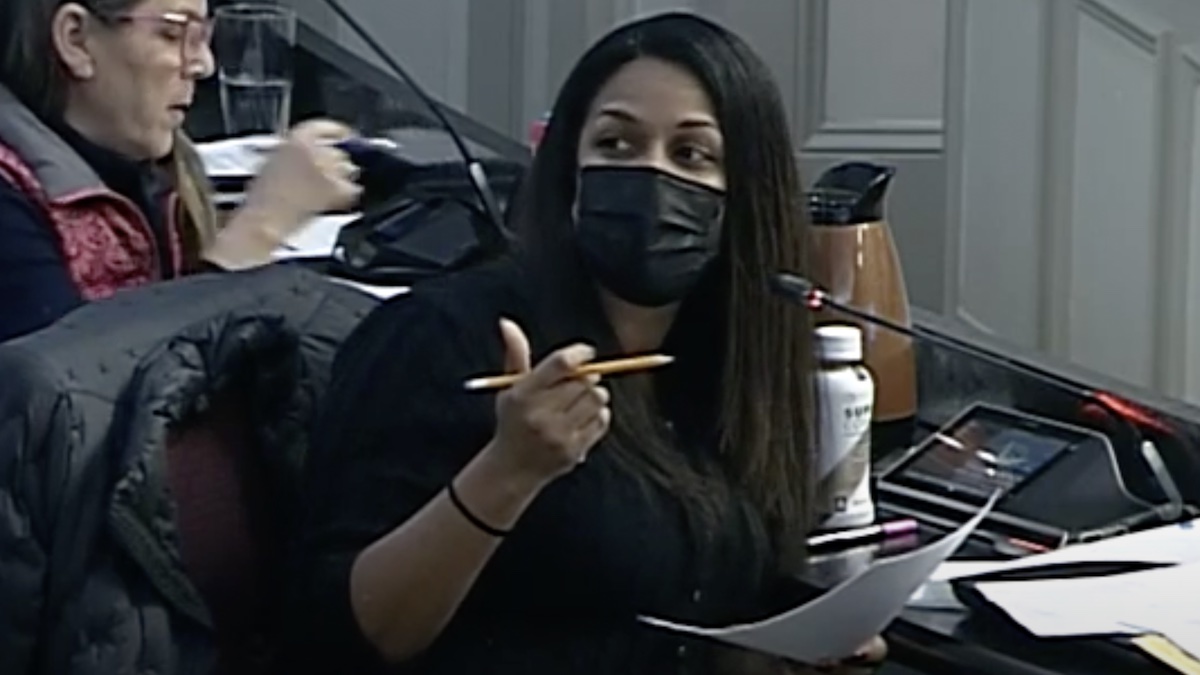 Photo by VBSchools. Virginia Beach School Board member Jessica Owens speaks at meeting on the issue of masking. Owens voted against lifting the mask mandate.

“We're working on inequalities and functions and working through triangles,” he said. “So it’s just a… typical week in our classroom.”

The week began as Gov. Glenn Youngkin’s executive order lifting mask mandates went into effect on Monday, January 24. The previous week the Chesapeake school board voted to comply with the order.

“We start our day and we go home that evening, and we come back the next day,” Davis said. “The educational process has not stopped with the optional masking.”

Davis is president of the Chesapeake Education Association. He said his group has advocated for mask usage in the schools.

But now under the new rules his teachers continue to teach.

Great Bridge Middle School was one of several Chesapeake schools that transitioned to virtual learning for a period early in the year because of COVID-19 levels. Davis said he wanted to avoid going back to that if possible.

Kathleen Slinde is president of the Virginia Beach Education Association. Before taking her position, she taught first and second grade classes. She spent time last week visiting a number of schools.

Elementary teachers who spoke to her said they felt anxious about whether their students were following their parents' mask preferences.

Virginia Beach officials asked parents who want their children to go maskless to notify the school system. But Slinde said the teachers themselves didn’t know what each student’s instructions were.

“So when the children come in, they're responsible for doing what their parents have told them,” she said.

She added it’s a good thing teachers weren't required to be “the mask police.”

But she said it means young children are responsible for taking the precautions that might protect family members back at home who are elderly or have medical conditions that make them particularly susceptible to COVID-19.

The head of the Virginia Education Association sharply criticized the governor over his executive order, as well as his decision to set up a tip line so parents could report “divisive practices” in the schools to his administration.

“Since the start of his campaign Glenn Youngkin has blatantly attempted to pit educators against parents for political gains,” VEA President James Fedderman said.

As school boards in Hampton Roads discussed how to respond to Youngkin's executive order, some officials predicted disaster. Chesapeake School Board Member Patricia King warned of “dire consequences.” Virginia Beach School Board Member Jessica Owens said she was worried about not having enough staff to continue teaching.

Slinde said COVID-19 was causing short-term shortages of teachers and disrupting education. She didn’t know how bad the situation was, but likened it to previous eras when illnesses like chickenpox would roll through schools and send large groups of people home.

“It is definitely impacting instruction when we have this happening,” she said.

Slinde added she worried that the stress of teaching in this uniquely challenging time would cause a long-term shortage of teachers.

When asked about going back to teaching herself after her term as VBEA president was over, Slinde sounded optimistic.

“I hope that I can find a spot and go back to what I love to do,” she said.

But after giving it some thought, Slinde said in a follow-up email after an interview that she may not want to get back into the classroom after all. She feels public education is under attack and she may have to settle for something less fulfilling.

“No one can stay in a position where their work is being called into question and devalued as is happening to public education teachers today,” she said in an email. “You have to finally get to a point where you say, my life and my family matter more and so teachers leave. And an incredible amount of experience and talent is leaving public education every day."

NOTE: Virginia Beach and Chesapeake public schools are members of HRETA, which holds the license for WHRO Public Media.