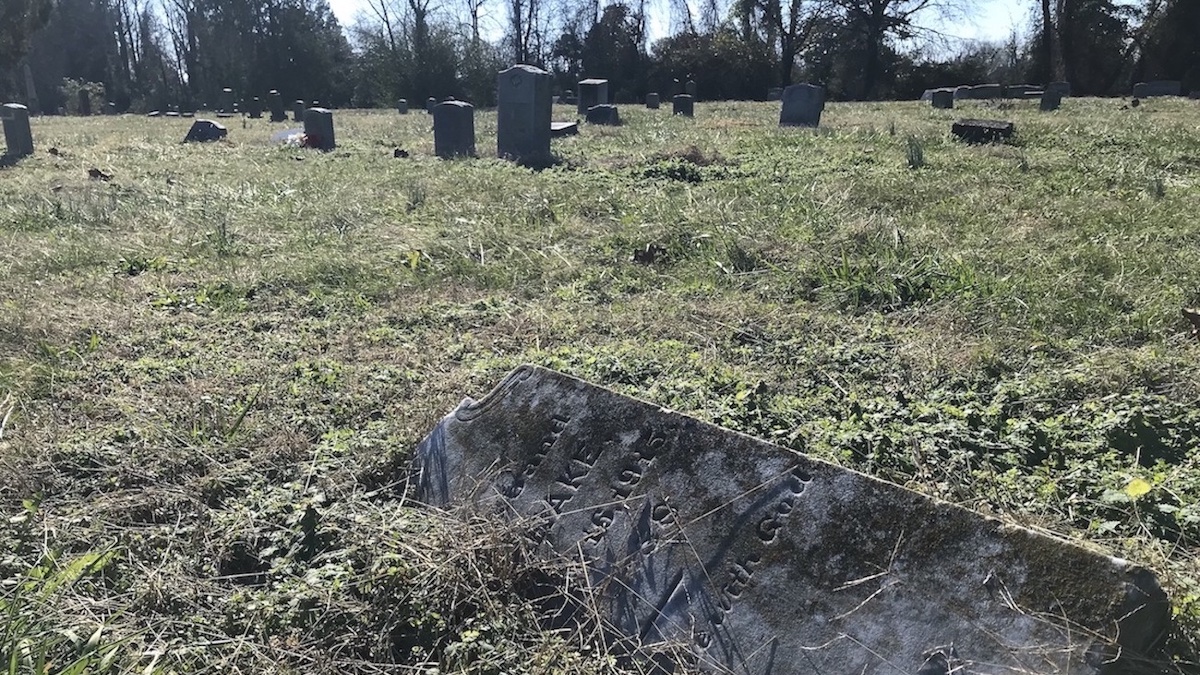 Photo by Paul Bibeau. A toppled gravestone at Pleasant Shade Cemetery in Hampton, VA. Several localities are asking the state to loosen restrictions on funding to care for historic Black cemeteries.

Artistine Lang was president of a neighborhood association on the Peninsula. She put that on the back burner more than a decade ago, she said, and started focusing on caring for Pleasant Shade cemetery with her husband Rev. Darnell Lang.

They did fundraisers and organized volunteer cleanups of park, but it was a daunting task - to clean up and care for 20 acres of overgrown, marshy territory. Over the years, volunteers have come and gone, but the park is still in need of upkeep.

“We are trying, and hopefully things will change,” Rev. Lang said. “But as it stands right now, it looks kind of bleak, I must admit.”

Virginia has a program that funds maintenance for historic Black cemeteries, allotting $5 per grave. But as a private cemetery, Pleasant Shade doesn’t qualify, even though it was the main cemetery for Black people across the Peninsula for decades.

Several cities are pushing the Virginia General Assembly to allow state funding to provide maintenance for cemeteries like Pleasant Shade, plagued by years of neglect. Newport News, Hampton, and Portsmouth, along with other localities in Hampton Roads, are requesting changes to the state law.

Pleasant Shade is in Hampton, but it isn’t owned by the city. It’s effectively been abandoned, said Mary Kayaselcuk, a historian who works for Newport News.

“Pleasant Shade has no ownership,” she said. “That has been a core issue with the cemetery – that there is no perpetual care.”

Pleasant Shade has historical importance to Black community on the Peninsula, according to Kayaselcuk, and the historical record is fading away.

Jessie Rattley, the first and only Black woman to serve as mayor of Newport News, is buried there, as well as other Black community leaders.

“Anyone in the African-American community would have been buried there,” Kayaselcuk said. “They're doctors, they're lawyers, they're dentists, they're ministers... it runs the gamut.”

According to Kayaselcuk, at least 5,000 graves at Pleasant Shade are still unidentified.

Charles Johnson, Jr. president of the African American Historical Society of Portsmouth said many Black cemeteries have always been private – so, like Pleasant Shade, they’re not covered by current state law.

“It took some political pushing,” he said, to get the city to officially recognize the cemetery so it could be eligible for funding.

According to the Langs, such funding is crucial to maintain the regular upkeep required for Pleasant Shade.

Rev. Lang said volunteer groups from churches or the military made efforts over the years, but military personnel constantly move away from the area, and churchgoers get older or die as time passes. COVID has disrupted maintenance as well.

According to Johnson, the state funds help – but even with the money, it’s a challenge to maintain these historic sites. Johnson said there are “major gaps” in maintenance at his cemetery, even with their eligibility.

“Five dollars? To take care of a historical site? That's not even realistic,” he said.

Rev. Lang estimated that it would require $35,000 a year to keep Pleasant Shade in good condition. If all 15,000 of the graves at the cemetery could be identified and recognized by the state, the funding would cover that.

According to Kayaselcuk, the ongoing effort is important to preserve the history of Black people in Virginia.