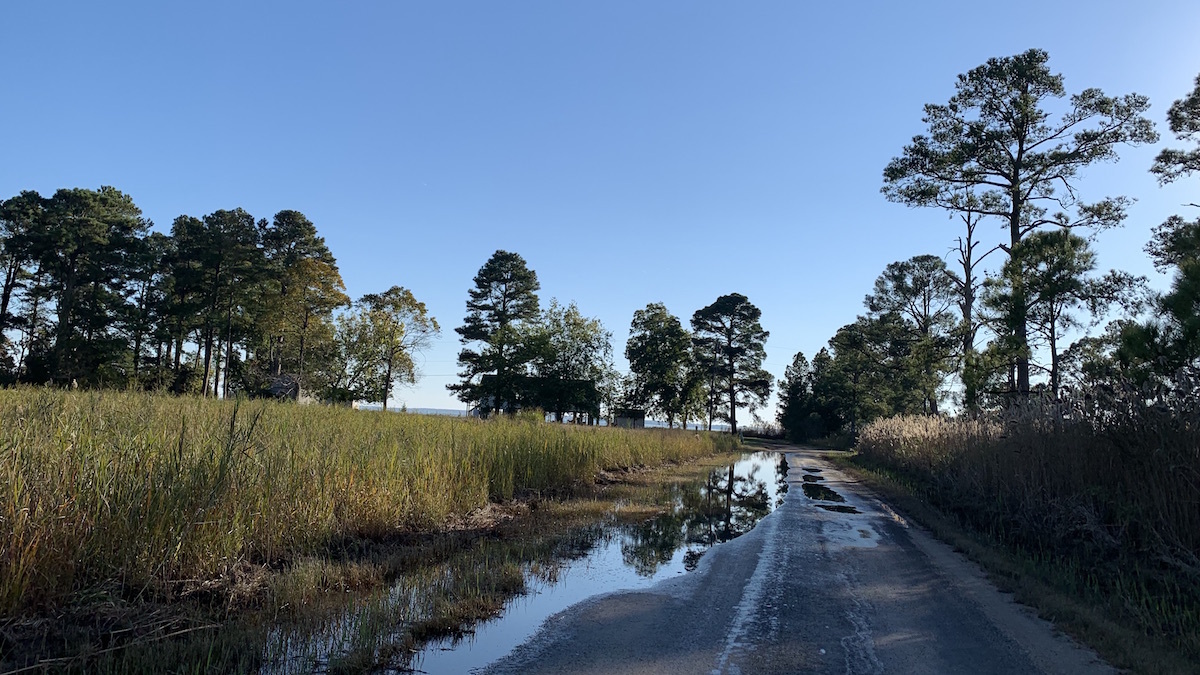 At A Crossroads: Sea level rise is compromising septic systems around coastal Virginia

This story is part of “At A Crossroads,” a WHRO Public Media series exploring how coastal Virginia is dealing with higher waters due to climate change. The project is funded by the Pulitzer Center on Crisis Reporting as part of its nationwide Connected Coastlines reporting initiative.

When it rains for a few days in a row, Roosevelt Jones can’t use his bathroom. Water fills the septic system in the yard, sewage gurgles up into the bathtub, and the toilet won’t flush.

“So, you imagine you’re sitting up about two o'clock in the morning, and then you get the urge to go use the Number Two,” said Jones, who lives in Suffolk. “A whole lot of time you have to hold it.”

Jones, a former union organizer, is 80 years old. When holding it gets unbearable, he goes to one of the churches where he does custodial work.

There are more than a million septic systems in Virginia, many of them designed like the one on Jones’s property. When the toilet flushes, the waste is supposed to go into an underground tank. Gravity then pulls it into the soil where microbes treat and process it.

But if the land is too wet, the process fails and waste overflows into surrounding areas.

Experts say that’s becoming more common across coastal Virginia, where sea levels are rising at the fastest average rate on the Eastern Seaboard.

Soggier soils due to persistent flooding — along with heavier rainfall and aging tanks — are expected to cause more widespread septic failures over the next few decades. Historically marginalized Virginians could bear the worst of it.

He and many of his neighbors, who are predominantly Black, have been trying to get better sanitation for decades.

Many residents previously used outhouses before installing septic tanks. Conversations about a proposed sewer line — which would connect the neighborhood to municipal wastewater — date back to at least the 1970s.

Not surprisingly, Jones said the smell is “awful” when his septic tank backs up.

It’s not just a nauseating inconvenience. High exposure to septic fumes can cause breathing problems and other health issues. Failing systems can also leak raw sewage into nearby creeks and rivers, contaminating them with bacteria, viruses, and nitrogen.

Suffolk has done drainage work to help ease flooding, but developers have built new housing that pushes stormwater into people's yards. Residents say the flooding has never been worse.

For Jones, the septic system problem seems to go away when the ground is dry. But with sea level rise, experts say there are many places in coastal Virginia where the ground may never dry.

“What we see is that the water table, the groundwater table, is rising,” said Molly Mitchell, a researcher at the Virginia Institute of Marine Science. “If [the system] was installed 30 years ago, the conditions surrounding the septic system have changed since that time. And so you might not have…the level of treatment from the sediment that you had when the system was installed.”

Although many of the state’s systems are considered beyond their lifespan, Mitchell said exactly how many are at risk is hard to know for sure.

Researchers don’t know precisely where all the tanks are. Only a portion of the state’s data on these systems is digital. The other records are on paper, filed away in local government desks. State officials are piecing together available information to expand its database, but for many septic systems, there simply are no records.

As for how sea level rise will impact septic tanks in the future, Mitchell said it will be a gradual process.

“It's going to be one property at a time. But it’s still going to be a lot of properties,” she said.

Existing problems are expected to worsen in Suffolk, Chesapeake and southern Virginia Beach. But it’s rural shoreline communities — such as the Middle Peninsula, Eastern Shore, and Northern Neck — that could face the worst septic problems.

Tom Hogge has experienced these issues firsthand. He built his house in the low-lying Guinea Neck area of Gloucester County in 1995. Within the first few months, sewage was coming out of the ground.

“Brand new home, couldn’t flush the toilet. Washing machine, couldn’t use that,” he said. “Down in this area it’s terrible for septic systems.”

Eventually, the county put in a public sewer line, solving Hogge’s problem. But that’s not always practical in areas where houses are far apart. Other coastal residents need a special, high-tech septic system that can better withstand flooding.

That’s exactly what Robert Hutchens was recently installing for a resident on a waterfront property in Gloucester County.

“We're upgrading an existing system that has failed here. It was constructed in the 1960s,” Hutchens said, standing next to his excavator.

The new system treats waste with coconut husks and can cost as much as $50,000. Hutchens knows that’s out of reach for most people.

Access to sanitation is a huge equity issue across the country. In many areas, it affects people of color — particularly Black residents — more than white people.

Historians say that’s partially because after the Civil War, many freed slaves could only acquire property that flooded easily. That same land has been passed down over generations.

“The people that are seeing the problems first and foremost, were those that are victims of structural racism, or were mandated by racial covenants in terms of where they could settle,” said Catherine Coleman Flowers, a national sanitation activist who serves on an environmental justice advisory council for President Biden.

Today, marginalized residents are vulnerable to legal consequences. Unaddressed septic issues can mean fines — even criminal prosecution or eviction — so, many people don’t come forward for help. But officials say it’s rare in Virginia to actually bring people to court over this.

“If granny has a failed septic system, [a] commonwealth attorney is not going to take granny to jail,” said State Delegate Keith Hodges, who represents the Middle Peninsula.

“We always are in an enforcement posture,” added David Fridley, a manager for the Three Rivers Health District. “But the real goal is always to solve people's problems and connect them with resources.”

Solutions in the works, but questions remain

Localities provide grants and loans for homeowners for routine septic service, which is required every five years for people living in the Chesapeake Bay Watershed.

But that assistance does not always reach the people who need it. The Northern Neck Planning District Commission has had a septic pump-out program for 15 years, but in its entire history — and out of a population of about 50,000 — just 800 people have asked for help, according to commissioner John Bateman.

“A lot of times, people are certainly reluctant to come forward when they have wastewater issues. Especially if they can't afford the repair,” noted Lance Gregory, director of the Virginia Department of Health’s division focused on septic issues. “So that’s I think really critical for us, is building that trust with the community.”

Virginia lawmakers are working on solutions. A new law this year set up a statewide fund to help with repairs and replacements. State officials also will start considering the impacts of sea level rise when issuing permits for new septic tanks.

The officials say it’ll be a game changer that could be a model for other coastal states with septic issues.

Some activists, including Flowers, are skeptical.

“I've been doing this for over 20 years,” she said. “And everybody has the next best thing, and it hasn't worked and they're right back where they started. And the money has been spent, the engineers and all the other officials that charge fees make money and they move on. And the homeowners are left holding the bag.”

Skip Stiles of the Virginia environmental non-profit Wetlands Watch also wonders what happens in the long run. While he’s supportive of the state’s efforts, he’s not sure whether it’s worth investing in new septic systems in some areas.

“If you're along the shoreline and your septic system is flooding from underneath, it's sort of like a canary in the coal mine for the fact that within a decade or two your house is going to flood,” Stiles said. “And it will be so compromised that we may not want to continue to support people living there. That's going to be the hardest problem.”

More coastal communities will have to face that dilemma soon. By 2060, much of the Middle Peninsula, Eastern Shore and Northern Neck could be underwater.

There are people already dealing with that now, though.

Like Roosevelt Jones, the 80-year-old from rural Suffolk. Rainstorms flooded him out last Christmas, and now he’s afraid that will happen again this year.

“And I won't be able to use my bathroom,” Jones said.

Jones and his late wife, Catherine, were leading a push to get Suffolk to extend a sewer line to their community and address the flooding problems. That way, their neighbors would never have to deal with a septic back-up again. But, since she died in August, the effort has lost momentum.

Diana Klink, a city of Suffolk spokesperson, told WHRO that a recent petition for a new sewer line for Jones’s community did not receive enough support. But she said Suffolk has designated $14 million in federal Covid relief funds for water, sewer and stormwater upgrades for the area.

Jones doubts that will resolve his problems.

“Seems like to me, I’ll be on my way out like my wife before they even get it done,” Jones said.