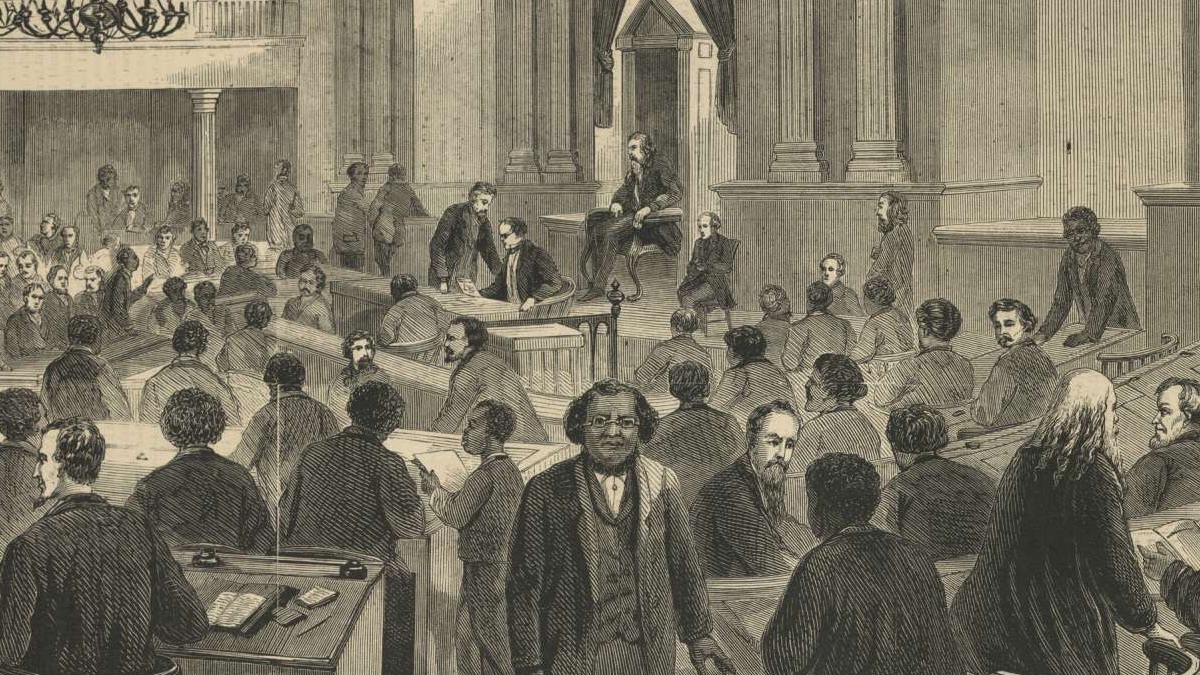 Photo from the Library of Virginia. Willis Hodges (bottom center, in eyeglasses) was a Black political leader from Princess Anne County who participated in the 1867 Virginia constitutional convention.

It was a November evening in 1878, just outside a Kempsville polling place and the political headquarters of the local Democratic party organization, which opposed Reconstruction policies.

A crowd of Black activists and white political operatives faced each other in the street, armed with clubs and guns. They were arguing over the vote amid rumors of a stolen election.

During this loud exchange, witnesses said a Black man named Willis Hodges declared that a man who’d voted for the anti-Reconstruction party ought to be “hung or in Hell.”

The argument intensified, and people opened fire on each other.

Authorities arrested Hodges. They later dropped the charges, but expelled him from Virginia.

The local paper in Norfolk called him "one of the most incendiary negroes that has ever cursed this section."

It wasn’t just the dust-up on election night that earned Hodges that title -- years before that, he formed a secret society to help enslaved people escape Virginia.

With support from Virginia Humanities, WHRO investigated the social network around Hodges to discover clues about that society for a podcast called The Secret War of Willis Hodges.

Hodges and activists like him had to operate in secrecy.

Before the Civil War, helping people escape slavery was a crime that could result in imprisonment or death from a vigilante mob. And even after slavery ended, violence against Black people, and misinformation about this violence, was a fact of life in Virginia.

We still don’t know where Willis Hodges is buried, all the details of his service in the Civil War and many other aspects of his life’s work.

What we do know is that Hodges was a preacher, a publisher and one of the delegates who created the state’s constitution. He was a close friend of John Brown, an abolitionist who shaped the national conversation around slavery and the rights of Black people.

And in Virginia, Hodges had company.

Before the end of slavery, there was a vibrant community of free Black people in Hampton Roads.They fought and worked alongside the Hodges family.

One family, the Cuffees (or Cuffeys), was related to Hodges. When Hodges’ brother William went to jail under a charge of forging free papers for slaves, Samuel Cuffee allegedly set fire to a local building in retaliation.

Authorities arrested Cuffee, but he and William Hodges broke out of that jail together and escaped north.

The Owens family also worked closely with Willis Hodges. Authorities arrested Littleton Owens alongside Hodges after the election fight in 1878. Owens was a local political leader like Hodges and fought for the Union in the Civil War.

Sandi Brewster-Walker, a scholar and descendant of Hodges, said his story has an important lesson about persistence.

“I was raised with an attitude (that) you could do basically whatever you wanted to, and if it doesn't work, you fall back and try something else,” she said. “And that's what he did. He saw a wrong and he tried to right it.”

Learn more about Hodges in the podcast, The Secret War of Willis Hodges.