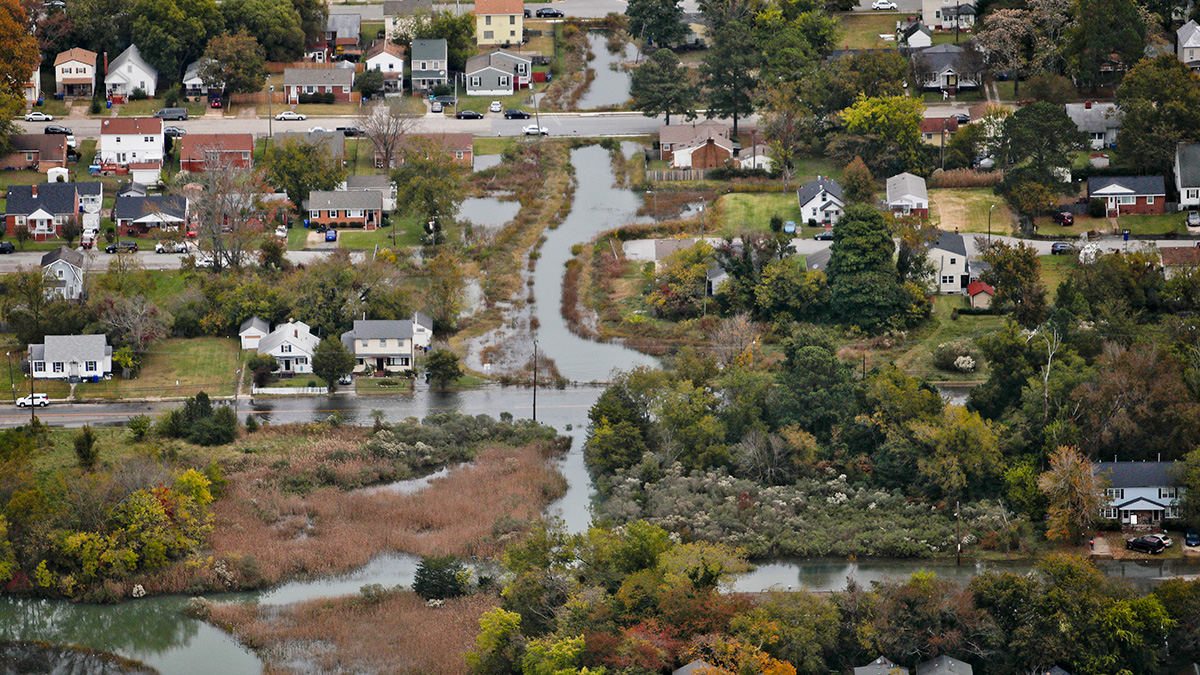 Photo by Kristen Zeis. An overhead view of Salters Creek during a king tide. The marshland that surrounds the creek used to be homes before the city of Newport News bought out the properties.

At A Crossroads: How flood buyouts changed one Newport News community

Robert Murray is proud to live in the Wilson community of Newport News.

“It’s a real, wholesome friendly neighborhood,” he said. “Everybody [says], ‘Hello.’ They always have a good word to say or something like that.”

The area is predominantly Black, a few miles from downtown with both rental housing and family homes passed down through generations.

Murray takes walks through the neighborhood and keeps in touch with the families around him. He’s been there for over five decades.

But his attitude quickly sours if you ask him about the creek running through the area — Salters Creek.

Surrounding it is a swampy thicket with lots of tall wild grasses, overgrown shrubs. The marsh often smells of dead fish, and Murray has no shortage of ways of lambasting it.

“I call it a cesspool,” he said during a walk along the creek. “It’s nothing but a mosquito haven.… It’s a cancer. It keeps growing, growing.”

The marshland used to be backyards and homes along Salters Creek. But Newport News bought out the properties — with owners’ consent — as part of an effort to move people away from flood-prone land. City officials then converted the properties to wetlands and greenspace to soak up floodwater.

Although dozens of families in the area have voluntarily accepted a buyout, neighbors who have stayed behind — like Murray — say the city’s program is slowly ruining the community.

“It’s sad to see the neighborhood go down like this,” said Veralene Dickens, who’s lived in the Salters Creek area for more than four decades. “It’s not a happy neighborhood like it was when the houses and everything was over there.”

This is a dilemma climate adaptation experts warn about as coastal Virginia localities begin retreating from flood-vulnerable land in response to sea level rise — although buyouts help move some people out of harm’s way, they also can erode the social fabric of communities for the families staying behind.

A plan to deal with flooding

About two decades ago, Newport News had a problem. Floods were inundating properties and damaging homes.

So city officials settled on an idea that was innovative at the time — pay people to voluntarily give up their flood-prone properties. If residents accepted the offer, the city would tear down the houses and never rebuild.

Since then, Newports News has acquired nearly 80 flood-prone properties, more than anywhere else in Virginia. The city pays families the assessed value of their homes and also covers some moving expenses.

Officials set aside about $200,000 annually to fund the program. If that’s ever not enough to pay for buyouts in a given year, federal grants can cover the difference.

Most of the buyouts are in the Salters Creek neighborhood.

It’s a “low-lying area,” said Kathie Angle, who oversees the buyout program. “Just on an abnormally high tide they experience flooding. And that’s going to continue to get worse.”

According to a flood projection map produced by Old Dominion University in partnership with WHRO Public Media, more than 50 homes in the Salters Creek area could go underwater by 2060. The creek itself could become part of a large channel running several miles inland from the James River.

Angle suggested projects to defend the neighborhood against sea level rise could be futile — “the water is coming toward these properties no matter what we do,” she said.

Therefore, the main goal of the acquisition program is to give families an opportunity to flee the rising water before it’s too late and their properties become worthless.

“The more and more it floods, the less likely they’re going to be able to sell their houses,” she said.

Other cities around coastal Virginia also are embracing buyouts as a response to sea level rise.

Chesapeake has acquired 42 properties. In the past, Virginia Beach and Norfolk have opted to elevate vulnerable homes. But Virginia Beach is currently working on three property acquisitions, and Norfolk has a zoning ordinance that incentivizes developers to help fund buyouts.

‘They want to get us out of here’

Rodney Jackson knows how Newport News’ buyout program has changed the Salters Creek neighborhood as much as anyone.

He still lives along the creek and has watched the city gradually demolish nearby houses and convert the lots to wetlands.

“Before they knocked everything down, there was a field back there,” Jackson said, standing in his backyard and pointing toward a thick patch of neck-high grasses. “Kids could play football. Since they redid everything. It’s just a mess now. It’s a jungle.”

Jackson’s home has never flooded, and he said he doesn’t plan to take a buyout anytime soon. But every month, he has to put on a double set of gloves and spray his yard with mosquito repellant and weed killer to keep the grasses from invading his property.

He said he usually doesn’t mind nature and knows the marsh is supposed to help absorb floodwater.

“But at least maintain it,” he said. “Because if they let it just grow wild, then the homeowner’s got to deal with it.”

During a walk around the marsh, he pointed to overgrown bushes blocking a nearby sidewalk. Someone dumped a pile of red bricks in the creek.

Murray fears the marsh is depressing property values around the neighborhood, giving residents no choice but to also accept a buyout from the city.

“A person come to buy in this neighborhood and then drive around and see this,” he said. “[They’ll say] I’m not buying in that neighborhood with that cesspool over there.”

The marshland along the creek isn’t the only byproduct of home buyouts in the community. The city is also turning other flood-prone properties into vacant lots. Nearly half of one block is empty land.

Veralene Dickens and her son Derek live in a white two-story home in the neighborhood. Red shutters surround the windows; string lights hang over the front porch; a pink rose bush in the front yard is still blooming even as temperatures drop.

But every time Veralene and Derek walk out their front door, they see empty land across the street.

“You’re making this place a ghost town…give me my neighbors,” Derek said, suggesting the city at least build a park on the vacant land for kids around the area. “It’s a lonely neighborhood.”

Derek and his mom agree the community has a flooding problem, but they don’t trust the city’s motives behind the buyouts.

“If it was in the white area, it wouldn’t be like this,” Veralene said.

“They want to get us out of here,” Derek added. “They’ll take care of the problem then.”

Some residents say the vacant lots do have perks.

Michelle Nix, who’s lived in the area since 1968, doesn’t like when houses are so close together that neighbors can see each other from their windows. She appreciates how the vacant lots create space between some houses.

Still, she would prefer that families have the option to purchase those properties and build new homes.

The city “can’t just pick up and run,” Nix said. “Why not invest in the community?”

Kathie Angle with Newport News said race has nothing to do with the property acquisition program and stresses a city ordinance prevents any redevelopment of bought-out properties.

She noted anybody can ask the city for a buyout as long as their house is in the floodplain, has a first floor that’s below the base flood elevation and was built before 1975.

“It’s completely voluntary and by word of mouth,” Angle said.

City officials can’t do much about the wild marsh surrounding Salters Creek because they use it for flood control, Angle said. But they’ll look into trimming some of it.

She added she understands why residents are upset.

“We’re trying to help people,” she said. “Is it changing the neighborhood? Yes …. Unfortunately, I can’t change the fact they live in a highly flood-prone area.”

Climate adaptation experts say this is part of what makes buyouts of flood-prone land so tricky. Although they help people flee at-risk areas, property acquisitions also disturb the culture, heritage and bonds within a neighborhood.

In fact, this has happened in most communities where governments have acquired flood-prone homes — including New York City, San Antonio and Kinston N.C — said Elyse Zavar, a University of North Texas professor who studies buyouts.

Some residents may appreciate the empty lots and even think of them as an extension of their backyards, she said. But other people within that same neighborhood may view the vacant properties as wasted space and a reminder of what the community used to be like before the buyouts.

Zavar said families in predominantly non-white neighborhoods could especially suffer. They may view their community as a safe space where they can be with people of the same cultures and ethnicities.

“So when we conduct a buyout, we’re altering the social dynamics attached to that place,” she said. “The people that make you feel comfortable aren’t there anymore.”

Zavar and Katharine Mach, a University of Miami professor who also studies buyouts, said neighbors could start to mistrust and resent the buyout program. One way to avoid that, they said — make the buyout process transparent. Consider everyone’s ideas, like what to do with that new vacant land.

“As climate hazards intensify it becomes even more important to have a community-driven vision of how they would like to manage that change,” Mach said.

She said officials plan to launch an outreach campaign to explain the program to people and ask how the city should improve it.