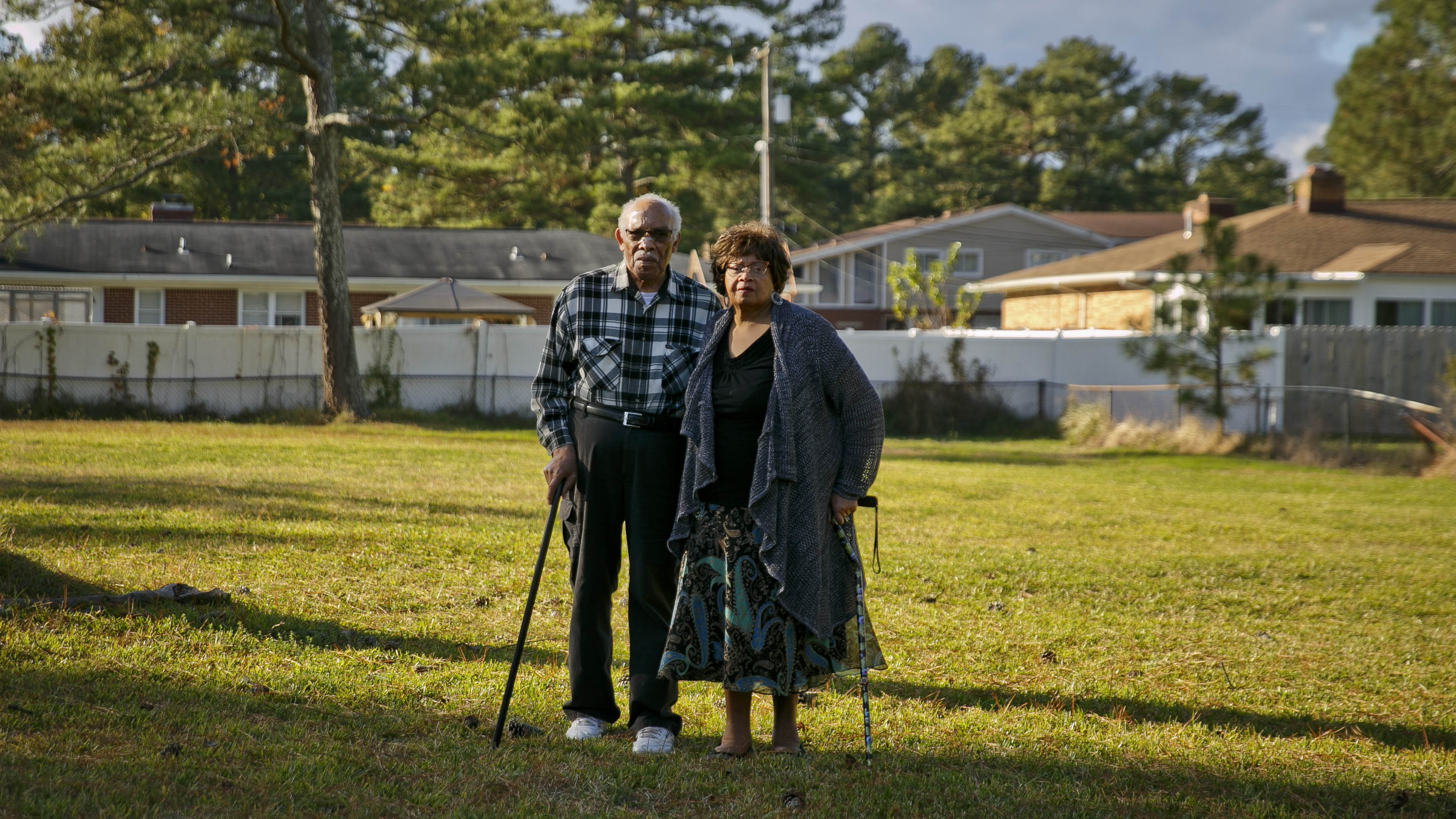 Photo by Kristen Zeis. John and Gloria Creekmur stand in the front yard of what was once their house. The Creekmurs built the home in 1968 and moved out in 2012 as part of Chesapeake’s program that buys properties that frequently flood.

At A Crossroads: Retreat from rising waters is gaining traction around coastal Virginia

Stroll through the Fernwood Farms neighborhood in Chesapeake, and you’ll notice something unusual.

Most of the middle-class suburban area is like any other with dozens of homes neatly next to each other. The Elizabeth River runs along part of the neighborhood.

Walk closer to the water, and suddenly the area looks gap-toothed with several empty lots.

Welcome to Ground Zero in Chesapeake’s quest to move people away from flood-prone land.

“So this is one. Property two is here right in between two homes,” Robb Braidwood, Chesapeake’s emergency services director, said during a tour of the neighborhood. “We’ve got a third property down there.”

Once homes that flooded repeatedly, the vacant lots are now grassy fields. Some have signs along the street — “No Dumping… Keep Chesapeake Beautiful.”

The city offers to purchase vulnerable properties at market rate. If residents agree, Chesapeake demolishes their homes and doesn’t rebuild.

“I would love to buy every house that floods,” Braidwood said.

It may sound straightforward, but the strategy — sometimes called managed retreat — has historically been unpopular among people who view it as an attack on Americans’ love of private property, especially waterfront homes.

And yet Hampton Roads localities and state officials are increasingly considering it as a response to worsening flooding.

With sea levels around the region rising faster than anywhere else on the East Coast, federal projections suggest it’s only a matter of time before some neighborhoods go underwater.

‘Retreating in a strategic way’

It’s usually up to a state or city to offer to buy out properties and then maintain them. The federal government can help fund acquisitions — over the last 30 years, the Federal Emergency Management Agency has supported more than 43,000, according to an analysis by the National Resources Defense Council.

In Virginia, managed retreat is gaining traction. State officials say there have been more than 550 buyouts statewide. Newport News leads the Commonwealth with nearly 80 buyouts, followed by Chesapeake with 42.

In the past, Virginia Beach and Norfolk have been slower to embrace the strategy, instead opting to elevate homes.

But Virginia Beach is now working on three property acquisitions, and Norfolk has a zoning ordinance that incentivizes developers to help fund buyouts.

“We’re trying to create for [residents] a free market condition that allows them to gracefully retreat if and when they want to make that choice,” said George Homewood, Norfolk’s planning director.

State officials also have indicated that relocating people away from the most vulnerable areas will be part of Virginia’s coastal resilience master plan due to be released by the end of the year.

Government officials are realizing that some neighborhoods aren’t worth saving as sea level rise accelerates and the cost of flooding grows.

The National Oceanic and Atmospheric Administration projects sea levels around coastal Virginia could rise at least 2 feet by 2050 and nearly 7 feet by 2100. Thousands of homes around Hampton Roads could go underwater over the next six decades, according to a flood projection map produced by Old Dominion University in partnership with WHRO.

Localities can try to extend the life of some communities by raising sea walls and installing flood pumps. And if there’s a flood, the government will help people with federal flood insurance rebuild.

However, A.R. Siders, a climate adaptation professor at the University of Delaware’s Disaster Research Center, said staying in the most at-risk areas doesn’t make sense.

Federal flood insurance rates are increasing to the point that some people may no longer be able to afford them. Also, why spend money rebuilding and defending if the property will inevitably go underwater and become worthless, Siders said.

That money instead can go to developing new, safer communities — maybe inland.

“For every dollar we spend on managed retreat, the estimates are that you save four to eight dollars. So that’s a pretty incredible return on investment financially in terms of avoiding those losses,” Siders said.

That’s essentially Braidwood’s pitch when he offers to buy out a Chesapeake home — it’s a win-win for the family and the government.

“So we as a city would love to have a sort of uniform approach where we can have neighborhoods that are retreating in a strategic way, and then we’re done,” he said.

Fernwood Farms was a swamp before Chesapeake developed it in the 1960s. Now the water is taking the area back.

Rainstorms and king tides can turn streets into lakes. Bring in a hurricane or nor’easter, and living rooms become swimming pools.

Braidwood noted that some families don’t accept his buyout offers. But those that do are sick of the flooding and fear sea level rise.

For example, Gloria and John Creekmur and their daughter Kim currently live in a two-bedroom condo in Chesapeake. It’s cozy with velvet furniture, paintings of flowers, some potted plants out front.

But it’s not where they thought they would be.

In the 1960s, Gloria and John built themselves a red-brick ranch-style home in Fernwood Farms on a cul-de-sac near the Elizabeth River. John, who worked in construction, designed the house himself, and Gloria loved the big windows and huge yard.

“It was like we had birthed the baby before we had children,” she said. “We were very prideful about our home.”

Then the flooding started, and water repeatedly destroyed their cars and invaded their home. Over time, it all added up to hundreds of thousands of dollars in damages.

Hurricane Isabel in 2003 was especially bad.

“There were fish and crabs from the river in our house,” Kim said. “The water came up, and it stayed up for like two or three or four days.”

“I just fell in a chair and cried,” Gloria added.

When Braidwood came around, they couldn’t turn down his offer. They sold.

Gloria told John as they were deciding where to move that she would never live near water again, not even a pond.

“It was so devastating,” Gloria said. “I feel a little sadness, but can’t live in the past. Still, I keep the memories — the sweet memories of a beginning of a dream, a dream home. Our first home.”

Despite the benefits of buyouts, Siders, the Delaware professor, says they come with barriers that can make them inequitable and prevent them from happening more often.

Although the federal government often helps pay for property acquisitions, funding is limited. That can leave localities with two options — help as many families as possible by offering them less for their homes or assist fewer people but pay more for their homes.

Some cities and states have addressed the money problem by creating their own long-term funding mechanism.

The city of Newport News, for example, allocates about $200,000 in their annual budget to cover a few buyouts each year. Braidwood said Chesapeake hasn’t done that because the city would rather use federal money than it’s own.

Another challenge comes with the strict federal application process, which can make it hard for some households to qualify for a buyout. A family should be current on their mortgage and their house has to have flooded in the past.

“So a number of programs describe people who are initially interested in the buyout but they stop being interested,” Siders said, adding that it can take years to deal with federal bureaucracy.

Local politics also play a significant role because homeowners can only pursue a buyout if their government has set up a property acquisition program. Despite the increasing acceptance of buyouts, some localities remain skeptical of them or are concerned they could reduce the local tax base especially if bought-out property owners move to another city.

Gloucester County used to acquire flood-prone properties with federal funding — 29 actually. Then, several new members took over the county board of supervisors and ended the program in 2018.

“We don’t want to get involved in any kind of real estate ownership,” said board member Phillip Bazzani, who led the revolt against the buyout program. “I’m a conservative libertarian, so I want the government to just leave me alone.”

The other challenge is that property acquisitions around coastal Virginia remain voluntary. So in a region where people like fishing and kayaking from their backyards, many residents aren’t ready to sell their properties to the government.

Take Addie Redd and her husband, who have lived in their single story home on the Elizabeth River in Norfolk’s Ingleside neighborhood for two decades.

A few years after buying their house, Hurricane Isabel inundated their crawlspace, destroying their floors — more than $30,000 in damage, a lot of which was covered by flood insurance.

Then, a second flood ruined her washing machine and dryer — another couple thousand dollars.

Now, flood projections show her house underwater by 2060. And yet, she has no plans to say goodbye.

“We want to live on the water,” Redd said. “Any water that you move to in the area is gonna be the same thing at some point, right?”

Climate adaptation experts say many properties don’t need a buyout immediately. But they add it’s critical that cities at least have a plan for what to do with them in the future.

Because if not, people will eventually end up stuck with worthless flood-prone properties that nobody wants to buy.