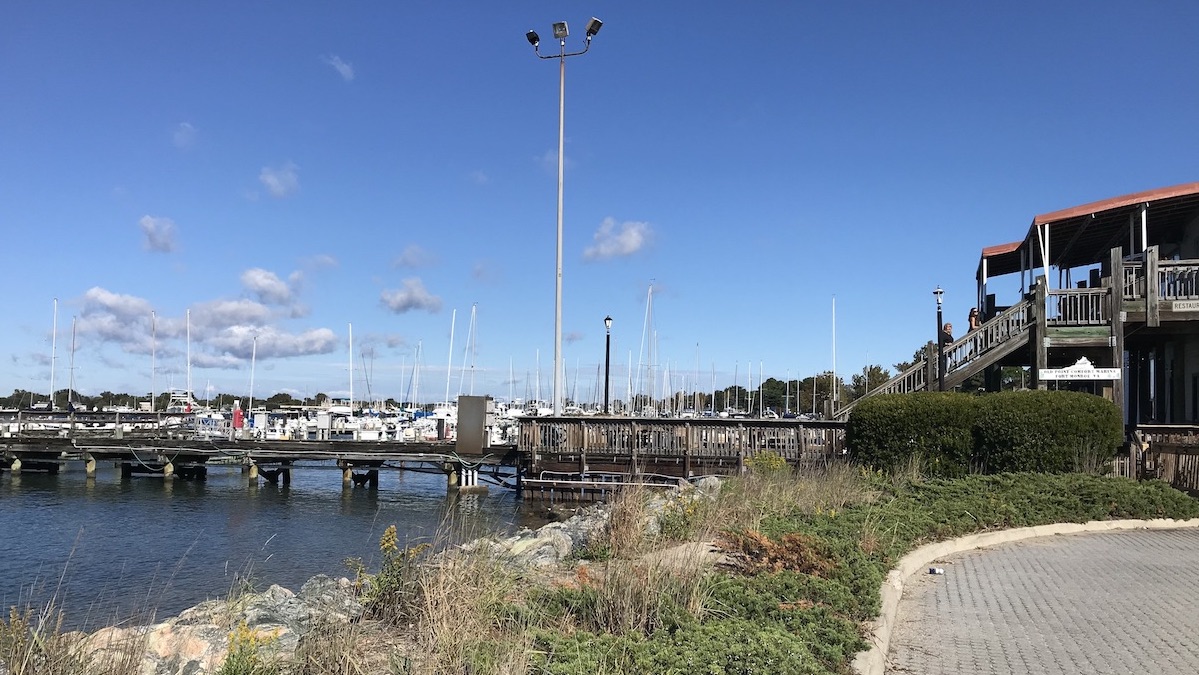 Photo by Paul Bibeau. The Old Point Comfort Marina at Fort Monroe, where the development will take place.

A hospitality company is one step closer to transforming the Fort Monroe area with a 90-room hotel built over the water, a 500-seat restaurant, a remodeled marina and a conference center that can cater to 250 people.

The Virginia Marine Resources Commission voted 7-1 to allow Pack Brothers Hospitality, LLC to transform the marina at the historic Hampton location. Christy Everett of Norfolk was the lone opposition vote.

She said the VMRC should require the project to go through a permitting process to assess impact to surrounding wetlands. No permit is required for government projects, and the land is owned by a government entity.

"I think VMRC could, and we, as the commission could say, we still think it deserves a thorough review, even if not required," Everett said. "I think this sends a message to the private citizens and individuals that government says, 'Do as I say, but not as I do.'"

Several environmental groups have taken issue with the fact that this project doesn't require a permit.

The Chesapeake Bay Foundation, Wetlands Watch and the Environmental Defense Fund wrote a letter of protest on Monday to the VMRC. Everett is the Hampton Roads Director of the CBF.

"Fort Monroe has long been recognized as one of the national landmarks most threatened by climate change and the resulting impacts," the letter read. "Electing to circumvent a process designed to evaluate the proposed use for viability in the face of sea level rise is wholly inappropriate and undermines the Commonwealth’s commitments to resilience."

Randy Pack, a principal of Pack Brothers, told the commission the project wouldn't impact the wetlands.

"The proposed site for this project does have vegetated wetlands," Ford told WHRO. "And because they've decided to forego the permitting process we are completely in the dark as to what that protection would be for these wetlands."

Ford said treating the marina development as a government project is a misreading of the law.

"The exemptions were written very narrowly to allow for things like road construction or necessary sewage pipes," he said. "These kinds of things that are in the overwhelming public good that you sometimes just need to get done. It was certainly not for this type of project. And that's the point we're making to the commission is you need to follow the rules and permitting procedures that you've laid out for private citizens and other for-profit businesses in this instance."

In addition, Mary-Carson Stiff, policy director of Wetlands Watch, told the commission the project would put the state out of compliance with certain federal regulations.

"If the state is found out of compliance with the National Flood Insurance Program, every flood insurance policy owner in Virginia could lose their coverage and the ability to receive FEMA support during a storm event," Still said.

She told WHRO this was an extreme possibility.

"It's very rare that that the state wouldn't kind of do what it needs to do to ensure they're in compliance," she said. "And so most states end up remedying whatever kind of whatever compliance issue might be outstanding."

Pack said he understood the hotel itself wouldn't be able to get flood insurance, because Pack Brothers has other properties built over the water.

"We're also building this to a flood level that meets today's standards," he added. "I believe our floor is 14 feet above flood." He added Hurricane Isabel produced a storm surge of a little more than 8 feet.

Fort Monroe Authority approved Pack Brothers 40-year lease on the property earlier this year. The deal was one of several changes in the area, which started in 2005 when the U.S. Department of Defense's Base Realignment and Closure Commission recommended closing military bases across the country.

Fort Monroe closed in 2011. More than 3,000 jobs left the base and hundreds of buildings became empty. Throughout this period, the state operated the marina, losing more than a million dollars in heating costs alone.

Glenn Oder of the Fort Monroe Authority spoke in favor of the project. He spoke about the expenses the state had incurred.

"We are in the constant state of trying to catch up and repair roofs and sump pumps and so forth," he said. "This has been an incredible challenge for the Commonwealth of Virginia. And now what we're doing is we're reaching into the adaptive reuse community and asking for private investment, private developers to come in and take care of things like a marina."

According to Pack, the company will complete the project in about four years.

NOTE: Jay Ford is on the Board of Directors of WHRO.