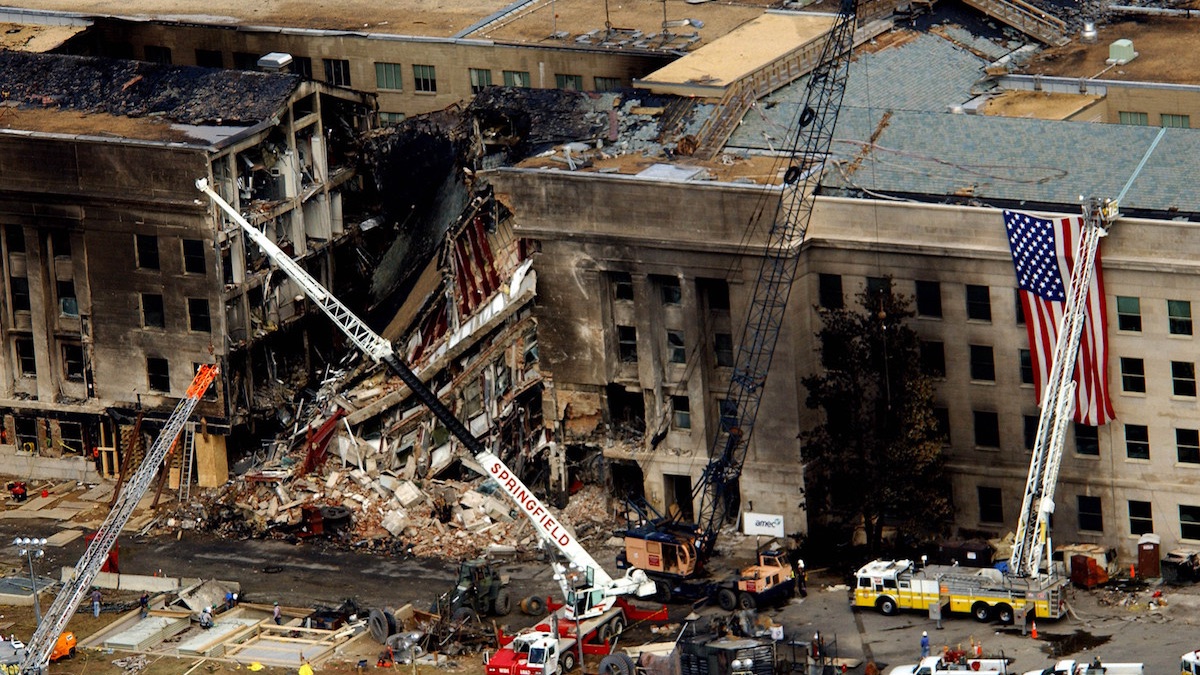 Photo by Air Force Tech. Sgt. Cedric H. Rudisill. An Aerial view of the destruction at the Pentagon caused by the 9/11 attacks.

Two Virginia Beach Classmates And How 9/11 Changed Their Lives

She was a former Defense Intelligence Agency analyst with extensive knowledge and experience in Afghanistan. Officials wanted her take on a recent killing of a prominent leader there, Ahmad Shah Massoud. Sirrs studied him for more than a decade and admired his commitment to his people.

“He was independent. He was an Afghan first and foremost,” she said.

Greg Grzybowksi was almost at the Pentagon as well -- an Army officer, he was scheduled for a meeting that was canceled.

Both are 1988 graduates of First Colonial High School in Virginia Beach. Both of their careers shifted after the terrorist attacks on the U.S. in 2001.

Grzybowski would serve overseas in the Iraq war. Sirrs would eventually become a lawyer focused on what she saw as a new foreign threat: Russian support of extremist groups in the U.S.

Everyone in Hampton Roads has their own 9/11 story: Where they were when it happened, the neighbor or family member who deployed afterward or maybe a new personal calling.

These are just two stories of the many in our community from the last 20 years.

Grzybowski knew he wanted to enter the military since he was young. He attended James Madison University, went through four years of Reserve Officer Training Corps and graduated as a Second Lieutenant in the Army just as Desert Storm ended in the early 1990s.

“My training really was still focused on the Cold War,” he said. “So I was a military intelligence officer and most of my job was learning how to fight the Soviet Union.”

Sirrs left First Colonial for Georgetown University. She was already deeply interested in Afghanistan. During the Soviet occupation of the country in the 1980s, she studied the people there who were fighting against the occupation. After college, she joined the Defense Intelligence Agency.

In 1997, Sirrs took a tour of Taliban-held territory with a former Afghan fighter.

Authorities there were alerted to the presence of an American and Sirrs had to cut her trip short -- managing to rush back across the border into Pakistan just before dawn. She wore a burqa and traveled with a group of locals to avoid being captured.

“I might have been okay if I had been caught,” she said. “But certainly the Afghans who were with me… I think it would have been worse for them. So we were in a hurry.”

In 1998, she went back to Afghanistan to meet Northern Alliance commanders. Sirrs said she notified her supervisor of her trip, but her presence in Afghanistan caused a bureaucratic fight involving the State Department, C.I.A. and D.I.A.

Sirrs was stripped of her security clearance and given an extensive polygraph by the F.B.I. to determine if she’d committed espionage. The F.B.I. dropped this investigation, and Sirrs resigned.

She continued to study the country for private think tanks and went back, interviewing people on the ground.

It’s why her former colleagues at the D.I.A. wanted to talk to her about the situation in the country the morning of Sept. 11, 2001.

“I wanted revenge. Simple as that.”

Instead of a morning meeting at the Pentagon, Greg Grzybowski drove to his posting at an office of the National Security Agency.

Stern was talking about events at the World Trade Center. Grzybowski didn’t know what to make of it, until he reached his office and saw TVs filled with footage of the flames.

“All that was on my mind at the time was revenge,” he said. “I wanted revenge. Simple as that.”

His wife and baby daughter flew to Minnesota the day before, putting into perspective the victims of the attacks.

After 9/11, Grzybowski did a tour of Iraq during what was called Operation New Dawn -- where the U.S focused on assisting Iraqi security forces.

He worked for the Army Acquisition Corps, helping acquire and maintain equipment there. Saying goodbye to his family was particularly hard, he said.

“When you have to say goodbye to your kids and your wife for a year and go off to war and not know if you're going to come back… it's pretty brutal,” he said. “So that's the part where I have a great love and appreciation for my brothers and sisters in the military. Because it's a tough thing to go through. It's a lot to give up. That's the price of freedom. But it's not like a thing to thump your chest about. It's real loss.”

Grzybowski retired in 2015 and ran for public office. For years -- even while in Iraq working to help a foreign military defend its nation -- he’d been thinking deeply about what kinds of changes he’d make in the U.S. if he had the power. He even self-published a book about the subject

In 2016 Grzybowski ran as a Republican for the state senate in Georgia, where he was living. He supported school choice, increased infrastructure spending and promised he’d fight to defend the Second Amendment.

Grzybowksi lost the primary in 2016. He now works in the private sector.

"I Did Not Think It Would Fall That Quickly"

After 9/11, Julie Sirrs went to law school, moved to Montana and joined a law firm there.

During the 2016 election Sirrs began researching online harassment by neo-Nazis -- particularly the incident where the publisher of a racist website, the Daily Stormer, encouraged his followers to produce a “troll storm,” inundating a Jewish woman with hundreds of threats and vulgar anti-Semitic messages.

Sirrs started exploring possible links between the Russian government and the Daily Stormer to see if she could build a legal case against Russia on behalf of victims of harassment.

She continues to work on developing a case against foreign supporters of extremist groups in the U.S.

In late August Sirrs, along with the rest of the world, watched the news of the fall of Kabul.

“I was shocked by it,” she said. “Even having been involved in Afghanistan for so many years… I did not think it would fall that quickly. And (it) sounds like I had a lot of company.”