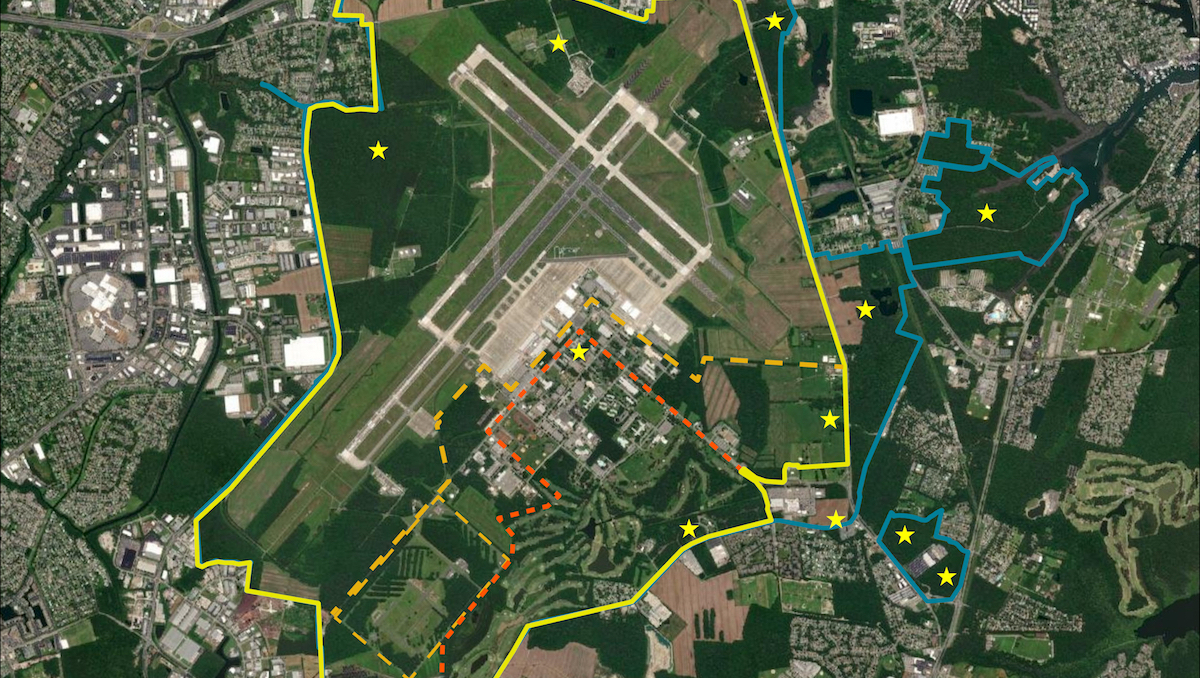 Photo by U.S. Navy. Naval Air Station Oceana with parcels, marked by stars, that could be leased by private businesses under the new plan.

Up to 400 acres of land at Naval Air Station Oceana could go onto the market for businesses to lease as part of a large project to reconfigure parts of the base and privatize some functions.

The project, Future Base Design, has been in the works for three years.

According to a Virginia Beach spokesperson, the land involved is about three to four times as large as the total amount of undeveloped usable property currently available in the city.

These companies could provide funds Oceana would then use for maintenance.

Hewitt said what made the plan attractive is vendors would compensate Oceana with in-kind payments to go directly toward the facility's expenses. A company might provide funds for road maintenance, for example, in place of paying rent.

If a vendor paid Oceana directly with a traditional lease, a large portion of that money would have to go to the federal government.

"Oceana's 78 years old this year," Hewitt said. "The airfield, the tarmac, the support equipment around the airfield is top notch... but we're starting to see some of our age in the hangars. And so if I even got a modicum amount of return on the investment in our land to apply towards my hangars, that could really help me out a lot."

According to a consultant report by commissioned by the Navy, the amount of deferred maintenance at the facility could be as high as $100 million.

Hewitt said his actual maintenance budget is just over half of what he actually needs.

The base housing is particularly underfunded. About 60% of Oceana's barracks were shut down because of mold, water intrusion or other reasons, he said.

The Future Base Design project could bring in $2.5 to $3 million more to Oceana, effectively increasing the maintenance budget by a third.

The project could also result in a new deal between the Navy and Dominion Energy. The company has been in talks with Navy officials to use a parcel at the base for its Coastal Virginia Offshore Wind (CVOW) project.

Hewitt said a deal with Dominion would be the "first win on the board.".

"We are not ready to put ink to paper," he said, "but we're in pretty advanced planning with them. And I'd be surprised if we didn't see some type of agreement between us and Dominion in the coming weeks."