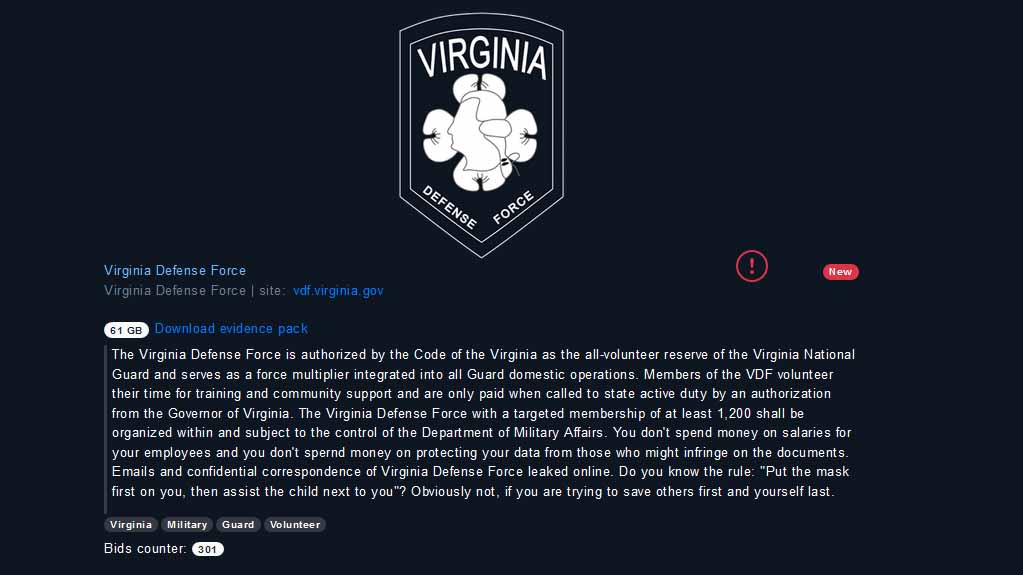 Emails from the Virginia Defense Force were for sale on the dark web as late as Wednesday.

Want to buy some state secrets?

Anyone with some money and an internet connection could buy a trove of internal information from the Virginia National Guard’s reserve force today.

The Virginia Defense Force is a group of 1,000 volunteers who support the Virginia National Guard when it mobilizes, helping with things like communications and logistics.

A listing on one dark web marketplace - a kind of back-alley eBay specializing in the sale of leaked and hacked information - boasted 61 gigabytes of “emails and confidential correspondence” from the VDF.

A freely available set of 142 emails, known as a “proof pack,” accompanies the listing so that potential buyers can get an idea of what’s for sale.

WHRO viewed the emails included in that proof pack.

They include correspondence between members of the VDF, including officials like Chief of Staff Col. DJ Thornley and 1st Regiment Commander Col. Mike Lawson.

They were mostly mundane discussions about scheduling and promotions. Some were just strings of jokes about bureaucrats.

But there was also material related to operations, training and discipline.

One included a request from the state for VDF to develop a communication system to manage the COVID-19 vaccine rollout in January.

One thread discussed disciplining someone for violations of a social media policy.

The Virginia National Guard said it was made aware of the breach on Monday and is still working with state and federal cybersecurity and law enforcement.

An initial investigation found that it was an email hosted through a third party that was accessed, not any of the Guard’s own servers or internal systems.