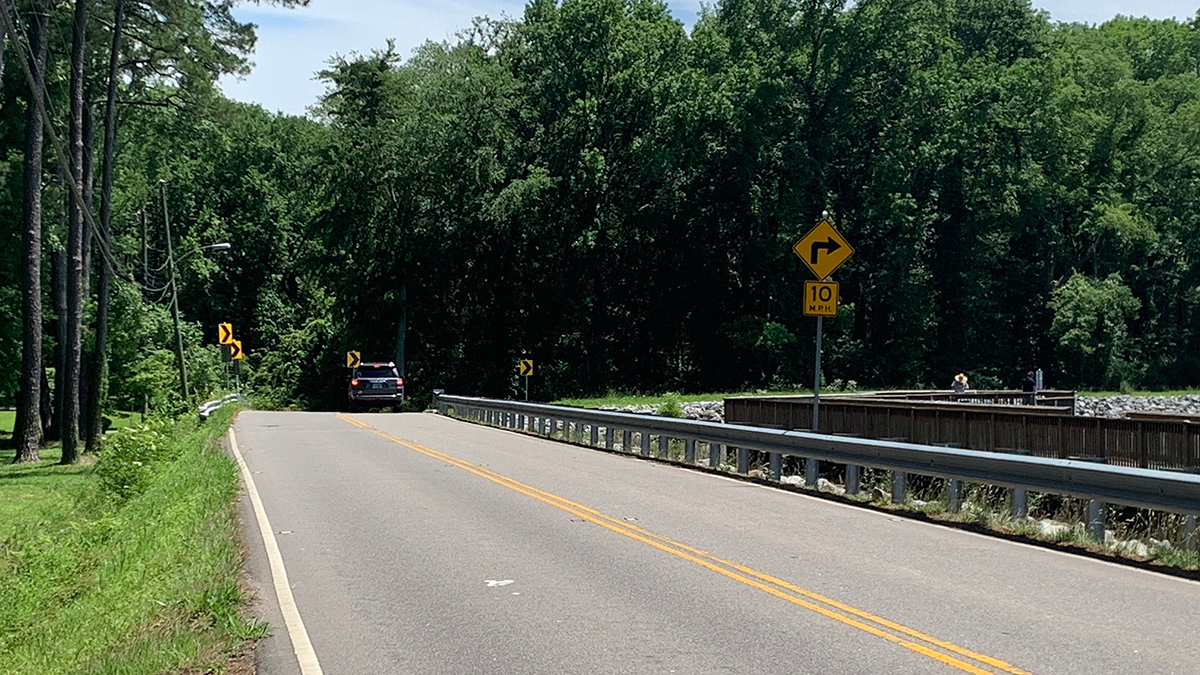 Hundreds Of Accidents Happen On Elbow Road. Are Ghosts To Blame?

Drive down Elbow Road at night, and you’ll probably understand why Virginia Beach and Chesapeake have big plans to redesign the mostly rural thoroughfare connecting the cities.

Dozens of accidents occur on the curvy, narrow road every year. Its two lanes back up during rush hour as the residential areas around it continue to expand.

“When it was first established maybe a century ago, it was originally a rural road for farmers,” said Annette Hare, a senior project manager with Virginia Beach’s public works engineering division.

Another aspect of the five-mile road’s background is more questionable — it’s the subject of an urban legend around Virginia Beach and Chesapeake.

One internet post calls Elbow “Virginia’s most haunted street.” Others talk about the “restless spirit of Mrs. Woble,” who once lived on the road before she went missing and was presumed dead.

The reports say her spirit now walks the road and caution people against driving it at night because the sight of her could cause an accident.

In Search Of Mrs. Woble

I don’t know if I believe in ghosts. I definitely have never seen one.

But I tried to have an open mind during a recent late-night search for Mrs. Woble and any other spirits. I even pulled over alongside the road and stepped out of my car for a few minutes — another no-no according to the online posts.

I saw nothing unusual, although the darkness and thickets around the street created an eerie vibe.

During another trip down the road, I stopped and met several local residents who were familiar with the legend of Elbow Road.

“I believe there’s a higher being and there could be very well [ghosts],” said Lee Sawyer, noting that he’s never witnessed any spirits on the road. “I would like to...it’d be neat, as long as it’s a friendly ghost.”

Sawyer and neighbors suspect the legend started in response to all of the wrecks on Elbow Road — there were 300 from 2012 to 2019, according to the cities of Virginia Beach and Chesapeake. Some accidents have been fatal and led to wrongful death lawsuits, although officials say there haven’t been any deaths in recent years.

Virginia Beach currently includes Elbow in its 10% of roads with the highest historic likelihood of an accident.

A lot of them happen near Sawyer’s home. He recalled one driver running straight into a guardrail and another “real bad one” when an SUV and pick-up truck collided head on.

Sawyer and Robert Yarborough, another neighbor on the road, don’t believe ghosts caused the accidents.

“I used to get drunk and drive down it man at 70 myself. It was thrilling. But it’s a shame that people hurt themselves,” he added.

Combine those high speeds with several tight curves and steep ditches and forest alongside the street, and there’s little room for error. Signs on the road instruct drivers to slow down to 10 miles per hour to make it around one elbow-like curve.

“It requires your attention, quite a bit of attention to drive it,” said Jim Long, who works on transportation projects for the city of Chesapeake.

Plans For An “Urban-Style Roadway”

Elbow has been a concern for Virginia Beach and Chesapeake for more than a decade as traffic on it continues to increase. Chesapeake officials said 9,000 vehicles traveled the road each day in 2019, up from 7,100 in 2011.

The cities have made minor improvements over the years, such as adding more street lights and smoothing out some of the curves. However, they’ve struggled to secure funding for any major redesign projects — until now.

Hare, the Virginia Beach project manager, said next year the city will launch a $30 million project to straighten the road through forest land and install a bridge over wetlands. Virginia Beach will address the environmental impact by investing in wetlands elsewhere.

Chesapeake also plans to widen its portion of Elbow Road and create a median between both lanes.

The new parts of the road could encroach onto people’s property — in which case the cities would have to pay them. Neighbors say they’re fine with that if it means fewer accidents.

Both cities hope to finish their respective projects by 2026. They could ultimately add two more lanes to the road.

“We are catching up on building an urban-style roadway,” Hare said. “It will be a much safer, geometric driver experience.”

As for the local folklore, Hare doesn’t discount the possibility that spirits roam about Elbow Road. She believes they’ll welcome the new plans.

“My hope as a woman of faith,” she said, is “this project will bring about the release of their spirits to the heavens.”