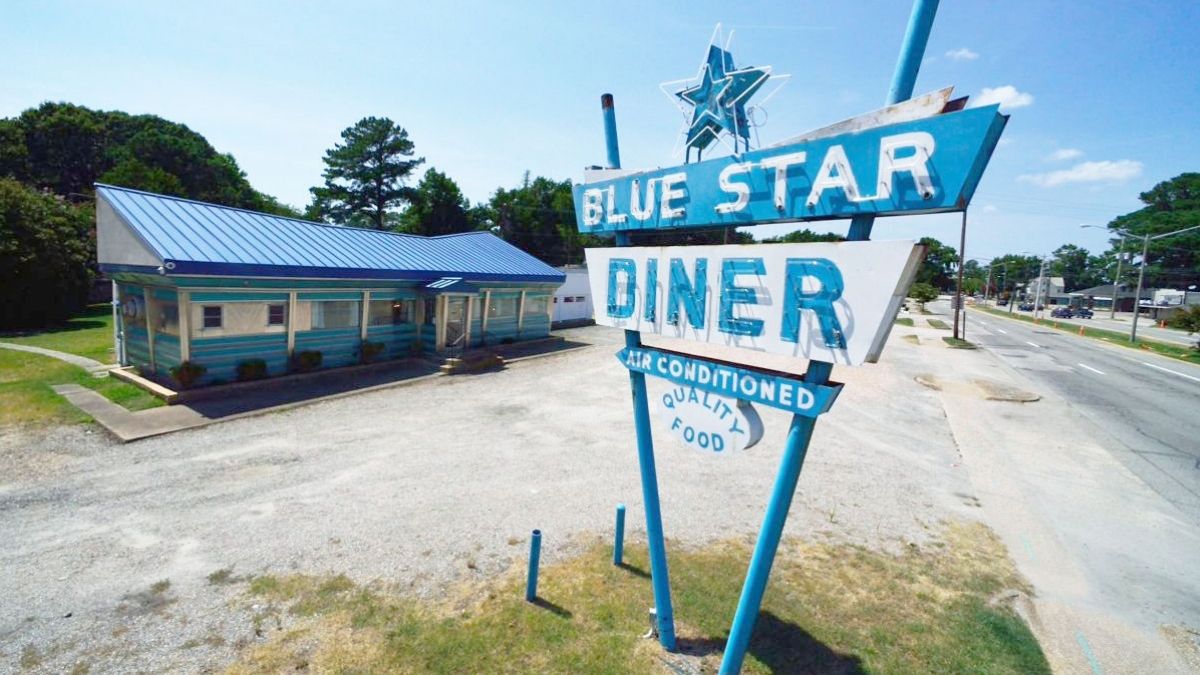 Photo courtesy of Michael Lessin/Belleville Diners. The Blue Star Diner was built in 1957 in New Jersey by the Manno Dining Car Company before being transported to Newport News in 1961.

“We’d Be Very Sad To See It Demolished”: Owner Of Historic Diner Hopes Someone Else Can Carry On The Legacy

Since the early 2000s, he's saved many Virginia, Maryland and New Jersey diners from being demolished by developers and fast-food chains or gas stations.

He moved several of them to a private piece of land, though he won't say where for fear of scrappers finding them.

"The buildings are literally shrink-wrapped, like you would shrink-wrap a large boat," Lessin said.

That's not what he plans to do with the Blue Star Diner, located on Warwick Boulevard in Newport News.

"Blue Star is in a great location in a great community," he said. "So I believe it should stay where it is and be re-opened."

Lessin said the Blue Star is one of only five truly authentic diners left in Virginia.

He said others may have diner menus, but the real ones are prefabricated - typically in a New Jersey or Massachusets factory - and delivered by truck to various locations starting in the 1920s and up to the early '60s.

The Blue Star was built in 1957 in New Jersey by the Manno Dining Car Company, and originally opened in Woodstock, Va.

It was transported to its current location in Newport News in 1961 and was owned and operated by Fotini "Fannie" Blentson until she died in 2009.

It was also featured in the 1988 film "Zelly and Me" starring Isabella Rossellini and David Lynch.

Lessin bought the diner in 2010 with the goal of renovating and re-opening it. He said he completed about 80% of the work before the pandemic shut things down.

Now he's looking for a new owner to take over and carry on the diner's legacy.

"We'd be very sad to see it demolished and a gas station go in there," Lessin said. "But we're hoping that they'll have some passion for the history of the place and the potential it has as a community diner."

His passion for diners started in the early 2000s. He's always been a foodie and likes the type of diner that serves home-cooked meals a mom or grandmother would make.

He also loves the unique environment diners create where people aren't afraid to talk to each other.

"When you're sitting in a diner, there just this comraderie that seems to happen among patrons," Lessin said. "I mean it's almost awkward if you don't talk to the person next to you."

Lessin owns a house in nearby Hilton Village, but primarily lives in the Washington D.C. area where he runs a technology company. Ultimately, the distance factored into his decision to sell the diner.

He said the challenge for the Blue Star - and many older diners - is the original owners picked prime locations that are now desirable to developers. In many cases, the land is worth more than the building itself.

He's hoping the price - which factors in the value of the brand - will deter most developers from buying it. It's listed at $1.2 million.

Lessin sees a lot of potential for the Blue Star to reopen because of its proximity to Hilton Village and the Newport News Shipyard.

"Blue Star is on a busy road with 27,000 cars that drive past it every single weekday," he said. "So that's a lot of opportunity for takeout orders."

Plus, there's the friendly diner environment which he thinks is more important now than ever.

"I think it certainly exists," he said. "And I hope in a post-pandemic world that we get back to where you can sit at a diner stool and talk to the the stranger next to you about the news of the day or how your personal day is going."