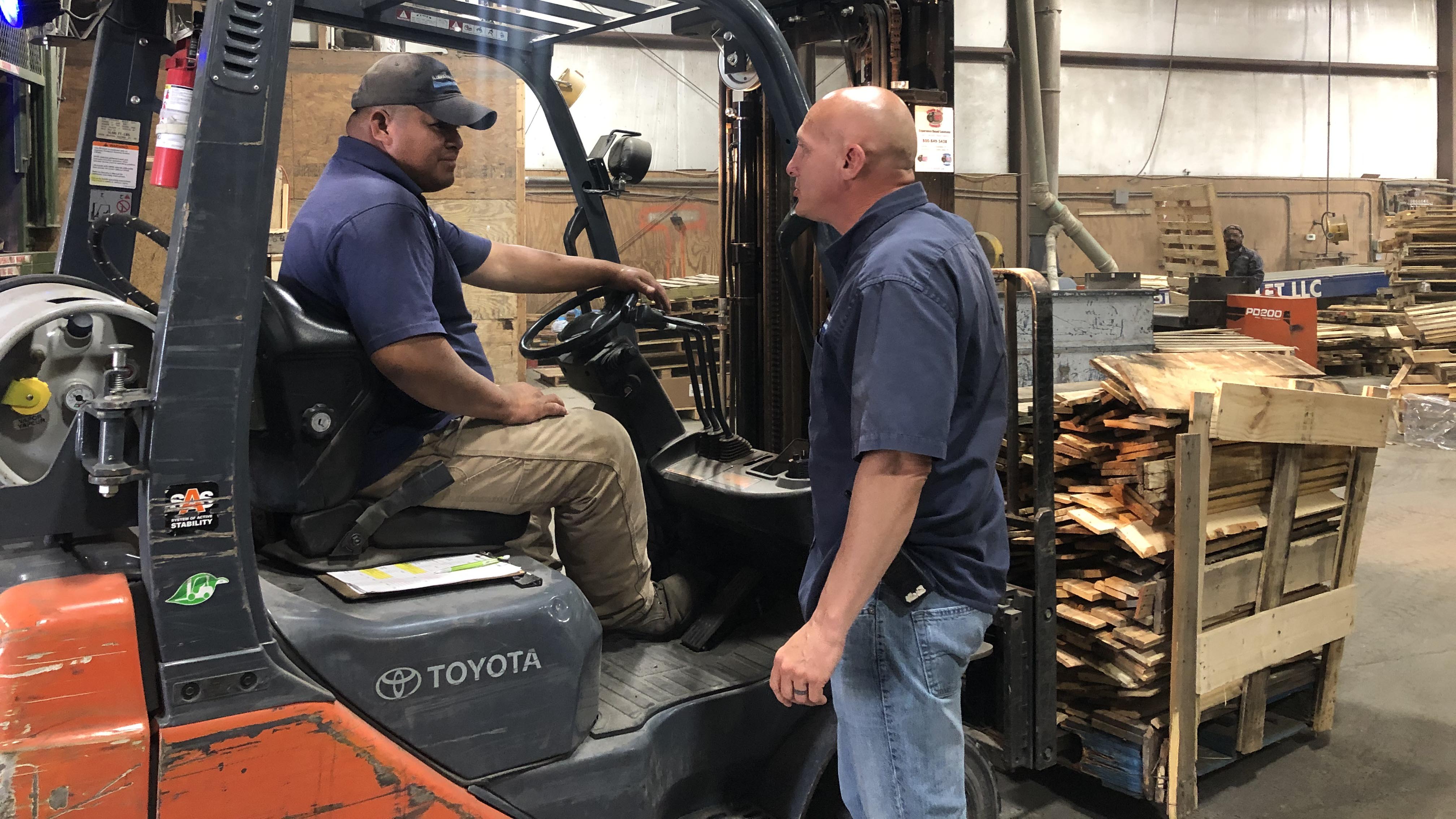 Photo by Christine Kueter. Karl Millsap and an employee at Blue Ridge Pallets in Lyndhurst.

First it was toilet paper, then yeast, garden gnomes and gas.

Now, as society reopens, it’s pallets that are in short supply, a behind-the-scenes commodity used to transport goods from factories and farms to distributors, retailers, and us.

Wooden pallets are an essential part of shipping, and a way to contain and protect products as they’re moved from place to place by forklift and truck. A mainstay behind stores, on loading docks and in dumpsters, the humble pallet is lately commanding more respect.

“Our system is designed to run on pallets. I think pallets are a good gauge of what the economy’s doing,” said Karl Millsap, founder and owner of Blue Ridge Pallets, a Shenandoah Valley company that repairs and resells 48 by 40-inch wooden pallets. “A warehouse or manufacturer, say, if they don’t have pallets, they have to shut down until they can get them. We play an important part. It’s probably underrated until people run out of pallets, but that’s when they realize how bad they need them. We’re definitely a big part of the supply chain.”

As the economy reopens, pallets are in short supply.

Nervous manufacturers and retailers have hoarded them in warehouses, lumber costs have exploded and there are too few truckers to haul them.

“If I was a Target or a Walmart, I wouldn’t want to lose any customers due to not having a product in my stores,” Millsaps said. “We do it here, everybody does it to a certain point, I think, even at home; people carry a little more toilet paper and cleaning supplies now than what we did a year ago, so it’s a natural occurrence.”

“If the planes can’t fly their usual routes, the following day, there are planes that have to be moved to where they need to begin their scheduled route,” she said. “It’s not a simple process; a lot of algorithms are involved. It’s also not cheap.”

Some industries are particularly vulnerable in a pallet shortage because their products are perishable, like fruits, vegetables and plants.

Hoopes expects delays and price increases “because alternative ways of transporting the goods have to be found.”

Big pallet rental companies like CHEP have apologized and advised their customers to find back-up supplies. But even small businesses that use only dozens of pallets may need shift their sourcing.

The Wenger family has grown Concord and Niagara grapes on their Waynesboro farm since 1938.

“We primarily use pallets during our harvest season in September,” said grower Mark Hochstedler. “We sent them out with flats of packaged grapes to go the grocery store; we also use them on the farm to stack logs of picked grapes to transport from the vineyard to the cooler.”

He usually waits only a few weeks before harvest to source the 40 to 80 pallets they’ll need but will likely scout them earlier this year.

“I haven’t started checking on pallets, but maybe I should,” he said.

“One thing for sure is, nobody realizes the value of a pallet until a customer runs out of them,” he said. “Before, I would have to make sales calls, and I haven’t made any real sales calls in the last six months.”

Hoopes expects the problem to ease as the economy reopens.

Millsap expects pallets to remain a hot commodity through the end of 2021.