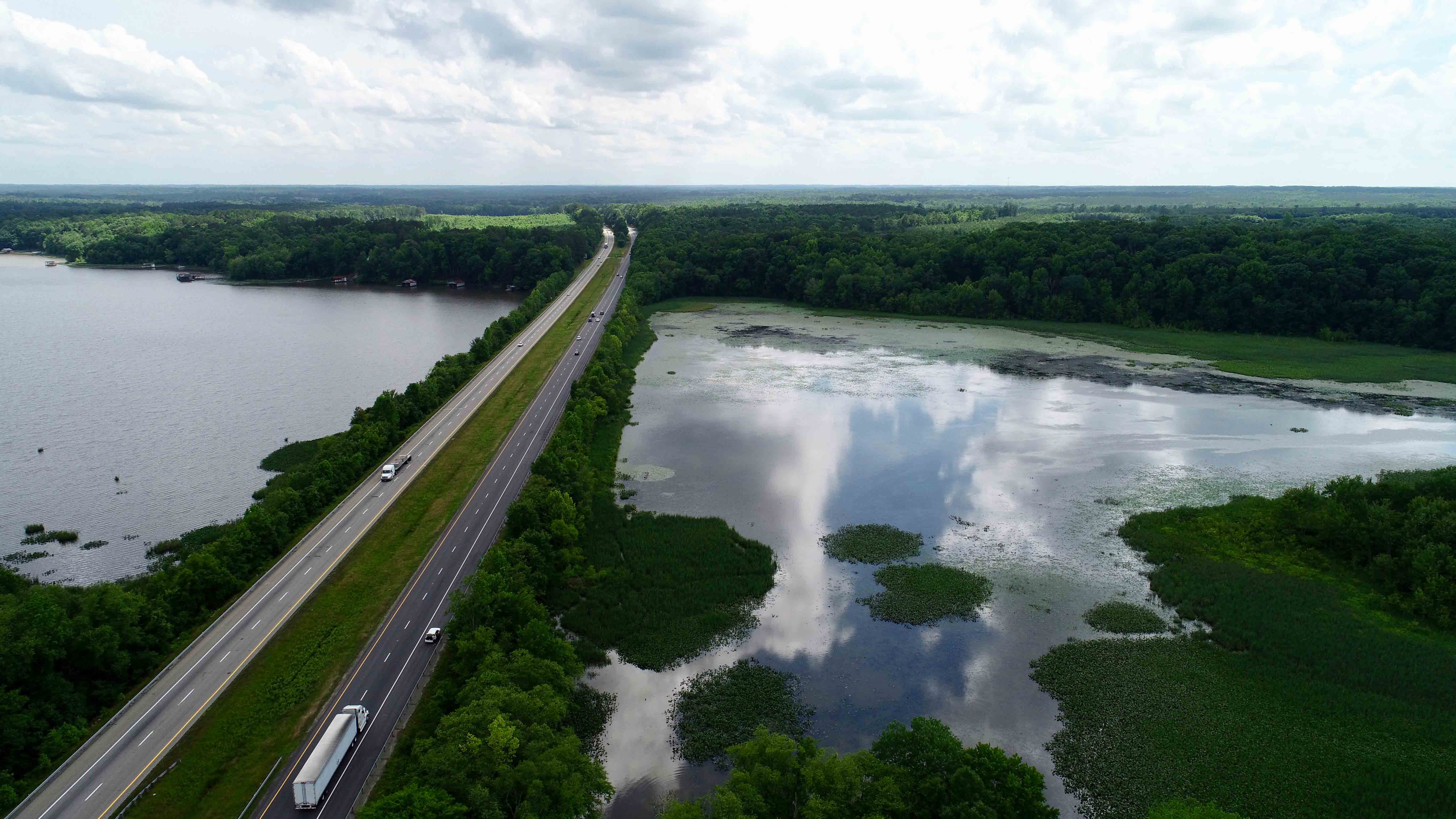 Photo by Lewis Directed Films via Shutterstock. It took Virginia Beach decades of planning and construction before the Lake Gaston pipeline was fully operational.

Tapping Gaston: How Virginia Beach Found Its Own Water Source

In 1980, Virginia Beach was transforming from a sleepy suburb to the largest city in the state.

For years, it was buying surplus water from neighboring Norfolk, but it quickly outgrew what Norfolk could offer.

Some residents, like former city councilmember Nancy Parker, reused water for a variety of daily tasks.

“People were, including me, standing there in the shower with a bucket right underneath us , or to take the gray water out of the washing machine on your rinse cycle to be able to flush toilets,” she said.

For much of the Tidewater region, the water that supplies morning showers or a cup of coffee starts in a small tributary of Lake Gaston.

Water travels 76 miles through a pipe into a series of reservoirs for Virginia Beach’s use.

It wasn’t always that simple. It took more than a decade of legal and logistical challenges for the city to secure a water source for its residents and ensure its continued growth.

The Lake Gaston pipeline went into service in 1998, several decades after Virginia Beach realized it could run out of water.

Timing Showers And Other Ways To Conserve Water

Before Virginia Beach connected to the lake, residents had to get creative to stay within set water usage limits.

Repeated droughts plus continued growth and development in the city was straining the water supply the city was getting from Norfolk.

The city had been put on notice: It needed to conserve and cut back on its water demand.

Margaret Felts grew up in the city. In the early 1980s, her father fashioned a custom switch for their shower to limit the amount of water they used.

“You would get wet, hit that toggle switch, lather up the hair, lather up the body, then turn the switch back on so you didn’t have to waste water trying to get it warm or cold and all that again,” she said.

Residents faced hefty fines on their utility bills if they didn’t stay under the city threshold.

“I was in the band and we hosted college girls that were teaching the color guard,” she said. “These girls took these incredibly long showers and Mom and Dad were so nervous about the water bill coming in and having to talk to the girls about shortening their showers.”

Water was a concern for Virginia Beach and the region as early as 1970. Droughts that hit the area took a toll on aquifers and demand exceeded Norfolk's surplus supply.

Tom Leahy, who was with Virginia Beach's department of public utilities at the time, said those droughts exposed the water crisis.

“What became obvious is really around the 1975-76 drought, Norfolk's water system wasn't going to handle the city's growth because the 75 drought was really kind of a minor drought at the time,” he said. “And yet the Norfolk system was struggling.”

And as more droughts rolled in over the years, the issue only got worse.

“The 80-81 drought certainly got everybody realizing -- we were rationing water to 75% our normal usage and Norfolk was telling us that it might have to go to 50%,” Leahy said.

Parker, who served on city council from 1986 to 2002, said the city needed to do something.

“We had reached a pretty critical point about what was going to be our water supply for Virginia Beach, not only today, but definitely in the future,” she said.

As families adjusted to water restrictions, Virginia Beach was facing the harsh reality that its growth could be its downfall.

It wouldn’t have been the first city in that situation -- -- places in California face similar difficulties.

“People had to leave the state because it’s too expensive,” said author Michael Zitron. “The Californian people are paying for water inflation because they don’t have enough water for their people or production.”

Zitron studies the economics of water and argues it is key to everything that makes a community, including the military and agriculture, in Virginia Beach’s case.

“Water impacts the home and the families more than people realize just in the terms of too little and too much,” he said.

With Norfolk's sources drying up in the early 1980s, Virginia Beach’s ability to secure clean water seemed like a pipedream.

It would be 15 years before that dream became reality.