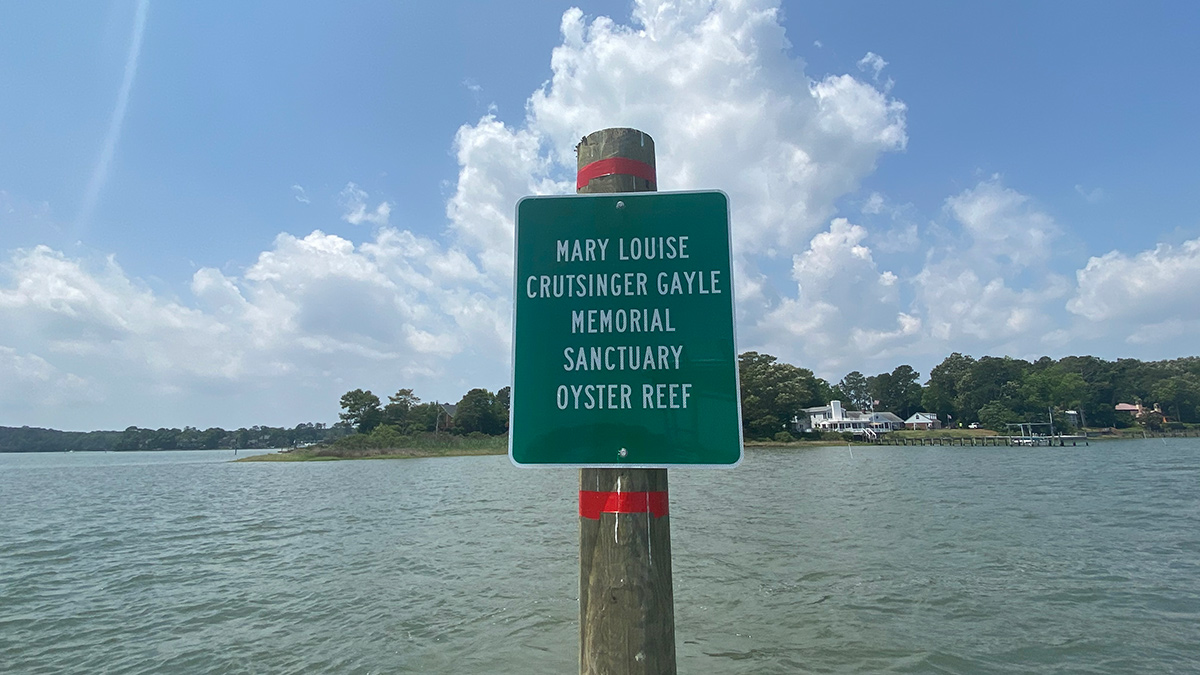 Photo by Sam Turken, WHRO. Mary Louise Gayle, one of the victims of the Virginia Beach mass shooting, helped preserve space in the Lynnhaven River for oyster reefs.

Virginia Beach Shooting Victim Loved The Lynnhaven River. Now Her Name Is Part Of It.

Mary Louise Gayle cared a lot about the Lynnhaven River. It was her backyard growing up with her four siblings.

“We had a piece of land on the river,” her brother, Bobby Crutsinger, said. “We fished it. We waterskied. We did just about everything you could do.”

Gayle cared about restoring the waterway after decades of pollution.

As a Virginia Beach city employee, she helped preserve space in the river for new oyster reefs. She knew the oysters improve water quality by together filtering millions of gallons of water a day.

That’s why it was fitting when about 50 family members and friends recently boarded boats to see a new acre-wide oyster reef in the Lynnhaven named after her.

The visit helped mark the two-year anniversary of the Virginia Beach mass shooting on May 31, 2019 that killed Gayle and 11 others.

Amid a difficult annual period of grief, Gayle’s family members said the boat trip helped “outshine the darkness” and focus on her passions.

“There’s a reason it’s sunny today guys,” said Gayle’s daughter, Sarah Gayle Leonard, who came down from Fredericksburg with her two kids for the event.

“The weather report said that it was calling for rain, but it is sunny right now. I think that she would be very very happy, extremely honored.”

After a 20-minute boat ride, the family and friends made it to the spot where millions of oyster shells are beneath the water’s surface, covering the river floor.

“That’s really cool. Do you see it?” she asked her children. “That’s Grammy’s name right there. How cool is that? I just want to hug that sign.”

The trip ended with everyone saying a prayer and dumping buckets of more oyster shells onto the reef.

“To the seven seas! We love you Lou!” people yelled as they emptied out the buckets.

The Virginia Beach-based non-profit Lynnhaven River Now collected the shells from local restaurants. Workers with the organization then created the reef by using water cannons to blow the shells off a barge into the river.

Soon, oyster preservationists will dump baby oysters onto the reef. They'll reproduce and, like a coral reef, create habitat for other sea life.

“It makes me feel good that a good person is honored in this way,” said Brent James, who coordinates oyster projects for Lynnhaven River Now. “She is now permanently memorialized.”

James thought of the idea to dedicate the reef to Gayle in part because she spent two years helping him preserve one part of the river for oysters.

That included navigating a lot of Virginia Beach bureaucracy — for example, coordinating with the city’s public works and coastal engineering offices.

“I don’t tolerate bureaucracy or inefficiency very well,” James said. “Mary Lou kind of held my hand and walked me through all that process….she always did what she said she was going to do, which I greatly appreciated.”

Right after James finally acquired the rights to the space, a former city employee went into Building 2 at the Virginia Beach Municipal Center and fatally shot 12 people.

James found out that Gayle was one of the victims from the newspaper.

“My jaw just dropped and I could not believe it,” he said. “It just took the wind right out of my sails. I just had to just stop. And it takes a long time to recover when you lose a friend and someone you’ve worked with like that.”

Eventually, James was ready to build a new oyster reef.

He knew exactly how to honor Mary Lou, the longtime friend of the Lynnhaven River.