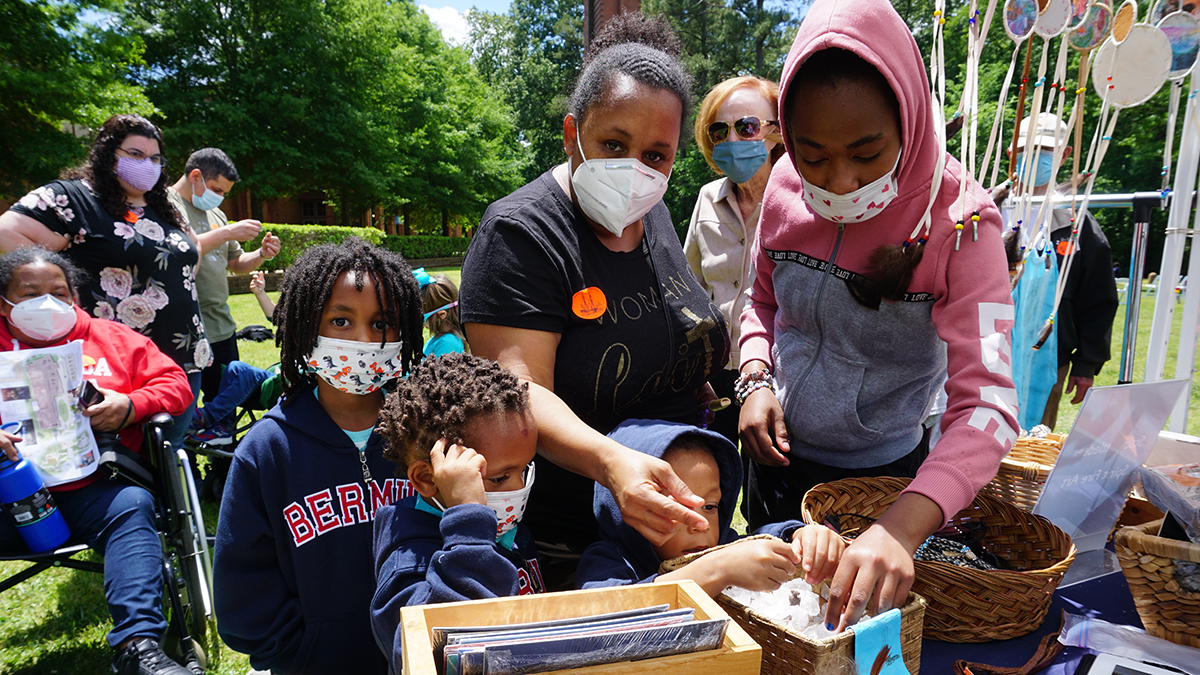 JAMESTOWN Throughout Jamestown’s Indigenous Arts Day, the year of COVID was on everyone’s mind.

“(It’s) our first gathering in probably over a year for a lot of us, so we’re a little out of shape," said Troy Adkins, a member of the Chickahominy Tribe. "I know I speak for myself, I know I am. Somebody chuckled behind me, I didn’t like that."

Since March last year, the Virginia Department of Health reported 960 reported cases of COVID-19 among people who identified as American Indian or Alaska Native. Of those, 27 people died.

VDH said it has no specific data on tribal association.

For tribal members, the Indigenous Arts Day was a day of celebration, not only for Indigenous culture and arts but for stepping back into the community.

Adkins and other members of the Hampton Roads-based Red Crooked Sky American Indian Dance Troupe demonstrated traditional and modern dances. At times the public was asked to join in.

Small crowds of masked onlookers visited artist booths and sat in physically distanced groups of chairs throughout the day.

Jamie Helmick, who manages special projects and programs for Jamestown Settlement, said people were excited to get out again.

“I think this was a good opportunity for them to come out and get together again, because community is very important among Native cultures,” Helmick said.

There were four different performers and nine artists demonstrating and selling their work including wampum jewelry, baskets, flutes, pottery and gourds.

At Stacey Littledeer’s table, the Knight family took turns digging through a box of homemade arrowheads to find just the right one.

Littledeer is a painter and sells other Indigenous artwork like the arrowheads and wooden flutes. By day, Littledeer, who comes from the Mattaponi and Eastern Cherokee Tribes, is a data analyst and has been working from home since last March.

“Looking at lines and lines of data and then after I get off work, I grab the paints and I sit at my kitchen table and it brings me peace in a very hectic world,” she said. “I’ve done a lot more of it now since COVID happened.”

Littledeer’s spirit paintings feature animals and trees. Her “Women in Prayer” series speaks to women who have struggled at home during the pandemic.

“Many of my pieces you see one woman -- a woman alone. Being alone does not have to mean that you are lonely.”

Nikki Bass dances with Red Crooked Sky. Her community, the Nansemond Tribe, is discussing whether they will have their powwow this year.

“We did a survey to ask the community how people feel about outdoor events, about types of PPE and maybe having things like staggered attendance times to control the number of people on the grounds. So we’ll see how it evolves but we’re hoping to at least have something, maybe similar to this so people can feel a sense of connection again.”

Some tribes will post schedules on their websites for their powwows and other events open to the public as decisions are made.