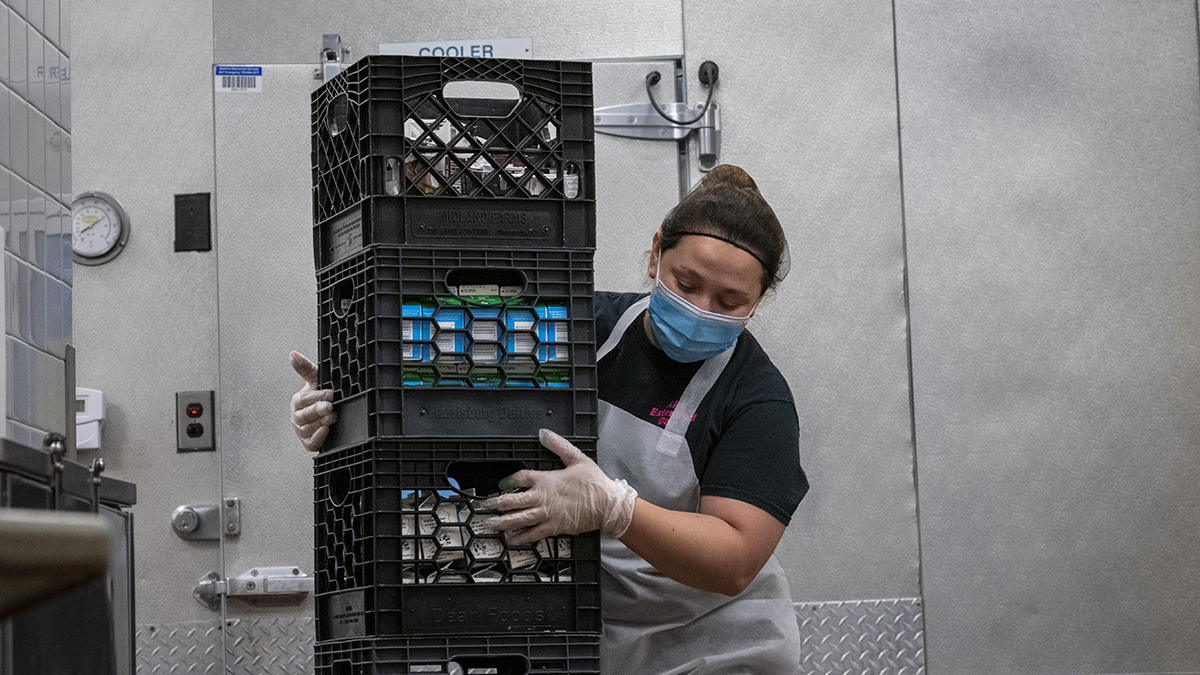 Photo by Tim Witham, USDA. Grocery workers, home health aides and other jobs that required workers continue interacting with people during the pandemic, don't have an easy process if they contract the virus at work and have to take time off.

Each work day at Dulles International Airport, customer service agent Tadese Boru faced hundreds of travelers, many stepping in close to show their boarding pass one last time before departure.

Months into the pandemic, passengers still wore their masks with varying degrees of attention – snug and tight, wedged under the nose, forgotten below the chin, dangling from an ear.

“They tell you mind your own business when you ask them to put back their masks,” said Boru, a 65-year-old Ethiopian immigrant. “It comes like a downpour, a lot of passengers. You know that something is going to happen.”

As a “ramp ambassador” who sees to gate-checked bags and the travelers needing assistance, Boru is often the last airport worker a passenger sees before boarding and the first they meet on arrival. He makes $12.75 an hour, without benefits or sick leave.

On November 5, it happened. Boru collapsed in his sweat-soaked uniform at the end of a 10-hour shift.

Boru lost a month of work and wages to Covid-19. He’s certain where he became infected.

“I got it there, Dulles International Airport, without any doubt,” he said. “I come, do my work, go home. It’s like a machine. I’m a cog.”

Gov. Ralph Northam last month signed two bills into law that will make it easier for some frontline workers who become sick with the coronavirus to collect workers’ compensation benefits. The new laws create a presumption that medical personnel, law enforcement officers and firefighters sickened with Covid-19 acquired the disease at work, making them more likely to be covered for lost wages and health care costs.

“I think we are forgotten,” said Boru. “We are on the same front line” as police and nurses, he added. “Anybody who is on the front can get the bullet.”

The Question Of Cost

The debate over which workers receive favorable status for Covid-19 insurance claims has been marked by questions of cost.

Last August, in an example of the potential price tag, the Commission on Local Government estimated an earlier presumption bill covering first responders, medical personnel and school board employees would cost the city of Alexandria an additional $5.5 million in workers’ compensation awards. That measure ultimately failed in the state Senate.

When lawmakers tried again this year, Senate majority leader Dick Saslaw (D-Falls Church) initially made the bill benefitting police and firefighters retroactive only to September 2020, five months into the pandemic, to reduce overall costs. Northam amended the bill, making it retroactive to July 2020, before signing it into law. Health care workers can make claims dating to March 2020.

As for those essential workers excluded from the new Covid-19 workers’ comp measures, “I have every ounce of respect for those who put themselves on the line during this pandemic, and I would like to see everybody get that presumption,” said Del. Jay Jones (D-Norfolk), chief sponsor of the law supporting police and firefighters. Jones is also running for the Democratic nomination for Attorney General.

“We unfortunately are working under the faulty assumptions from local governments and insurance companies about what that would cost," he said.

The Challenge Of Tracking Workplace Infections

The scale of job-related Covid-19 infections is unknown.

“The number of workplace cases that you see is highly, highly, highly underreported,” said Rajesh Balkrishnan, an epidemiologist at the University of Virginia School of Medicine. “There’s no incentive or mechanism to ensure full reporting.”

Some 10,242 Virginians had died of Covid-19 by March 30, out of 617,941 cases. In that same time frame, the state Department of Labor and Industry issued a total of 41 citations that involved violations of the state’s Covid-19 workplace safety standards, spokeswoman Jennifer Rose said. Four involved Covid-19 death investigations.

“There’s a major gap – from the public health authorities, and the companies, and the state – in keeping track of these numbers,” said Jonathan Williams, a spokesman for Local 400 of the United Food and Commercial Workers International Union.

Experts say it’s nearly impossible during a pandemic to establish who got sick where.

“As an epidemiologist I’m confident saying they’re underreported,” Lisa M. Lee, associate vice president for research and innovation at Virginia Tech, said of workplace infections. “But by how much is harder to say.”

Outbreaks in different work settings are recorded by a patchwork of industries and agencies.

The federal Centers for Medicaid and Medicare Services closely tracks infections among nursing home residents and staff. Some union officials say the most reliable tally of Covid-19 cases among food and farm workers is by the nonprofit Food and Environment Reporting Network.

"We are not asking for anything we don't deserve"

Workers’ compensation is geared to injuries and illnesses that are clearly job-related – like severed limbs or black lung.

During the pandemic, the onus is on an employee to show they became infected at work -- a difficult burden given how widespread the virus is in the community.

As of April 1, the Virginia Workers’ Compensation Commission had received more than 14,500 Covid-19 claims, including 30 death claims. Of those, awards were granted in 391 cases, and 4,070 claims were denied. The rest were pending.

"It's a difficult burden for most people who have Covid to establish where they got it," commission chairman Ferrell Newman said.

The Virginia presumption bills would flip the burden, forcing employers to show evidence that sick medical workers, firefighters, and law enforcement officers were not infected on the job, sparing many the time-consuming process of filing claims and fighting for injury payments.

At least 28 states and the District of Columbia are considering Covid-19 presumptions. Like Virginia, most only benefit medical and emergency personnel.

“Workers are putting their lives on the line to provide us with food and other necessities,” said Marcy Goldstein-Gelb, co-executive director of National Coalition on Occupational Safety and Health. “They deserve compensation. They deserve burial benefits if they die.”

In the first weeks of the pandemic, Samira Brooks, a home health aide earning $9.25 an hour, was busy shopping for necessities like toilet paper and food that her clients on the Eastern Shore needed in the lockdown’s panicked early days.

One store she visited was soon closed after two workers contracted Covid-19. Brooks suspects that’s where she caught the virus. She lost more than a month of work, and fell behind on mortgage and car payments.

That Brooks and other home aides aren’t covered by Virginia’s presumption bills shouldn’t be a surprise. Home health aides are excluded from workers’ compensation even under normal circumstances.

“We are not asking for anything we don’t deserve,” said Brooks, who is recording secretary for Local 512 of the Service Employees Industrial Union.

A separate law signed by Northam in March will, for the first time, grant five days of annual paid sick leave to 30,000 Medicaid home health aides. Experts say paid sick days are essential to stop the virus among low-wage workers.

Months after recovering, Tadese Boru still shudders at his Covid-19 ordeal. “I thought I would not survive,” he said.

“It is the same story. A man who helps nine people becomes the tenth.”