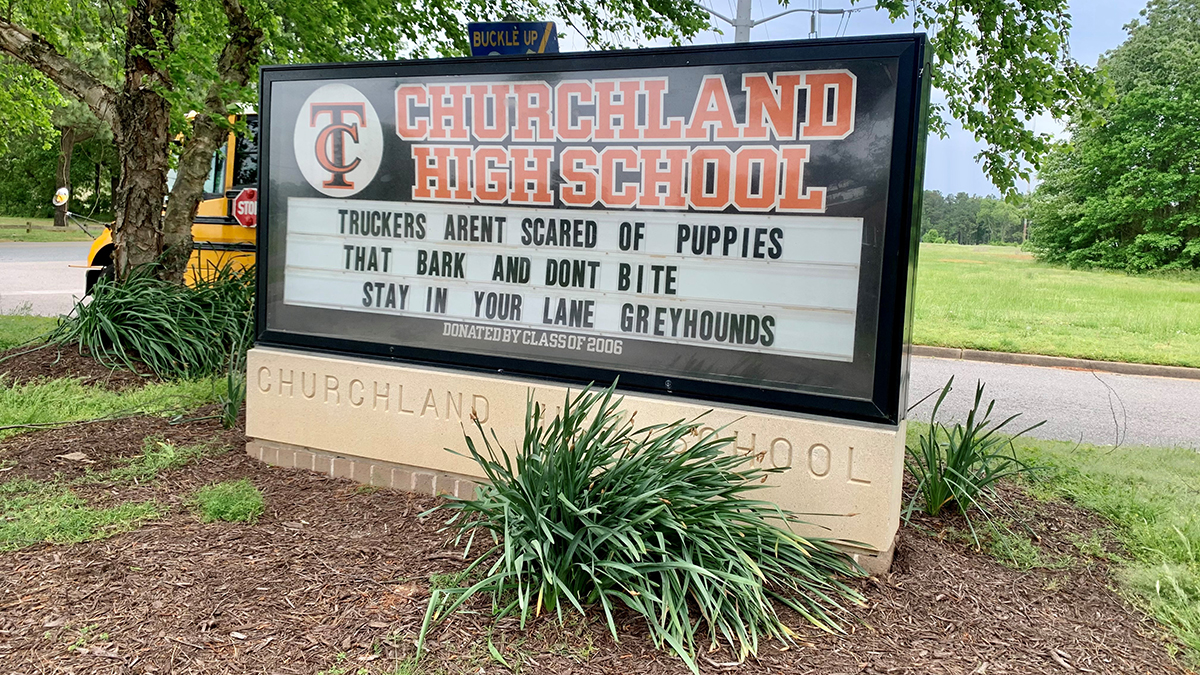 Photo by Mechelle Hankerson. Churchland High School in Portsmouth started a marquee war with other schools after a year of not seeing each other in person.

Limited By The Pandemic, Portsmouth Schools Take Rivalries To Their Marquees

The marquees at Portsmouth schools have gotten a little more bold lately, trading competitive messages back and forth.

Friendly, in-person school rivalries are one of the things that were lost to the pandemic.

Churchland High School’s principal Shawn Millaci wanted to find a way to recapture that and the connection it creates in each school building and across the city.

He borrowed the idea from stores in Christiansburg, Va., where local businesses went viral for swapping cheeky messages on their exterior signs.

“I kind of just thought to myself, hey, we all have marquees here in our district,” Millaci said. “It'll be just a good way to engage with one another and really just something that's going to be all in good fun.”

And the signs are bringing all those people together even if they can’t be in the same building.

“Education is more than just academics and the pandemic really kind of brought that to light,” he said. “It's about connecting with our students in our community.”

At first, the ideas for the sign came from just a handful of school leaders.

But as Millaci and others posted the signs to social media, students - and some parents- got involved and offered their own ideas.

Some were friendly, but Churchland came out swinging at their two rivals, I.C. Norcom and Wilson (soon to be renamed Manor) high schools.

Anyone hear from Norcom or That School With No Name?? All we hear is crickets. 👀 #RIPDMX pic.twitter.com/wotav2sruP

After Churchland took a few unanswered shots at Norcom, there was finally a response: “CHS can’t truck with us,” Norcom’s sign read. “Everybody knows who the big dogs are! One. & Done.”

At the beginning of this week, Churchland responded.

“Truckers aren't scared of puppies that bark and don't bite. Stay in your lane, Greyhounds,” referring to themselves and Norcom High by their mascots.

Over the last few weeks, Churchland’s called Wilson High “The School With No Name.”
The school’s name will officially change to Manor High this summer.

Middle and elementary schools are involved too. There’s no requirement the signs are as sassy and merciless as the high school signs have been.

This week, Superintendent Elie Bracy debuted his own sign.

It says: “You want to run your wars, but you know who really runs this show.”

A note of transparency: Portsmouth schools are a member of the Hampton Roads Educational Telecommunications Association, which holds WHRO’s license.