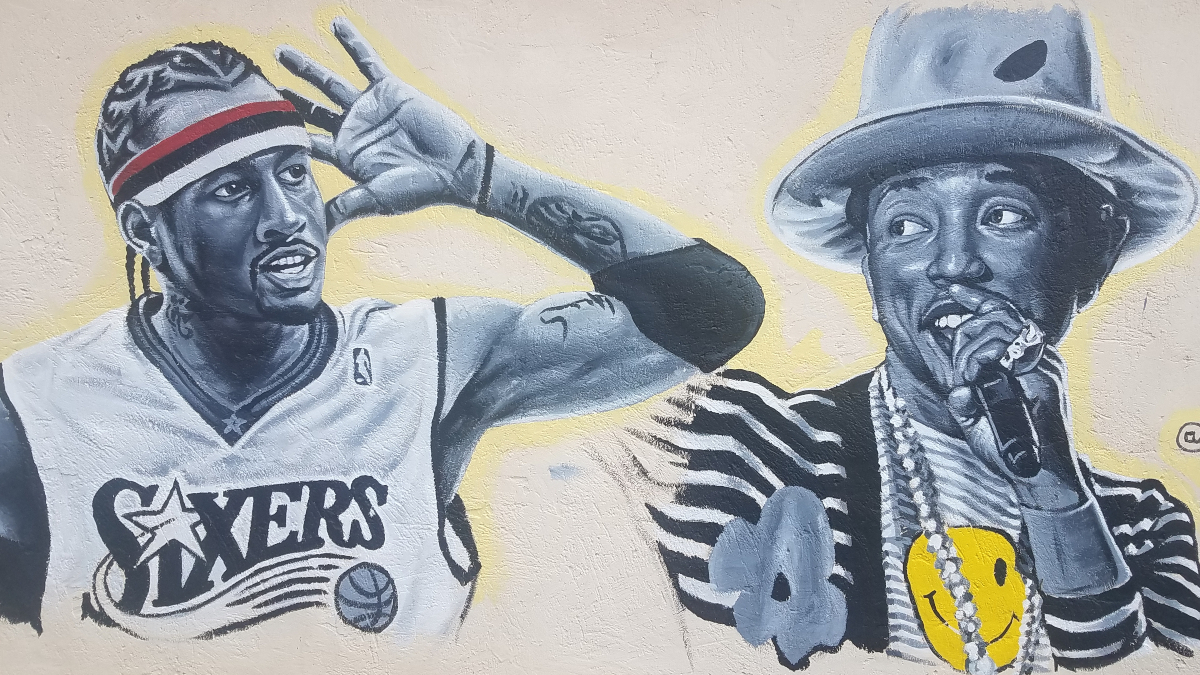 Photo by Gina Gambony. Allen Iverson and Pharrell Williams on the side of "Colleywood Cuts" on Colley Avenue. Art by Brodrick Antoine.

Listen to this story here!

In regular times, living in the Ghent area of Norfolk provides an endless supply of entertainment—just looking out my window, I used to be able to see people bustling along Colley Avenue at any time of the day or night.

Not so much over the past year.

But a few weeks ago, I noticed some unusual activity at a barbershop, Colleywood Cuts, that’s in my view.

What’s the connection between these well-known figures? They are all from Hampton Roads.

The portraits are extremely realistic, and quite beautiful. They are mostly greyscale, with pops of color here and there—like gold on the medal Gabby Douglas wears; red on Iverson’s headband; and on Pharrell’s t-shirt, a bright yellow smiley face.

Antoine specializes in portraits (you can see his work here), but he usually uses graphite pencil. He has experience in ceramics, woodwork and acrylic painting as well. This is his first time using outdoor paint.

Antoine’s wife, Nikki Antoine, and his 5-year-old son, Sydney, accompany him whenever he’s working on the mural at Colleywood Cuts. He works both day and night, examining the work in sunlight and under the powerful fluorescent light in the parking lot.

He focuses on small details at night under the fluorescent glow—it’s stronger than sunlight “and a lot quieter,” he said.

Nikki is not just there for company. She’s also a helpful critic of the work. Her favorite portrait in this collection is Missy Elliot.

“I like the fact that it looks brushed, it looks airbrushed,” she said. “I also like the details in the helmet on David.”

Antoine says Nikki has the final decision regarding when a piece of art is complete.

A few days after meeting Brodrick, my curiosity gave me the courage to venture into Colleywood Cuts.

It was the first time I’ve ever stepped foot in a barbershop, which I consider an alien man-space. It was not scary at all, and I spoke with the owner, Antonio Morales, or Tonii. He commissioned this work for the building.

Morales says he loves art, especially modern art and the “street vibe.” When he opened the shop two years ago, the first picture he put on the wall was of Steve Jobs. They have something in common.

“We both started in a garage,” Morales said. “When I was 14, my dad built me a little one-man station in the garage. And that's exactly where I started cutting hair.”

You can see the new landmark mural at 1210 Colley Avenue, between Maury Avenue & Princess Anne Road.

You can also receive services from Tony or one of his barbers. Morales said they do any style haircuts, designs, eyebrows, hot lather, hot towel shaves.

They also do that waxing thing of nostrils and ears that men do -- something I learned about during my first venture into a barbershop.