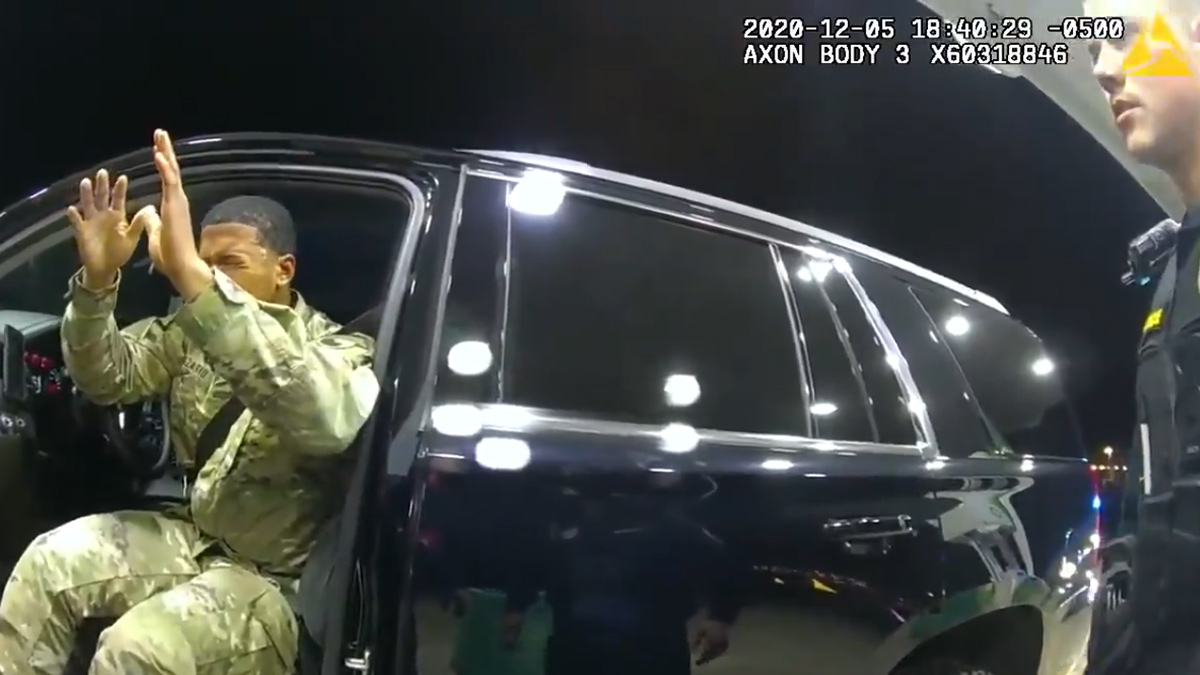 In a video made public as part of lawsuit proceedings, uniformed Army officer Caron Nazario was pepper-sprayed and kicked by a Windsor police officer in December.

Gov. Ralph Northam is directing Virginia State Police to investigate the events in a viral video of Windsor police officers drawing guns and pepper spraying an Army medic, who is Black and Latino, during a traffic stop.

Northam made the announcement Sunday, only hours before the town of Windsor announced one of the officers, Joe Gutierrez, had been fired as the result an internal investigation into the Dec. 5, 2020 incident.

Town officials said the probe “began immediately,” and determined the officers did not follow policy. The police department took unspecified disciplinary action and implemented new training for the entire department, according to a statement from the town.

“Since that time, Officer Gutierrez was also terminated from his employment,” the statement said. It’s unclear exactly when he was fired.

Video of the encounter sparked widespread outrage after it became public as part of the lawsuit. It's only the latest piece of footage to spark a local, and national, conversation about police use of force.

“This lawsuit … for as much as it is about a particular case, it is also about a conversation about an ongoing national policing concern,” Andrew Bodoh, an associate attorney at the firm representing Nazario.

The Isle of Wight chapter of the NAACP said it would launch an investigation into the incident.

“Please know this will not go unaddressed,” the branch said in a statement. “We are done dying. We will not stand silently while another African American’s civil rights are violated.”

Northam called the incident “disturbing,” as he directed the state police to investigate.

“Our Commonwealth has done important work on police reform, but we must keep working to ensure that Virginians are safe during interactions with police, the enforcement of laws is fair and equitable, and people are held accountable,” the governor said.

Nazario was driving a new SUV home from an Army drill weekend when Windsor police pulled him over because they believed he did not have a rear license plate. The lawsuit says Nazario did have temporary plates taped to the inside of the back window. In the video, the officers exited their car with guns drawn and shouted at Nazario to exit his vehicle.

“I’m honestly afraid to get out," Nazario said at one point.

"Yeah, you should be!" one of the officers responded.

Body camera footage shows police pepper spraying Nazario and striking him once he exits the car.

According to the lawsuit, the officers also threatened to end Nazario’s military career if he spoke out. Police allegedly promised not to press charges if he would “chill and let this go.”

Nazario's attorney, Jonathan Arthur, said he welcomes the State Police investigation. In a statement he said Gutierrez's firing was "appropriate," but added that, "we must consider steps to decertify officers that engage in this behavior, so that they cannot seek employment with other law enforcement agencies.”

Arthur's statement also said departments must evaluate "the failure of officers like Daniel Crocker to promptly intervene to end an unjust police-civilian encounter."

Local and state leaders echoed calls for an outside investigation of the incident. But several state lawmakers said the Virginia State Police would not be truly independent.

Del. Mike Mullin, who represents parts of the Peninsula, said the incident must be “quickly and thoroughly investigated by an independent 3rd party. Not a local prosecutor or police department. An independent group capable of prosecution violations of civil and human rights.”

“Police should not be investigating police,” Richmond Del. Jeff Bourne wrote on Twitter.

Last year, Virginia legislators passed a law that empowers the AG to investigate “pattern or practice” violations of constitutional rights by local law enforcement but not specific cases.

Attorney General Mark Herring called the officers’ behavior unacceptable and said the video “doesn’t show anything to justify how Lt. Nazario was treated.” But he told WAVY News it was too soon to determine whether his office would conduct its own investigation.

“We’re going to be looking to find out whether there was a pattern of conduct like this, either within the department or these officers,” he said. “We need to get a lot of information. This is a time for the [Windsor police] department to be as open and transparent as possible.”

A similar debate arose less than three weeks ago after a Virginia Beach police officer shot and killed Donovon Lynch, a 25-year-old Black man. The Virginia State Police are leading an investigation but some said this was not sufficient. City council member Aaron Rouse said it also demonstrated why Virginia Beach should have an independent citizens review board.

Nazario’s lawsuit is also reigniting debate over qualified immunity, the legal doctrine that can shield law enforcement from liability in civil suits.

Virginia’s Legislative Black Caucus called the video “appalling” and said it proves that “not even a military uniform and brave service to this country can shield Black and Brown Virginians from racist police harassment and brutality.”

The lawmakers pointed to legislation from Del. Bourne that would have ended qualified immunity but failed during the two most recent General Assembly sessions -- even as Democrats have made police and criminal justice police a central focus.

Following the summer’s racial justice protests, Virginia lawmakers banned no knock warrants, limited the use of chokeholds, changed the state’s jury sentencing rules, abolished the death penalty and legalized marijuana. But they did not touch the issue of qualified immunity.

“[Bourne’s] bill would have held law enforcement responsible for engaging in unlawful or abusive actions by providing Virginians victimized by police brutality with an avenue for redress. The legislation also would have worked to deter and prevent future incidents. Sadly this legislation was defeated,” Black Caucus members said in a statement.

Nazario’s attorneys do not believe qualified immunity should apply in this case, arguing there are specific legal precedents for their claims. “We do believe that the law was sufficiently clear. It is sufficiently clear that their conduct violated the Constitution,” Bodoh said.

The Isle of Wight NAACP is holding a press conference Monday evening to discuss its response to Nazario’s case. The Hampton Roads chapter of Black Lives Matter is also planning a protest Tuesday.