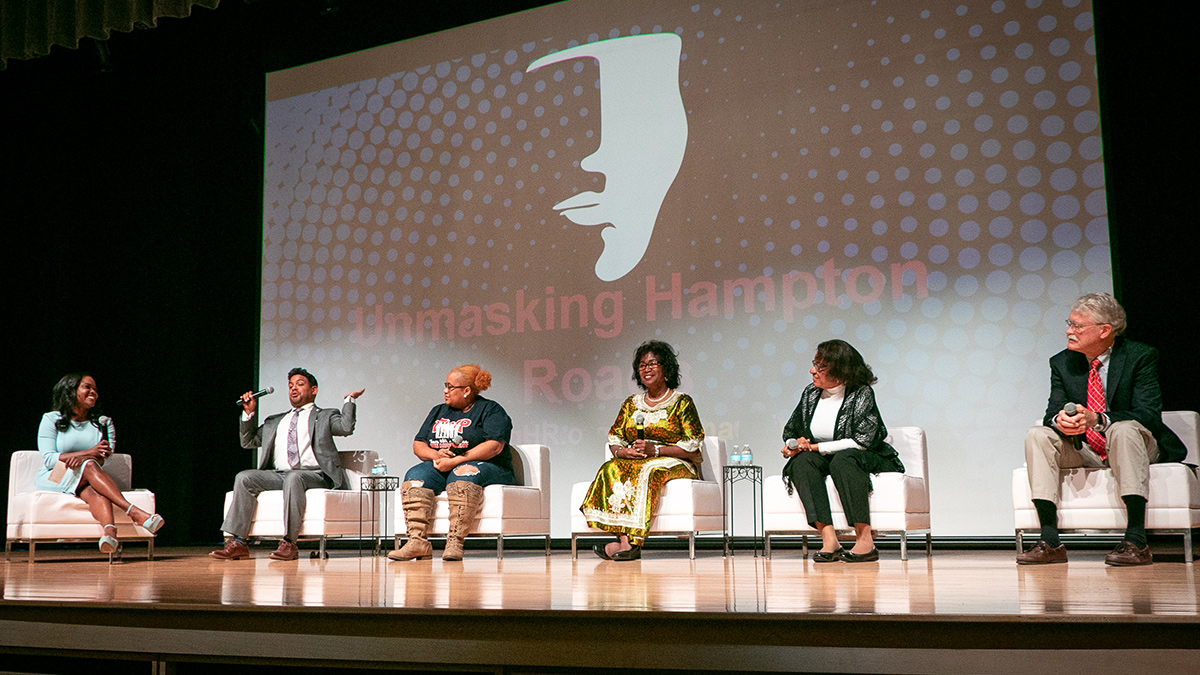 Photo courtesy of The Unmasking Series. "Unmasking Hampton Roads" in 2019 examined racism around the Southside.

The Virginia Peninsula is considered one of the birthplaces of slavery in North America.

In 1619, the ship carrying some of the first slaves to the New World landed at Point Comfort — what is now Fort Monroe in Hampton.

Today, people of color around the Peninsula contend with lingering impacts of slavery. The Unmasking Series seeks to confront that.

It’s a set of workshops that examine racism and other forms of discrimination around Virginia. It includes public conversations, film screenings and panel discussions with activists and experts on race. There have been workshops in Richmond, Charlottesville and Southside Hampton Roads.

On April 23 and 24, there will be a virtual one focusing on the Peninsula.

Journalist Samantha Willis organizes the series with other conmunity partners. She spoke with WHRV’s Sam Turken about what to expect from Unmasking the Peninsula.

Listen to their conversation and find a full transcript below. The interview has been edited for length and clarity.

Sam Turken: Samantha, thanks for coming on.

Samantha Willis: Thank you, Sam. I appreciate it.

ST: Obviously, there's been a lot of unrest over racial injustice and discrimination in the past year. What do your workshops try to unmask?

SW: So the unmasking series is really about taking off the public persona, I guess, or the mask that we don when we're talking about difficult issues like race and racism and really getting to the core of how these issues of race and racism have impacted us in the past and how they continue impacting us in the present.

ST: The next unmasking conference will cover Newport News, Hampton and other areas around the Peninsula. What are issues specific to the region that you think will come up?

SW: One issue I definitely think is going to come up will definitely be anti-Asian hate and violence. The amount of that that's rising is just really scary. And that community is really suffering right now. Really thankful for the partnership of the Filipino American National Historical Society, the Hampton Roads chapter. We're going to have Dr. Allan Bergano, who's the co-founder of that group, to come and talk with us about issues his community may be facing right now. And that's just one. We've seen police violence — issues of police violence against unarmed black and brown people. So we're going to be examining those issues as well.

ST: Some of the first slaves to the new world landed on the peninsula. So a lot of people's roots are tied to the region. How will that play into the conference?

SW: Like you say, the region has tremendous ties and tremendous history with a really painful, dark past in those regards. So we'll be examining those issues and how elements from the past continue to trickle down into our society today. One thing that we've — you know some of the feedback that we've encountered in past years with unmasking is you know oh, 'Nobody alive today was a slave. No one's — you know slavery is over. Get over it.' But that displays a failure to understand just how deeply embedded and systemic racism is embedded into every sector of this country in this nation. To say that slavery is over and not look at the effects — the ripple effects — that it continues to play out and have across the region and across the country, is a mistake.

ST: Considering that, what do you hope attendees take away from this next unmasking event?

SW: Really, we're hoping to offer some resources and tools to communities of color and how to deal with and combat trauma that they may have experienced as a result of racism or as a result of gender bias, gender discrimination, sexism, different things that we see playing out in different sectors as well. So whether we're talking about housing, fair access to affordable housing. Whether we're talking about education and making sure that our schools and educators are equipped to to teach our students in the way that will prepare them for the 21st century world that we're living in now. Whether we're talking about legislation and laws that have a disproportionate impact on Black people, brown people and communities of color, these are the types of issues that we're going to be talking about and the resulting trauma from those issues we'll be examining as well.

ST: That was journalist Samantha Willis. She produces The Unmasking Series, a set of workshops that examine racism and discrimination around Virginia. Thanks again for joining us.

SW: Thank you so much.