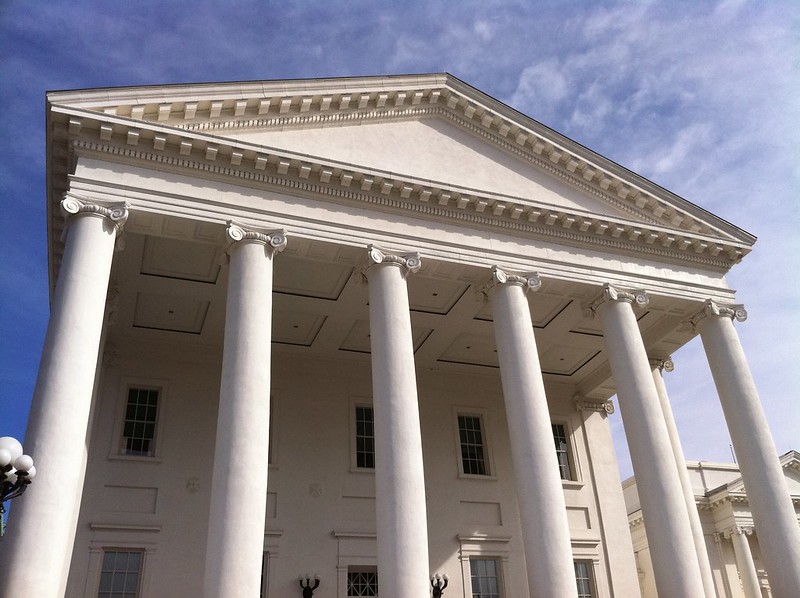 Virginia is now the 23rd state to abolish the death penalty. That brings an end to capital punishment in a state that has historically used it more than any other.

Gov. Ralph Northam signed the legislation Wednesday, during a ceremony at the Greensville Correctional Center. Before the signing, he toured the death chamber at the facility.

“It is a powerful thing to stand in the room where people have been put to death,” he said. “I know that experience will stay with me for the rest of my life, and it reinforced to me that signing this new law is the right thing to do. It is the moral thing to do.”

Eliminating the death penalty represents a historic shift in Virginia, which carried out its first execution in the Jamestown colony in 1608. The commonwealth has since executed nearly 1,400 people, more than any other state. Virginia is second only to Texas in the number of executions carried out since the U.S. Supreme Court reinstated the death penalty in 1976.

But today there are only two death row inmates in custody in Virginia, whose sentences will now be commuted to life in prison. The state has not executed a person since 2017, and a jury has not imposed the death penalty since 2011. A number of factors contributed to the decline in death sentences, according to research from the Center for Death Penalty Alternatives. In 2002, for example, Virginia created regional capital defender offices which represented defendants in capital cases.

Newport News Delegate Mike Mullin, who sponsored the House version of the bill, said Virginia lawmakers are just catching up to their constituents when it comes to the death penalty.

“Virginians don’t want to execute people any longer,” he said in an interview.

Public surveys show that, nationwide, support for the death penalty has declined. Fifty-six percent of Virginians support ending the death penalty, according to a poll from Christopher Newport University. Northam’s vocal support for abolition stands in contrast to Sen. Tim Kaine (D-Virginia): As governor, Kaine also a Democrat, presided over 11 executions despite his personal opposition to capital punishment.

Advocates for death penalty abolition point to stark racial disparities in its application. Between 1900 and 1969, Virginia executed 73 Black men for non-murder offenses of rape, attempted rape and armed robbery. The state did not excute any white people for those crimes, according to the Death Penalty Information Center.

In Virginia, the one-time capital of the Confederacy, the history of the death penalty shares a  link to the history of lynching, Rev. Dr. LaKeisha Cook, from the Virginia Interfaith Center for Public Policy, said during the signing ceremony.

“As extrajudicial lynchings became commonplace … the state responded by carrying out more state-sanctioned executions in order to placate white mobs,” she said.

Delegate Mullin has drawn on his experience as a prosecutor to inform his opposition to the death penalty.

“There is truly evil in the world …  and I have held the hands of widows and family members … so I understand the gravity of what we’re talking about here,” Mullin said.  But he pointed to the reality of wrongful convictions. In 2000, Virginia’s governor pardoned a death row inmate, Earl Washington, only nine days before his scheduled execution after DNA evidence revealed he was innocent of a 1982 murder and rape.

“I don’t know what to say to someone who was executed for a crime that they didn’t commit. And during the entire debate [in the House], we heard stories about bad people doing bad things, but none of the debate was able to answer: how do we fix it if we kill an innocent man.”

Abolishing the death penalty is one of a series of actions that Virginia’s new Democratic majorities in the House of Delegates and the Senate have advanced over the past two years.

But even last year, the measure stalled in the legislature due to opposition from some Democrats. Several lawmakers say they believe Northam’s public support for abolition and the racial justice protests that erupted last summer led to the bill’s passage.

Some Republicans accused Democrats of sympathizing with criminals in supporting the bill, but three Republicans voted in favor of the legislation. Others said they would have supported the bill if it included a sentence of life without the possibility of parole for some murder cases.

The General Assembly has passed a number of other criminal justice measures over the past year, including changes to the rules around jury trials and legalization of marijuana.