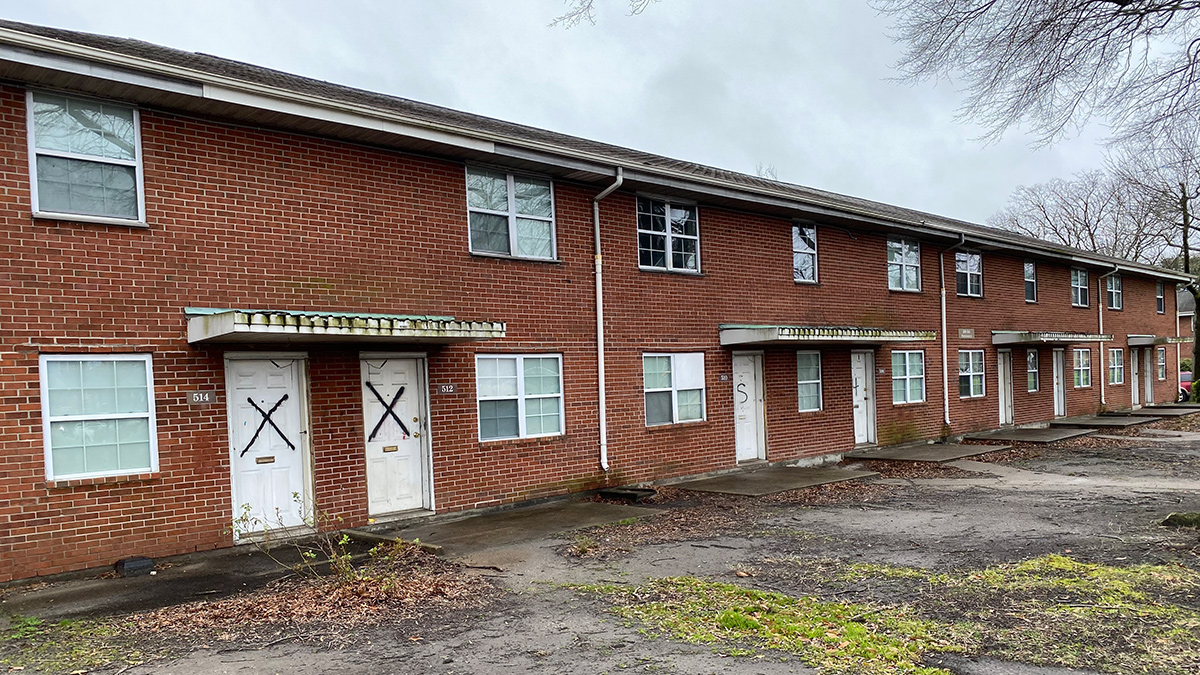 Photo by Sam Turken, WHRO. Part of the Tidewater Gardens public housing complex is vacant. The city of Norfolk plans to demolish it.

Sewage bubbling up into streets. Mold in bathrooms. Unlocked vacant apartments that are safety hazards for children.

As the city of Norfolk redevelops the Tidewater Gardens public housing complex, residents say their living conditions are worsening.

They fear the city’s housing authority is neglecting maintenance around the community amid Norfolk’s efforts to relocate families from the complex before demolishing it.

“Even though we’re moving, they should still treat it like people stay there because people do still stay there,” resident Zenobia Wilson said. “We do still pay our rent.”

The redevelopment of Tidewater Gardens is part of Norfolk’s massive overhaul of the St. Paul’s area near downtown. The city aims to demolish three aging public housing complexes over time and replace them with a mixed-income residential and commercial community.

Altogether, about 4,200 people — most of whom are Black — would have to relocate from the area. City officials have said families will be able to return to the rebuilt community. But housing advocates and many residents continue to push back, arguing the project will displace Black families and force them into other segregated neighborhoods.

Norfolk’s first focus is Tidewater Gardens’ 618 apartments. People are moving out in phases, and the city has started demolishing vacant apartments.

Residents say they have long dealt with poor living conditions around the complex. A 2020 report about the St. Paul's project noted that apartments lack proper insulation and are made of hazardous materials, including lead and asbestos. Units are dark, and their brick exterior is deteriorating. The area also floods easily, and people fear frequent gun violence.

Some units also are unlocked and easily accessible to squatters and unsupervised children who want to play inside them. One recent afternoon, the back doors of at least two units in a building on Fenchurch Street were unlocked. Shards of broken grass covered the nearby ground.

Wilson and Karina Rayeford — another resident — said the unlocked buildings pose risks to residents’ safety. They noted that one empty apartment recently filled up with smoke prompting an emergency response from Norfolk Fire-Rescue.

“You would have thought it was a full-fledged fire going on there. There was so much smoke. But somebody had went in there and turned the oven on,” Rayeford said. “What if it was the middle of the night and nobody noticed smoke coming out and the whole [building] caught on fire?”

WHRO contacted Norfolk Fire-Rescue requesting additional information about the incident. The department has not yet responded.

Residents say foul-smelling sewage also backs up into streets and people’s yards. A video taken by Monet Johnson with the housing advocacy group, New Virginia Majority, shows water bubbling up from a manhole cover in a street on a sunny day.

“It leaks down where children be playing, thinking it’s water. And the whole time it’s sewage water,” Wilson said.

Families continue to deal with other issues like poor ventilation and mold in their apartments and constant flooding. Wilson said it often takes months for workers to respond to maintenance requests.

WHRO requested comment from the Norfolk Redevelopment and Housing Authority about residents' complaints. An agency spokeswoman initially said all vacant units were locked. However, when told that WHRO found some units open Thursday morning, she walked back her statement.

She later followed up, saying that since learning of the issue, NHRA directed workers to immediately lock up any doors that were previously open. She also said the housing authority resolved problems with the Tidewater Gardens sewage system last week.

“It’s based off your class. If you’re below a certain amount of money annually, this is the neglect,” he said. “This is what you get.”

Editor’s Note: WHRO holds a contract with Barbara Hamm Lee, a spokesperson with the St. Paul’s revitalization project. Hamm Lee is not involved with editorial decisions related to coverage of the St. Paul’s neighborhood.