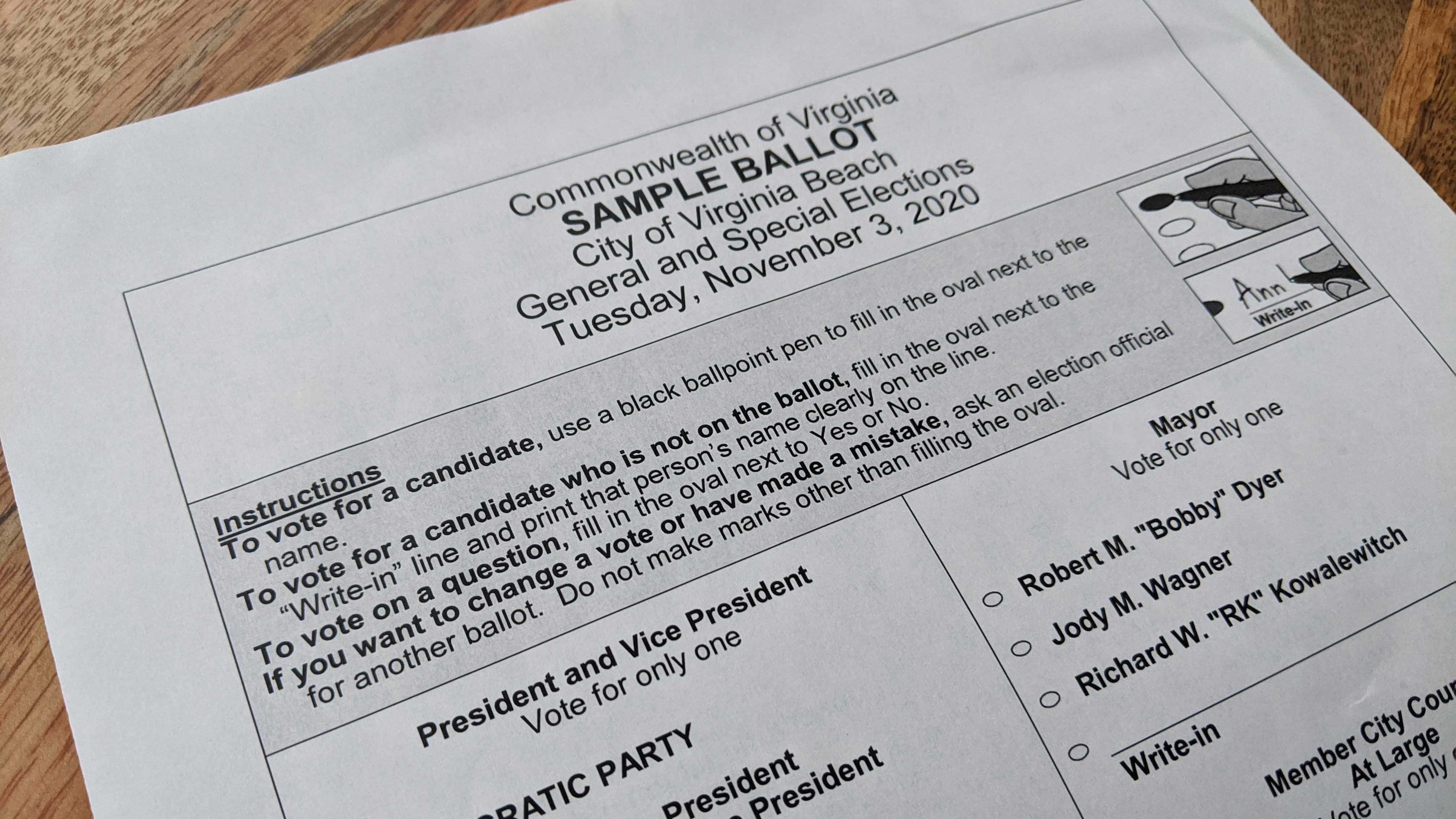 Photo taken by Rebecca Feldhaus Adams. A new law would make it so that Virginia Beach residents can only vote for city council candidates running to represent the districts they live in.

Local Elections In Virginia Beach Will Likely Change. Here’s Why.

The General Assembly passed a bill that would require localities that have district-based representation to only allow residents of those districts to vote for their representative.

It only affects a few municipalities in the state -including Poquoson and Virginia Beach- where district representatives are chosen by the whole city.

“What happens is that it dilutes the voting power of that district,” said Del. Kelly Convirs Fowler, sponsor of the bill.

That’s been a concern of Black residents in Virginia Beach, leading to a lawsuit claiming the city’s voting structure violates the federal Voting Rights Act.

Del. Convirs-Fowler said the state’s legislation does not require City Council to do anything. It just ensures that ballots in separate districts only include candidates for those districts.

She even posted a Tik Tok Video explaining what the new bill does.

Virginia Beach has used its current voting system since 1966, three years after it became a city.

In that time, only six minority candidates have been elected to City Council.

“We just had the first African American re-elected,” she said, referring to councilwoman Sabrina Wooten. “That’s great, but we need to keep making sure that the voters are heard and that their votes matter.”

Councilwoman Wooten said it's an honor to be the first, but it's surprising that it took so long.

“For some people and for some communities that’s also troubling," she said. "And it does cause us to look at our election systems.”

Two Virginia Beach residents took the issue to court in 2018.

In their legal complaint, Latasha Holloway and Georgia Allen claim the current at-large system denies Black, Hispanic or Latino, and Asian voters an equal opportunity in the political process.

They cite 2010 Census data that shows minorities constitute over 30 percent of the city’s population - with nearly 20 percent being Black voters.

“The consistent defeat of minority preferred candidates would not occur if the City Council were elected using ten single-member voting districts and one at-large mayoral race,” they wrote in the filing.

The City has argued that it cannot be proven that all three minority groups vote together.

Ruth Greenwood is Co-Director of Voting Rights and Redistricting for the Campaign Legal Center in Washington, D.C.  She’s representing Holloway and Allen in the case against Virginia Beach.

Greenwood said the newly passed legislation doesn’t really affect their case because it has to do with the current system - not the new one that would be created.

But if the city looks to change its system of voting, she hopes they’ll gather diverse input from the community.

“Part of the problem that we saw in the trial was that historically people of color have been left out of decisions and their considerations have been set aside when Virginia Beach council decides to do things,” she said.

Some members of council, including Virginia Beach Mayor Bobby Dyer, voiced concerns that the city’s voters were not consulted on the change.

Dyer sent a last-minute letter to the Senate before the vote saying the city would hold a referendum on the issue in November - something they voted against doing last year.

Del. Convirs-Fowler disagreed with that idea, pointing to past referendums on the same topic.

She cited how In a 1994 referendum, voters did away with the at-large system.

But city leaders said the wording was confusing and decided to hold another referendum in 1996 with new language.

That one reinstated the current system.

“A referendum to let the majority decide for the districts again is counterintuitive,” Convirs-Fowler said. “Voting systems and making sure we protect voter rights is within the purview of the General Assembly and within the constitution.”