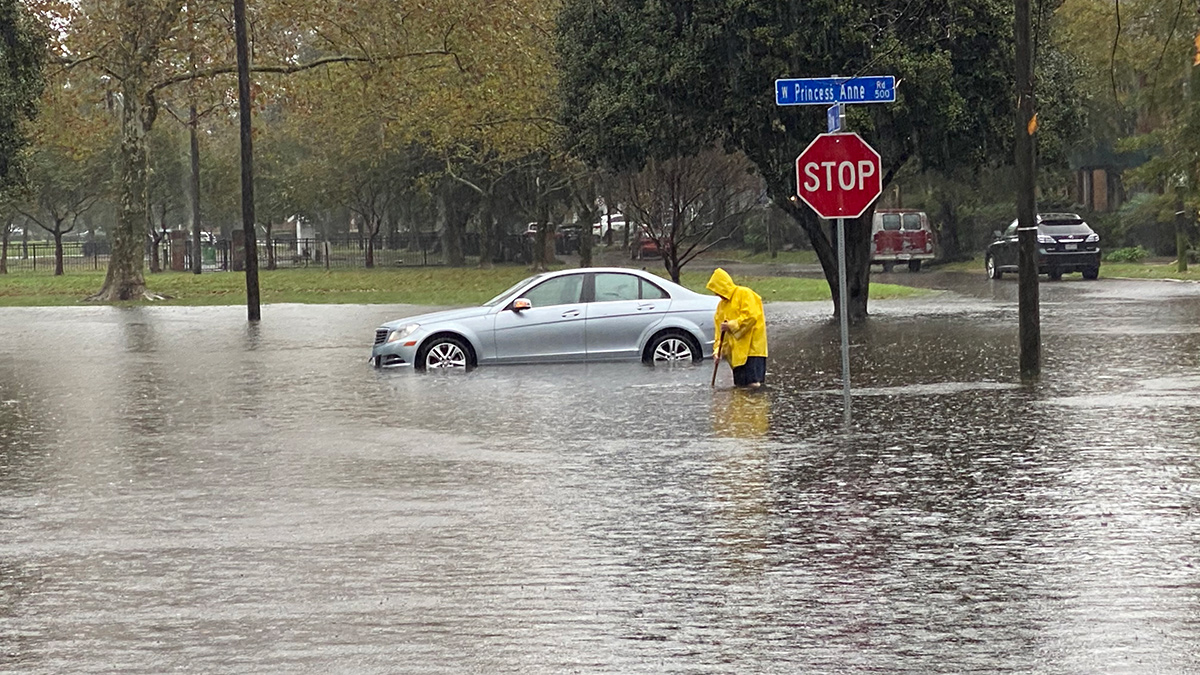 Many Virginians are significantly underpaying for flood insurance. That could soon change as sea levels keep rising and flooding becomes more severe.

According to a new analysis by the climate risk nonprofit, First Street Foundation, more than 100,000 properties in Virginia could see a collective loss of $269 million in flood damage this year. Over the next three decades, those costs could increase by more than 90% in some cities, including Poquoson, Portsmouth and Hampton.

However, flood insurance rates set by the federal government do not accurately reflect flood risk around the state. For example, the average premium for properties statewide in the most flood-prone areas is $1,751, according to First Street. The right price, the non profit estimates, should be $3,922.

Nationally, First Street found that average flood insurance premiums for 4.2 million properties must quadruple right now to keep up with the costs of climate-driven flooding.

“It’s not going to stop there,” said First Street Executive Director Matthew Ebby. “These risks are going to continue to grow as we see sea level rise and precipitation patterns change.”

FEMA will set rates using flood-modeling techniques that closely reflect the risk that properties face — a method similar to what First Street used in it’s analysis. Still, FEMA says First Street’s data are just estimates and warns people not to assume that the new premium increases will match those modeled by the non-profit.

“While entities are free to suggest or estimate their opinion of what flood insurance premiums should be, they are offering exactly that — an opinion — and they do not have insight into the Risk Rating 2.0 initiative,” David Maurstad, the head of the NFIP, said in a statement.

There’s been talk about flood insurance increases for years. The NFIP is a powerful tool that allows the federal government to influence how and where people build. But experts agree that the program has undercharged for flood insurance, making it cheaper to live in flood-vulnerable areas even as climate change fuels more frequent flooding.

Unlike typical private insurance, the NFIP has lacked the legal authority to deny coverage to or dramatically increase rates on properties with excessive claims and repetitive losses. The program has also relied on flood maps that are out of date and do not account for flooding due to heavy rainfall.

As a result, the NFIP currently pays out more in claims than it receives in premiums. The program is now saddled with more than $20 billion in debt.

“[The NFIP] kind of has had to serve two masters. It’s had to keep flood insurance affordable,” said Elizabeth Andrews, director of William & Mary’s Virginia Coastal Policy Center. “If you’re trying to realistically reflect the cost of something, you’re not striving to keep it affordable. That’s been a tough balancing act for the NFIP through the years.”

Flood experts say Virginia offers a clear example of the inconsistency between flood insurance premiums and flood risk. The commonwealth, and 13 other states, account for 82% of the nation’s properties that repeatedly flood.

Based on First Street’s data, annual flood insurance premiums of $652 for a home in Smithfield with substantial flood risk should jump 1,424% over time to $9,934 to cover damages. In Williamsburg, average premiums of $488 would have to increase to $4,439.

Andrews said those hikes would be a “wake up call” for some people. The higher rates could make flood insurance unaffordable for many residents and depress home values, making houses harder to sell.

“It is a very harsh problem for people that can’t afford to just abandon their house,” Andrews said. “And I’m afraid it’s going to happen more and more in our coastal and rural areas.”

Any jump in premiums as part of the new system would be spread out over years because Congress prevents homeowners’ premiums from increasing more than 18% annually. But if a home that’s covered by flood insurance changes owners, the new buyer would have to pay the full rate increase right away.

The new system will account for sea level rise and base flood insurance premiums on properties’ individual flood risk. For the first time, FEMA will also factor in home values in its calculations so that properties with the most potential damages pay the highest rates.

Andrews said FEMA could go further to make the flood insurance program more equitable. One option is to offer direct subsidies to people with lower incomes who otherwise would struggle to pay increasing flood insurance rates.

“But those of you who are wealthier — we’re going to let yours go up and reflect the true cost and let it be an incentive for you to leave,” Andrews said.