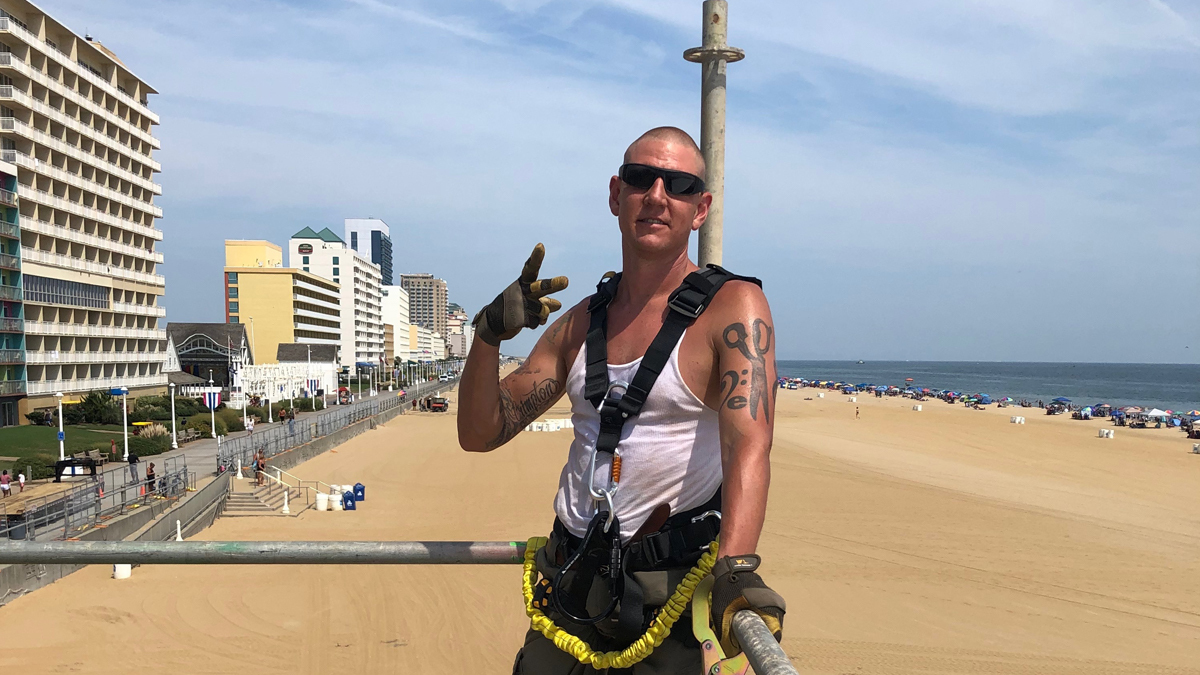 Photo courtesy of Elijah Webb. Before the pandemic started, Elijah Webb was having success working in the stage rigging industry. When that went away, he found a new job as a peer counselor at a local treatment center.

Elijah Webb was working as a fly operator in theater and arena rigging up until March 2020.

He moved to Portsmouth three years ago for his last mission with the Coast Guard.

This new career reminded him of serving on a ship where he worked alongside a team to ensure the safety of an operation.

But like many other gig workers, his opportunities dried up almost immediately as the live performance industries ground to a halt with the start of the COVID-19 pandemic.

“Putting in for unemployment was not my proudest moment,” he said.

Losing his job also put a strain on his recovery from substance abuse.

He battled alcholism for 14 years, and it led to him leaving the Coast Guard.

“I sat around for about three weeks,” he said. “Not having anything to do got pretty dark.”

But then he got a phone call from a treatment center in Hampton Roads asking him to speak to one of their groups.

That led to a full-time job as a peer counselor.

Across the country, nearly 4 million Americans have been out of work for at least 27 weeks.

Victor Chen is an assistant professor of sociology at Virginia Commonwealth University.

He said long-term unemployment creates problems for people who can go back to work.

“There’s unemployment ‘scarring,’” he said. “It’s harder to get a job if you’ve been out of work for a period of time. Employers just don’t look at you the same way.”

Before the pandemic, she had plans to open her own business and capitalize on the established clientele she had in the area.

Instead, she was left wondering what her next move would be.

“I had put so much into this work, but it was a really hard realization after all this time that I couldn’t do anything else with my life,” she said. “I didn’t like feeling non-essential.”

So she enrolled in a Licensed Practical Nursing program through the Virginia Beach City Public School System.

“In a weird way, I kind of look at COVID as an opportunity to kind of push me,” she said. “Nursing has always been something that I thought I might progress towards.”

While Christine and Elijah were able to turn the pandemic into an opportunity, Chen said many Americans won’t rebound so quickly.

“Even once the vaccine really takes off and folks are back to normal, we’re still going to have that lingering unemployment crisis far into the future I believe,” he said.