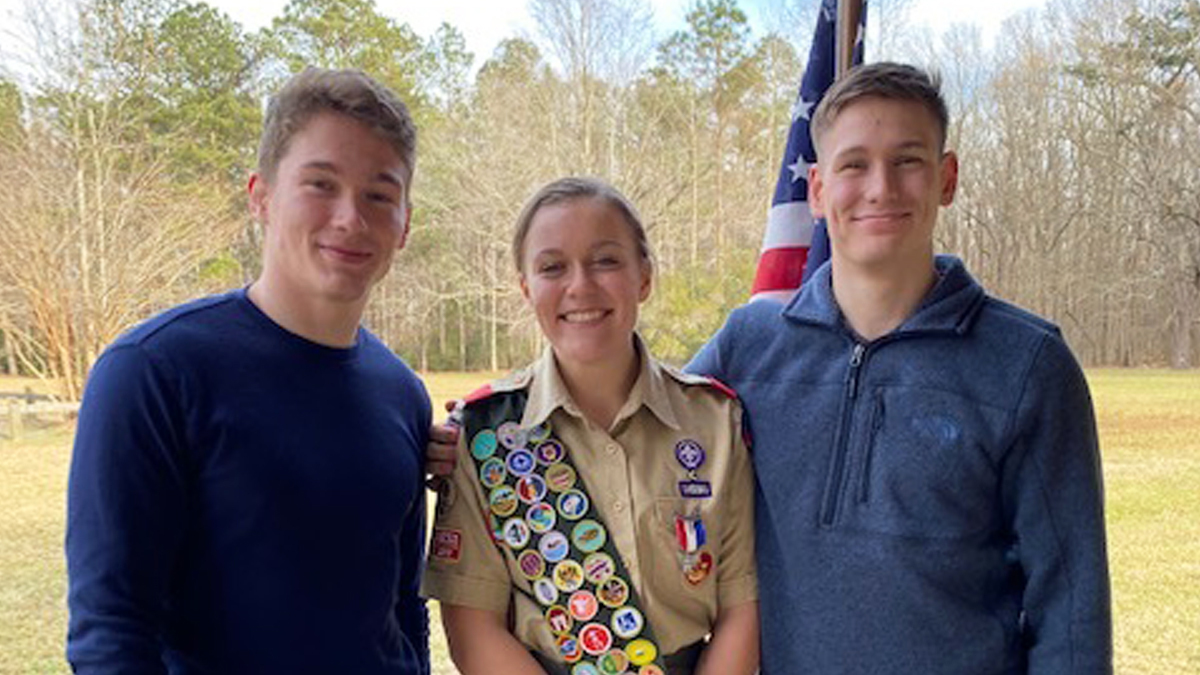 Photo courtesy of Virginia Cameron. Emma Cameron with her twin brothers, Douglas (left) and Ian (right) Cameron. Emma is part of the first class of Female Eagle Scouts in the country.

An Eagle Scout must earn 21 merit badges to receive the highest rank in the Scouts BSA program, which can take up to 12 years.

Emma Cameron, a senior at Hickory High School in Chesapeake, did both.

She will be recognized as part of the Inaugural Class of Female Eagle Scouts on Feb. 8, the same day as the Boy Scouts of America’s 111th birthday.

It makes her part of the first group in the country to earn the rank.

She joined the Girl Scouts when she was in first grade and enjoyed making connections with people she normally wouldn’t have met, like the Tidewater Beekeeper’s Association.

In 2018, she received the Gold Award for leading in the creation of a 700 square foot bee garden and drawing awareness to the bee crisis.

The project was inspired by an old tin her mother brought home from a thrift store. Inside, it explained some of the original Girl Scout badges, and beekeeping was one of them.

“And this was a little bit before the bee craze,” Cameron said. “And I was like, ‘Hm, maybe I should do some research on bees.'”

Emma’s family traces their ancestors back to Isle of Wight County and Jamestown where, according to her family, they were the first settlers to bring a specific species of honey bees to the region.

“It’s just kind of hilarious that my ancestors were the ones that brought them over and I feel like I’m taking care of and advocating for them today,” she said.

In 2019 the Boy Scouts of America announced their Boy Scouts program would change its name to Scouts BSA and start admitting young women.

Emma, whose two older twin brothers Ian and Douglas are Eagle Scouts, jumped at the opportunity.

“They were starting to think about opening up to women, and I was like, ‘Well my brothers are Eagle Scouts, I want to be an Eagle Scout too,’” she said.

“I felt like I could make a difference even though we were confined due to the pandemic,” she said.

It wasn’t purely competitive. She saw how much Ian and Douglas benefited from the program, and wanted to develop her leadership and public speaking skills while making new friends.

Her brother Ian said he’s not surprised that she excelled in the program.

“We have a joke between me and my brother that anything we do, she’s going to do better,” he said. “It’s really funny to see her really put her mind to something and then do it really well, really fast.”

After she graduates, Emma said she is considering attending the Virginia Military Institute where both of her brothers are sophomores.

She sees a direct correlation between her scouting experience and a military career.

“I feel like there are a lot of veteran adults involved in scouting and a lot of them can make connections between the ranks,” she said. “I feel like it’s really meant to set you up for success and your career in the future.”

Virginia Cameron, who is now the mother of three Eagle Scouts, agrees that scouting has had a positive impact on her kids.

“I think at the end of the day they’re better people, they’re better citizens,” she said. “I’m just really proud of their effort and their determination to get that done and the people they’ve met along the way have been awesome.”