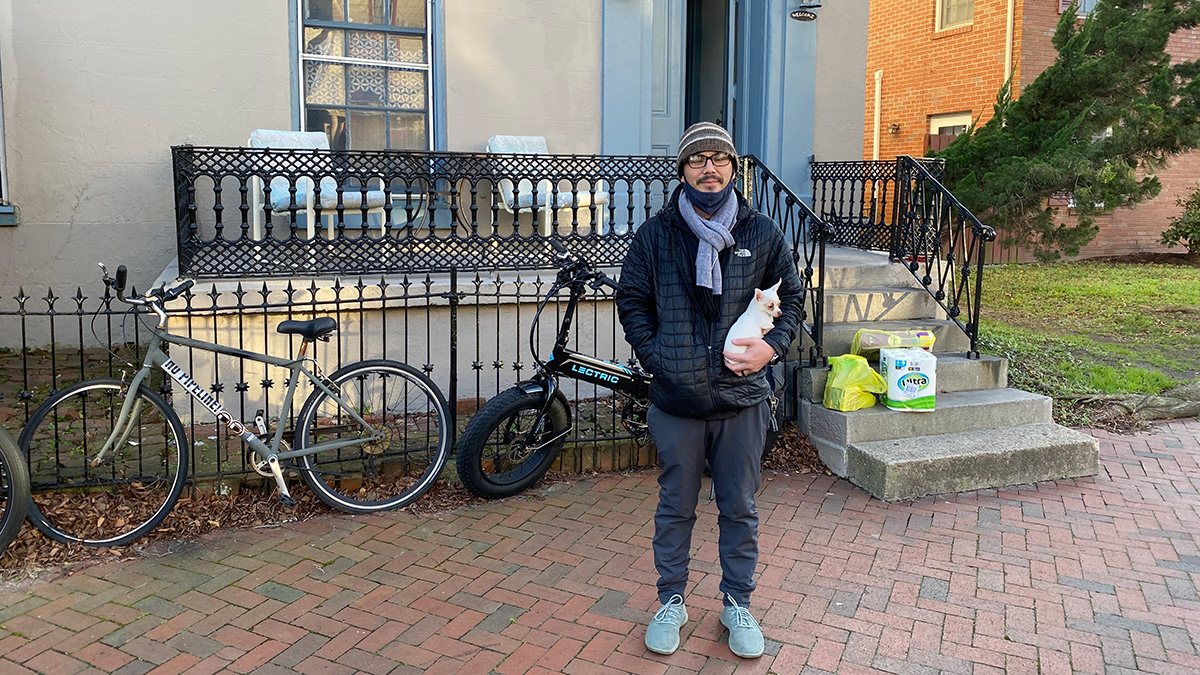 Photo by Sam Turken, WHRO. Joseph David of Portsmouth saved money for a three-month trip to Asia for the 2020 summer. Then the coronavirus struck.

When Everything Crashes Down: Eastern Virginians Look Back On Year Like No Other

Joseph David had huge plans for 2020.

He and his wife spent two years saving more than $10,000 to take their kids on a “magical” summer trip across Asia. They sold most of their belongings, including their cars, and moved from a house in Norfolk into a small apartment in Portsmouth to pay for the trip.

Then the coronavirus struck.

“Not only were we not able to go,” David says, “we depleted all of those resources we saved up…. I bartend. And obviously the bars are closed. I went from working five days a week making pretty good money to working one day and sometimes not even that.”

The year has also been stressful for Kisha Moore, who owns Hummingbird Macarons and Desserts in Norfolk.

Her sales have dropped 40% compared to 2019. She also has a 21-year-old son with sickle-cell anemia.

“He doesn’t have an immune system to be able to fight things normally,” she says, beginning to cry. “If he had gotten sick, he would have died.”

As 2020 comes to an end, WHRO Public Media spoke with Eastern Virginia residents about how they’ve managed a year like no other. COVID-19 has now taken 320,000 lives nationwide, including about 4,700 in Virginia, and it’s changed many more.

Although hospitals are now slowly distributing coronavirus vaccines, uncertainty persists as more infections mount and people try to recover from the pandemic’s impact.

David’s family has a motto: Experiences over possessions.

When they booked their three-month trip to Japan, the Philippines, Indonesia and other countries, they saw it as an opportunity to show the children new places and cultures. David and his wife would earn extra income by teaching English online. And if they found a place they liked, they would potentially move there for a year or two after the trip.

“It’s not something we had to do. But it’s something we wanted to do. We’re very passionate about not only teaching children English,” David says, “but also sharing these experiences with our children.”

Excited about the vacation, his kids began researching and learning basic words in the languages they would come across. And to save money for the trip, the family changed much of its lifestyle.

They sold their three cars and started biking and walking more to get around. They also sold furniture and clothes and left their house in Colonial Place in Norfolk for a small apartment in Portsmouth’s Olde Town.

Now, David says he wouldn’t have gotten rid of so much had he known he’d end up stuck in the U.S.

“We probably would have kept at least one car,” he says. “It sucks… You get so excited when you plan on leaving in June and you’re so close. And then everything comes crashing down.”

‘Emotional in a lot of ways’

For Kisha Moore, 2020 has meant sacrificing time with her son and hoping that he doesn’t contract the virus.

Sickle-cell anemia can be a devastating, painful blood disorder that makes it hard for the body to fight off common viruses like the flu. Moore said at one point, her son didn’t leave his house for three months to avoid any exposure to the coronavirus.

“We were just like you can’t go outside,” she says. “I know that’s tough.”

Moore has also spent a lot of time navigating how to keep her Norfolk dessert shop open.

She says September is usually a boon for her store as children return to school after the summer and parents buy desserts for them. This year, her sales tanked in September and October as many students started the year remotely.

“It’s been emotional in a lot of ways,” Moore says. “October for me personally, it really hit home. I had a week where I just needed to process the fullness of what had happened.”

As the year ends, David and Moore face more uncertainty. Although hospitals are slowly distributing vaccines, health experts say the winter will most likely be the worst time of the pandemic.

Moore still has to be careful about seeing her son. She says she’s quarantining before she sees him for the holidays.

And with his hours as a bartender cut and much of his savings gone, David is looking for ways to earn more income. He says he used to make hundreds of dollars a night at the bar. Now, he sometimes walks home with just $20.

“I’m kind of in a limbo as far as the kind of work that I like to do that makes money because teaching doesn’t pay as much as it should,” he says.

Still, David and Moore are optimistic about the next year. David’s wife and kids have avoided catching the virus. And he says he’ll start saving money again as soon as possible to finally take the trip to Asia.

Moore said her business has benefitted from local grants. The year has shown her the fragility of people and the importance of supporting others.

“When we lean into that and not the other things that tear us apart, it really makes a big difference,” she says. “Life happened in 2020, and some life didn't. We're going to move into 2021 with our heads up.”