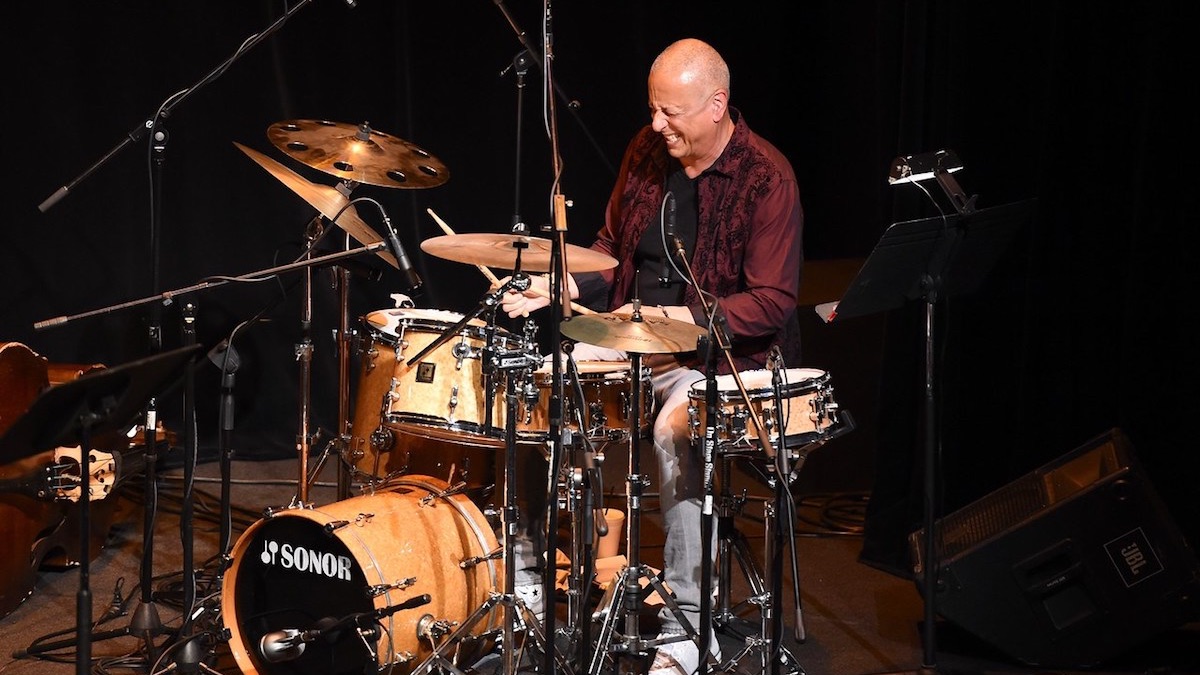 Photo by Tereza Dean. Jae Sinnett released his first recording as a band leader in 1986 and has produced 14 recordings total. He hosts the jazz show "Sinnett In Session" Monday through Thursday evenings from 9pm to 1am and Sunday afternoons from 1pm to 5pm.

'A Better, Smarter Person': Unpacking Jazz With An Expert

"Even in conversation with friends," Jae Sinnett says, "I was selective in what I chose to hear."

This might be a common complaint between friends, but it's exactly the kind of problem Sinnett's music solves.

A recording artist and host of "Sinnett In Session," he has been immersed in the world of jazz for decades. He says this complicated, sometimes difficult music has life lessons to give the people who take time to understand it.

"Jazz taught me there is a difference between hearing something and listening to something," he says. And that distinction has made a difference in his life.

Sinnett grew up with jazz in the background of his home in Pittsburgh. His parents were fans of the music, but in school he played classic rock with his friends. His go-to bands included Black Sabbath and Cream. He eventually explored soul and rhythm and blues, but he wanted a tougher challenge. He started listening to jazz fusion and realized right away that it made demands on him when he began playing it.

"It gave me a unique way of challenging myself," he says. "It presented a different challenge every time I practiced."

He describes how he had to really study the structures of the music, and as he did, he matured. It gave him insight into other styles of music, music he'd always liked but didn't understand as well.

"It made me a better, smarter person," he says.

Sinnett believes some of the great innovators of jazz, like Dizzy Gillespie and Thelonious Monk, intended for jazz to be like this. They took a powerful, energetic dance music and made it "a listening music," something audiences might take in from a theater concert seat. Jazz will challenge your expectations, your conditioning, Sinnett adds. "It's kind of a jolt," he explains, when you first hear its unique structure. But it will reveal itself, if you let it.

"You can't react out of the gate to what you first don't understand," he says. He says you need an open personality and a willingness to learn.

He recommends that people first identify a single instrument in a new song. If you're just discovering jazz, listen to the bass first. Then go back and try to hear the drums. Then put them together in your mind, or listen to the piano. Once you develop this "hearing separation," he explains, you'll be able to understand how the song is put together, and it will be much more enjoyable.

Jazz is known for its improvisation, he adds, but once you can hear the melody really clearly, you'll be able to see how good improvisers are actually building on the melody, developing it, the way a writer might develop a theme in a novel.

He says this process makes you humble and patient, because you can't grasp everything right away.

"I wouldn't put 'A Love Supreme' on a newbie listener," he says, talking about the legendary masterpiece by John Coltrane. "Because it's really, really intense. That's an intense, spiritually powerful record." A new person could much more easily pick up Miles Davis' "Kind Of Blue," which has an easier, gentler beauty. "A knife through warm butter," is how he describes it.

Jazz taught him to be humble as a listener, Sinnett says, but as a player, it taught him work well with others and to stick it out through a challenge. Sinnett served in the military, and he compares it to his experience in that disciplined environment.

"It made me more of a grounded person," he says.

Finally, his experience working with people across the jazz community helped Jae Sinnett embrace people's differences, and try to accept them for who they were.

"Jazz taught me I work better without cliques," he says. "It taught me that if I was going to get somebody to appreciate and open up to me, that I had to learn to respect what they're doing as well."

Sinnett curates jazz every week on WHRV. And on "Another View With Barbara Hamm Lee" he gave a "Jazz 101" talk to help new listeners understand this genre.