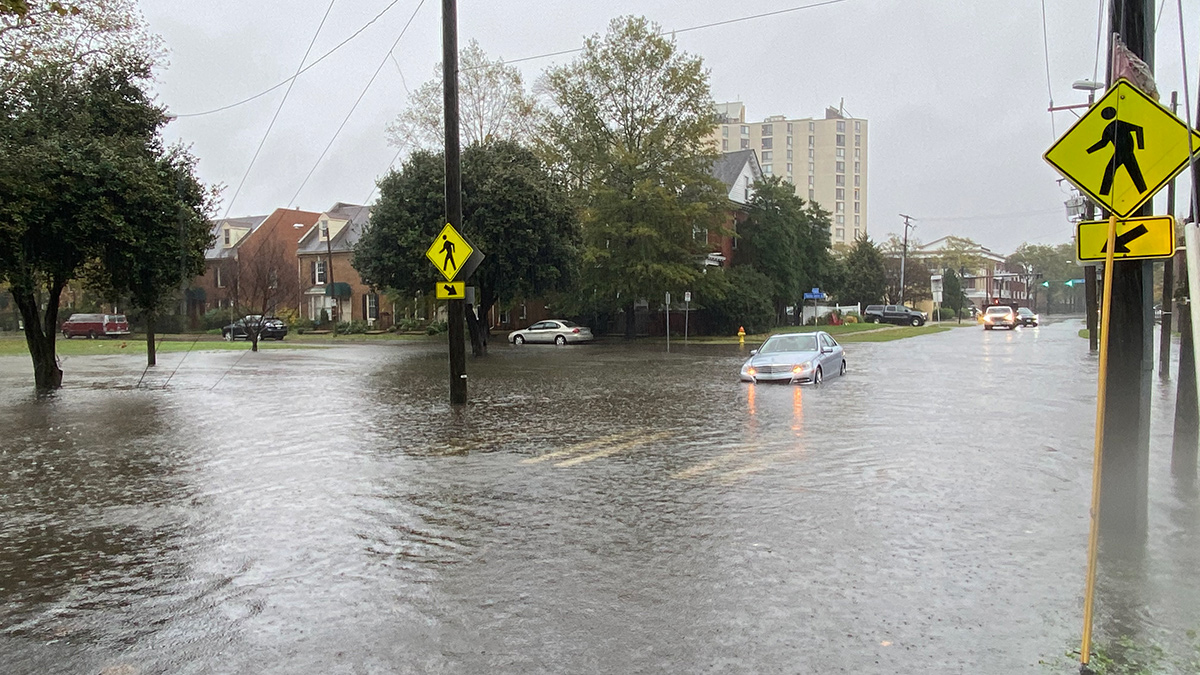 ‘Millions Left On The Table’: Some Hampton Roads Cities Could Do More To Reduce Flood Insurance Rates

William Jennings and his wife have lived in their two-story Virginia Beach home for the last 37 years. Although their house is in the flood-prone Windsor Woods neighborhood, they planned to stay in it through retirement.

“I really like my house,” Jennings said during a recent interview in his front yard. “In 15 minutes, I can be almost anywhere in Hampton Roads…. Down to the beach in 15 minutes.”

But rising flood insurance rates are now making Jennings question his plans. His mortgage requires him to have flood insurance. He currently pays $2,336 annually.

Next summer, his rate will rise 18% as flood insurance premiums increase nationwide. Jennings, a 72-year-old Army veteran, said it could make his house unaffordable.

“Yeah, I don’t want to think about that,” he said. “One of my neighbors said they’ll just walk away from their home and just leave and let the bank take it.”

Jennings said his decision to keep his home or not may depend on whether Virginia Beach commits more to a little-known federal program that provides people with flood insurance discounts.

The program, called the Community Rating System, or CRS, is voluntary and is meant to incentivize communities to reduce their flood risk. Cities secure flood insurance discounts if they undertake floodplain management activities that exceed minimum federal standards. Spreading awareness about flooding and regulating development in flood-prone areas are common ways localities can earn the discount.

The CRS can save residents hundreds of dollars annually. In Eastern Virginia — where sea levels continue to rise and rainstorms have become more intense due to climate change — several localities have been involved in the 30-year-old program for years.

But other cities either still aren’t in the CRS or haven’t taken full advantage of it. And that’s costing residents.

“This is big money,” said Mary-Carson Stiff, who’s with the local environmental non-profit Wetlands Watch and specializes in CRS. “You’re talking millions left on the table.”

According to the Federal Emergency Management Agency, more than 1,500 communities nationwide participate in the CRS. The full discounts apply to people living in Special Flood Hazard Areas — the parts of communities with the most flood risk. Properties in less flood-prone areas can be entitled to limited discounts.

The CRS, which is part of the National Flood Insurance Program, gives cities and towns points depending on the magnitude of their floodplain management efforts. The points determine a community’s class and flood insurance discount. There are nine classes.

“Class one communities earn the highest percentage discount which is 45%. And class nine communities are earning 5%,” Stiff said.

Cities can move up to new classes and obtain greater discounts if they do more to prevent and spread awareness about flooding.

Stiff said common ways of gaining points include putting up signs that say “turn around, don’t drown,” alerting people not to drive through flooded areas. Another option is to require that new houses be built at higher elevations to withstand floods. Infrastructure projects that mitigate flooding can also receive points.

In Virginia, James City County recently improved its CRS rating from a Class 7 to a Class 5. It’s now the only locality in the state to receive at least a 25% discount on flood insurance premiums. The combined savings from the discount will amount to $101,000 per year. People with the most flood risk will save about $284 annually.

Darryl Cook, who worked on the CRS application for James City, said the county received points for restricting development on about 8,600 acres of flood-prone land. One such area is a cypress swamp in Williamsburg where tall, slender trees stretch high in the sky and fallen leaves cover the muddy ground.

“It’s allowed to flood unimpeded, doesn’t damage any structures or anything like that,” Cook said during a recent interview and brief walk through the swamp.

The city of Norfolk is also invested in the program and is in the process of advancing its rating. The city currently receives a 15% flood insurance discount. Officials have hired a new staffer whose only job is to help Norfolk receive at least a 25% discount, which would save flood insurance policyholders at least a combined $2 million per year, according to a city spokeswoman.

“All of our elected officials — all of their constituents have a vested interest in us getting the best score that we can because it’s directly affecting their livelihood,” said Matthew Simons, a floodplain administrator with the city.

While many Eastern Virginia communities have pursued higher discounts in the CRS program, others have not.

The CRS started in 1990. Nearly all coastal Hampton Roads communities joined at least five years ago — except Newport News and Virginia Beach.

Newport News is currently applying for the program. Officials hope to receive a 10 or 15% discount next year.

When asked why it’s taken so long for the city to join, a spokeswoman said Newport News hasn’t had enough staff to complete the application and preparation process. The city doesn’t plan to hire a full-time CRS coordinator like Norfolk has.

Virginia Beach joined the CRS in 2019. The city has a 15% flood insurance discount, which saves residents more than $1.2 million per year citywide.

Whitney McNamara — an environmental planner with the city who works with the CRS — said officials had to buy into the benefits of the program before Virginia Beach could apply.

“Part of it for us was just our constituents and our elected officials really started becoming more aware of the impact flooding was having on our communities,” McNamara said.

The CRS is important in Virginia Beach because the city's Special Flood Hazard Area is one of the most populated in the state with 8,000 residents, according to FEMA. The federal government requires homes and businesses in the high-risk flood zone to have flood insurance if they have federally-backed mortgages.

McNamara and Councilwoman Barbara Henley said Virginia Beach is committed to the CRS. However, there are no immediate plans to improve the city’s rating. McNamara spends about half her time on the program, which makes it difficult to apply for a better rating.

“To get to the point that we could be scrapping for points,” McNamara said, “would take a lot more than the time I have for the program.”

Stiff, the Virginia CRS specialist, said Virginia Beach would benefit from having a full-time staffer who solely works on the CRS. The application process is hard and takes time, she said. The program manual alone is 641 pages.

Roy Wright — a former head of the National Flood Insurance Program — added cities have to be willing to invest resources in the CRS. Experts point to Gloucester and Accomack counties, which have smaller governments than Virginia Beach but have still obtained a 20% discount through the CRS.

“There may be some instances where a community says we’re going to put our time and effort somewhere else,” said Wright, who’s currently the CEO of the Insurance Institute for Business and Home Safety. “But I would say to town leaders, look at the whole set of impacts, so that you can get the value that best meets the needs of your community.”

McNamara said Virginia Beach is balancing its commitment to the CRS with other budget priorities that take time and money. She added the CRS can be selective about the types of flood mitigation efforts it rewards. The city is focused on introducing flood protections, but the CRS program is not guiding officials' decision-making, she said.

“We're trying to be very conscious of not implementing programs for the sake of just getting CRS points,” she said.

Eastern Virginia has experienced about 15 inches of rising sea levels over the past 80 years. The Virginia Institute of Marine Science predicts Hampton Roads could see at least 1.5 inches of higher seas by 2050.

As communities nationwide experience more flood-related disasters, people have been submitting more claims to the National Flood Insurance Program, which is federally-funded and mired in debt. It’s causing flood insurance rates to rise — a lot.

Just ask William Jennings, the Virginia Beach resident who’s unsure whether he can keep his home.

“I’ve got to figure a way out of it,” Jennings said. “You don’t expect this to happen. And it just puts a lot of stress on you and your family to figure out, well, how are we going to be able to pay for all of this.”