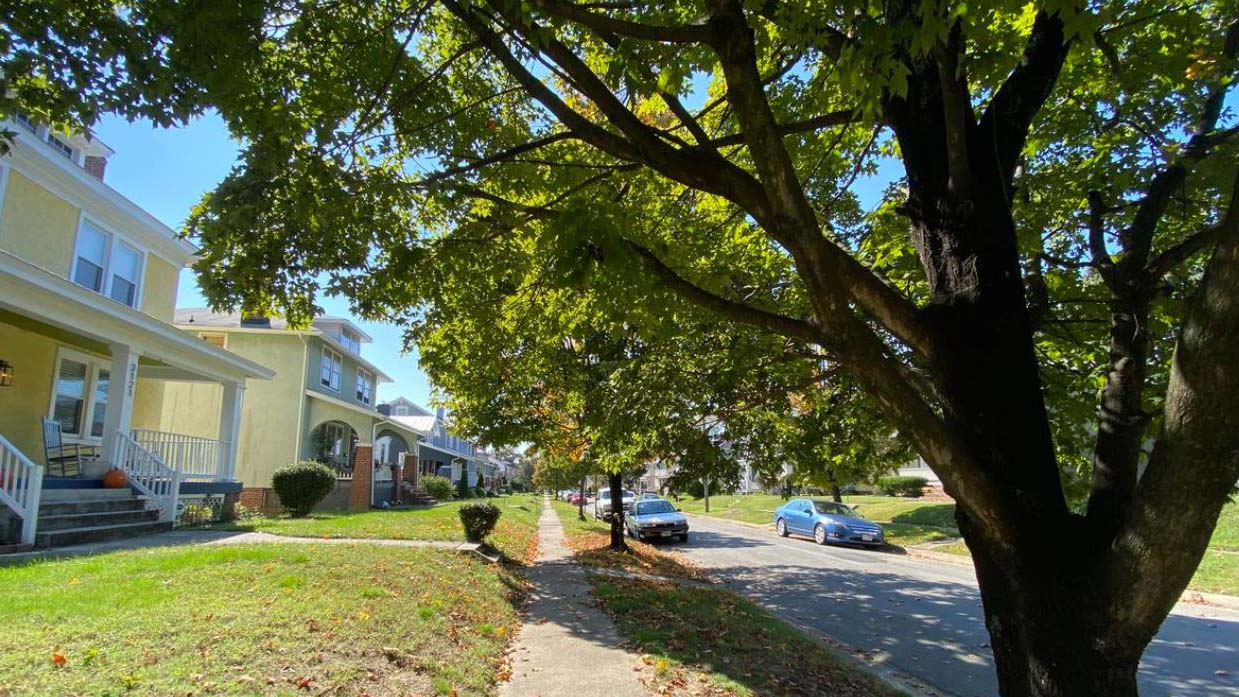 Photo by Mallory Noe-Payne, RadioIQ. Shade from tree canopy and less asphalt are two factors that can reduce a neighborhood's temperature.

Jeremy Hoffman is Chief Scientist at the Science Museum of Virginia, and one of those researchers. To better explain the groups’ findings he heads first to the historically Black neighborhood of Carver, just off Broad Street.

Hoffman points out that the trees here are young and tiny. They were planted just a few years ago as part of a project spearheaded by the local university, VCU.

“The contrast between the high canopy and relatively low canopy areas like Carver is relatively stark,” he comments as he pulls closer to a wide intersection, parking the car and getting out.

Several streets come together here, multiple lanes of asphalt converging in one spot. The low-slung buildings produce zero shade. All those factors add up to a simple constant: higher surface temperature.

According to data measured by Hoffman and his team Richmond's hotter neighborhoods -- like this one -- are on average between 4 and 6 degrees warmer than their cooler counterparts. When a heat wave rolls through that difference can spike to as high as 16 degrees. For residents one of the impacts is higher monthly bills.

“At the scale of a neighborhood 5 to 6 degrees Fahrenheit can have huge implications for energy use,” explains Hoffman, adding that if families are already spending a large chunk of their income on energy, the burden can be even higher.

That’s assuming a resident even has an AC unit to even turn on. If they don’t then the implications can be even more drastic: health. According to the Centers for Disease Control extreme heat is one of the leading causes of weather-related deaths in the U.S.

“Here in Richmond the heat island map actually overlaps really well with maps of where ambulances go for heat-related illnesses,” Hoffman says. “In these places where temperatures are hotter, people are succumbing to heat related illnesses.”

Heat disparities within a single city are just the first piece of this puzzle. The second is that those impacts are disproportionately felt by Black residents. That’s both here in Richmond and in dozens of cities across the U.S. Research now shows that decades old racist housing policies may be directly responsible.

In the 1930’s taxpayer-funded programs subsidized home-ownership, but only in certain neighborhoods. Black Americans were systematically excluded, the neighborhoods where they lived marked off in red ink. Today those same neighborhoods are the ones that feel the heat.

As we cross the James River to another part of the city, Hoffman explains that the practice of redlining didn’t cause the temperature differences researchers recorded today. But it did legalize them, trapping mostly Black Americans in neighborhoods that are hotter.

“Not only did (those residents) not get investment in their neighborhood they could very rarely get the means to escape,” says Hoffman.

Our next stop is the aptly-named Forest Hill neighborhood. Big old trees create a dark canopy of shade, and houses sit just blocks away from the city's largest park system. The researchers measured some of the city’s coolest temperatures here.

The study, published in the journal Climate earlier this year, is the first to link historic housing policy to the growing impacts of climate change. It drew national attention, including a piece in the New York Times. Hoffman hopes their findings change the way people look at cities around them.

“It really was one window into this giant conversation that we haven’t had yet,” Hoffman says. “Our paper was just an easy way into those discussions for people where it might have been harder to talk about health or income. Temperature seems much more passive.”

If policy decisions made decades ago could define the trajectory of a neighborhood today, Hoffman is hopeful the decisions we make now can do the same -- equitably reshaping neighborhoods for the next generation.