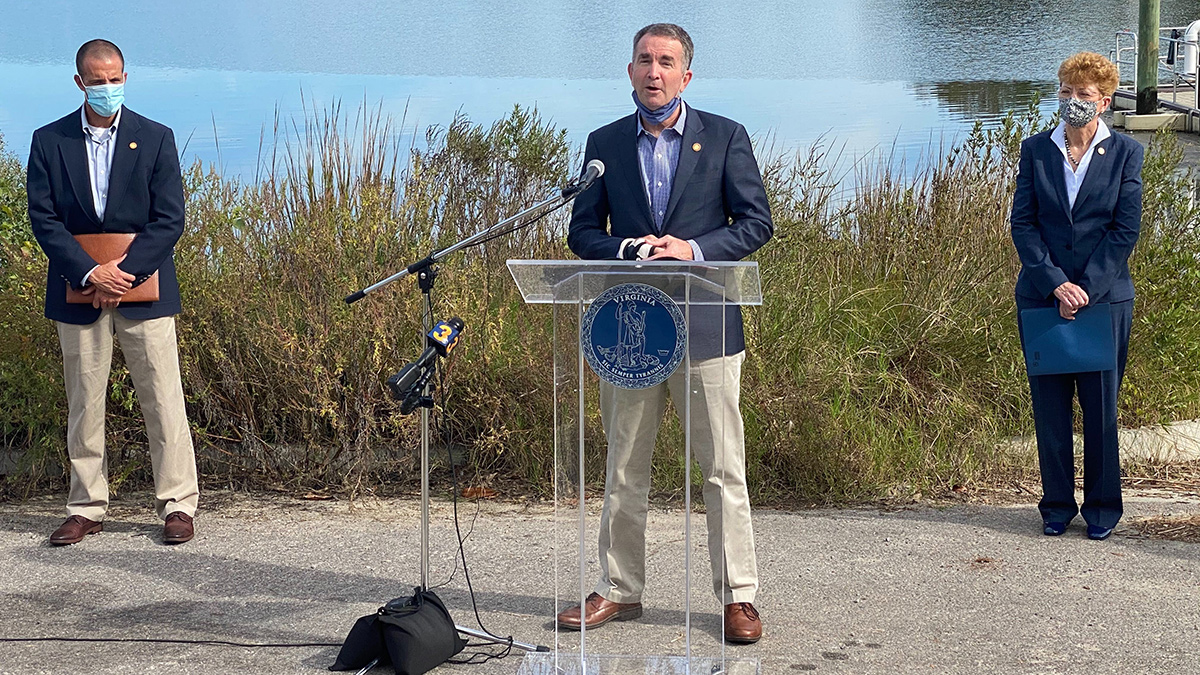 The coastal resilience guide is an initial step in the state’s process of developing a full comprehensive plan to reduce risk from the rising seas. The sweeping 103-page framework will guide state and local officials as they consider projects to mitigate flooding and adapt to other climate change-related events.

During a news briefing Thursday in front of the Lafayette River in Norfolk, Northam said he’ll create a new committee of local leaders, scientists and other stakeholders to develop recommendations for specific coastal adaptation strategies. The administration will also hold a series of roundtable discussions across the state in the coming months to gather input from citizens in coastal areas.

“Climate change isn’t a theory. It’s a reality that affects our communities everyday,” Northam said. “The framework announced today will put Virginia on a course to act and ensure a thriving commonwealth for generations to come.”

The coastal resilience framework comes as Virginia faces some of the highest risk from sea level rise and climate change in the country. The state has already experienced more than 18 inches of rising seas since 1920. Land subsidence caused by tectonic plate shifting and groundwater withdrawals exacerbates the problem.

Over the past five years, Virginia has suffered at least 10 climate or weather disasters per year. Nine such events cost the state more than $1.5 billion in damages from 2018-2019.

Without a meaningful response to the rising seas, more damages are expected to accrue. According to the Virginia Institute of Marine Science, sea levels could rise by at least 1.5 feet by 2050.

The plan has five guiding principles that prioritize green infrastructure and nature-based solutions to sea level rise like living shorelines. Officials say such solutions are just as effective as concrete infrastructure like sea walls and also benefit ecosystems and wildlife.

The plan also ensures that adaptation efforts are equitable across communities of different socioeconomic levels. Racial and ethnic minorities have historically inhabited areas that are more prone to flooding.

“We will work with these communities to plan, implement, and support successful and lasting adaptation and protection strategies,” the framework reads.

Another main aspect of the state’s plan is its focus on “realistic” responses to sea level rise, including relocating residents from areas that will soon be uninhabitable due to constant flooding.

Experts say it doesn’t make sense to invest millions of dollars in elevating homes and raising sea walls in a community that will ultimately be “underwater” in 30 years. Localities, including Norfolk and Virginia Beach, have begun considering buying out some homeowners in flood-prone areas.

Skip Stiles, the director of the local environmental non-profit Wetlands Watch, said the framework is the state’s first official acknowledgement that residents must retreat from some coastal areas.

“Being able to buy three, four, five houses at once, move them out of the way and replace them with a wetland is a significant resilience step,” Stiles said.

Virginia will help fund its resilience efforts by auctioning off carbon credits as part of the Regional Greenhouse Gas Initiative. The REGGI program, which Virginia will formally join in January, is expected to generate $500 million over the next decade.

Ann Phillips, the governor’s special assistant for coastal adaptation and protection, said the REGGI money is a good starting point. But the state will still need additional funding for resilience projects. Phillips said localities and the state will look for more money from nonprofits and the federal government.

“Through leveraging this [REGGI] funding, we’ll be able to use more funding or get more funding,” said Phillips, who also sits on WHRO’s Governing Board of Directors.

Phillips has been tasked with developing the state’s master resilience plan. She said her team started working on the plan before realizing they needed to collect more data and information from localities about their flood risk.

She said the new framework will help with the data-gathering process and also jumpstart more resilience projects. The state’s master plan is expected to be complete by the end of 2021.

“There’ve been many times I’ve said to my family and colleagues, ‘You know I’m going to go to my grave before Virginia steps up on this,’” Stiles said. “Virginia has really stepped up on this.”