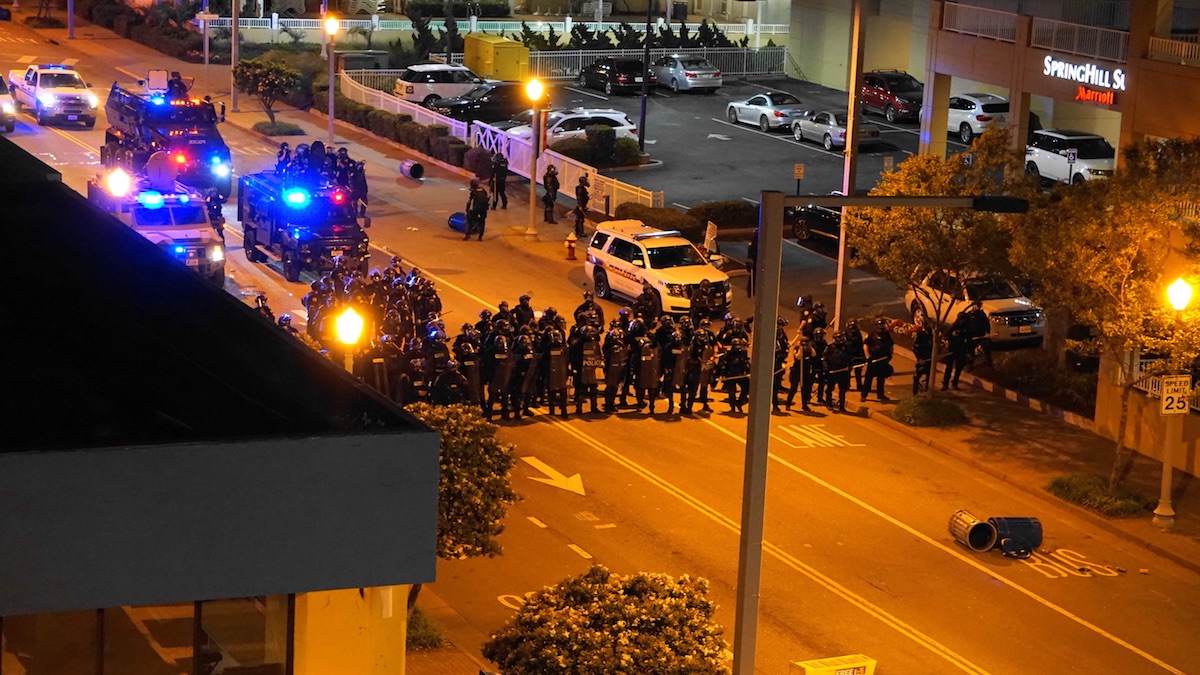 Photo By Jackson Robles. Three police vehicles, including an MRAP at the top left, support a line of police. Robles took this photo from a nearby parking garage during the May 31 BlackLivesMatter 757 demonstration at the Virginia Beach Oceanfront.

Five Hampton Roads Police Departments Have Military Vehicles. Here's How They Used Them.

The federal government delivered a Mine Resistant Ambush Protected (MRAP) vehicle to the Virginia Beach Police Department in 2014. MRAPs are armored military vehicles, anywhere from seven to more than 22 tons, designed to withstand blasts from mines and improvised explosive devices in a war zone.

Virginia Beach Chief James Cervera requested the MRAP, writing in an application that it was needed for possible domestic disputes, mental illness crises, hostage situations and SWAT calls. High on his list of possible emergencies were active shooter situations.

But when a gunman opened fire on city employees on May 31, 2019 at the Virginia Beach Municipal Center, police did not use the hulking six-wheeled vehicle.

“That happened so fast we did not have time to deploy it,” VBPD spokesperson Linda Kuehn wrote in an email to WHRO.

The department did use the MRAP a year after the shooting, at a Black Lives Matter protest at the Oceanfront.

Through a Freedom of Information Act request, WHRO obtained the applications of each of those departments and compared them to how departments actually used their MRAPs.

The way the departments said they would use their vehicles wasn’t how they actually used them -- when they used them at all.

The discrepancy between how the police justify MRAPs, and how they use them, shows the unplanned and piecemeal nature of police militarization, a broad national trend coming under increased scrutiny as law enforcement agencies crack down on protests that started after the killing of George Floyd.

A new bill restricting the use of military equipment, including MRAPs, recently passed the Virginia General Assembly and was signed by Gov. Ralph Northam Wednesday. Departments must now apply for a waiver with state authorities to use them for search and rescue missions.

In Virginia Beach, Cervera indicated in his request that each of the 180,000 calls the department responded to in the previous year could be the kind of emergency requiring an MRAP, and that SWAT officers had conducted 45 “high-risk operations” during that same period. It’s unclear if the vehicle was ever used for such an operation.

“We do not have a registry for each time that is used,” Kuehn wrote. “It is not often.”

The York-Poquoson Sheriff’s Department told the federal government there was a possibility that several area military bases and tourist attractions could be attacked by terrorists.

York-Poquoson has used its MRAP, but not to protect the area from terrorists. Instead, it’s deployed against a more prosaic threat: the weather.

“It has never been deployed for any reason other than during storms to assist in tree removal and for access to flooded areas,” said Sheriff J. D. "Danny" Diggs. Officials put it in place during every major weather event, he added.

The Virginia Beach Sheriff’s Office request justified its MRAP by saying it would help respond to active shooter events and hostage situations. It has never deployed the vehicle.

The Southampton Sheriff’s Office listed nearby correctional facilities as sources of danger and also suggested the MRAP might be needed to protect “critical military bases ... including a NATO base” in the region. The NATO installation is 56 miles away in Norfolk.

The department only deployed its vehicle once during training in 2019.

The Franklin Police Department said there was an “overwhelming” need for its MRAP when serving high risk warrants, along with other dangerous law enforcement jobs.

Deputy Chief Robert Porti said the department used its MRAP once in 2018 to serve a drug-related search warrant with several other law enforcement agencies. Franklin’s MRAP was the closest and easiest to get to the scene.  It’s also been used occasionally to rescue stranded motorists during flooding.

Where Did MRAPs Come From?

The Pentagon bought MRAPs in response to improvised explosive attacks against U.S. forces overseas. By 2012, the U.S. government had almost 28,000 of the armored vehicles with their characteristic V-shaped hulls.

Nationwide, more than 8,000 agencies participate in the 1033 program.

The York-Poquoson Sheriff’s Office says its MRAP is necessary, given the weather emergencies the area has faced. Officials from the office showed the vehicle to WHRO and demonstrated how it's used.

“We have a lot of areas that are flood zones, which are low-lying. And after major hurricanes come through, there are times we need to get down into those areas to (evacuate) people,” said Capt. Kyle Hahn.

He pointed out a large spool of cable, the winch on the front, which can remove downed trees. It also has an elevated exhaust, and operators can shut off the radiator fan for 15 minutes. Lt. Aaron Rosen said these features allow the MRAP to wade through floodwater.

Originally, the MRAP the office acquired had seats with a shock-absorbing system so the full blast of an IED would not kill the occupants. Officials refitted the troop compartment with seats from an old school bus. Officials also sealed the gun turret on the top. Bullet holes are still visible on the body of the sand-colored vehicle.

“Everyone looks at it and calls it a tank; it’s not a tank,” Rosen said. “There’s no weapons on it. There’s no holes to put any guns through or anything like that.”

“It’s just a transport vehicle, that’s all it is. With armor plating.”

York-Poquoson deputies said an MRAP’s resilience could protect officers from falling trees and other hazards that might destroy a police car during a storm.

Police nationwide don’t usually use MRAPs to deal with bad weather, according to Mike Deckard, assistant professor of sociology and criminal justice at Old Dominion University.

“Speaking broadly across the country, we see these vehicles and other equipment being used mostly to enforce non-violent drug warrants,” he said.

Of the five local departments with MRAPs, only one -- the Franklin Police Department -- said they’d used theirs for a search warrant in a drug case. Franklin PD Deputy Chief Porti said it was a “high-risk" warrant but did not provide details about what made it potentially dangerous.

Recently, police have used armored vehicles in protests. NBC News tracked protests that occurred nationwide after the May 25 killing of George Floyd and found 29 occasions where police used military-style vehicles to confront protesters. At least 17 of the vehicles were MRAPs obtained under the 1033 program.

"How Does That Not Antagonize People?"

During the May 31 Black Lives Matter protests at the Virginia Beach Oceanfront, police mounted a speaker on their MRAP to communicate with the protestors, according to VBPD spokesperson Linda Kuehn. They used the vehicle to carry equipment and as a mobile medical center.

Aubrey “JaPharii” Jones, president of the local Black Lives Matter organization, said police used the MRAP to tell the crowd the protest was an unlawful assembly. They rolled it out, and then the tear gas came, he said.

“It was a big-ass black tank thing,” Jones wrote in a text, “and they were firing tear gas at us. It was hard to see. Felt like we were in ‘The Hunger Games’.”

Kuehn said police did deploy gas, “well after” they declared the protest illegal.

Deckard said that when police use military equipment during protests, it often increases the tension.

“A protest will be perfectly peaceful, until police show up in military gear who look indistinguishable from an occupying force,” he said. “They’re oftentimes wearing battle uniforms if not clad entirely in black, kind of out of some dystopian, sci-fi thriller.”

“They show up like they’re going to war. They bring the war with them.”

According to Augusta Renee, another leader in the local Black Lives Matter group, that’s what happened during the Oceanfront protest.

She was about to leave the protest after 9 p.m., when she saw police suiting up in riot gear with shields, masks and knee pads. The police formed lines blocking off certain streets. The VBPD put its MRAP and other armored vehicles behind a line of officers to create a barrier.

“They were like military-grade tanks,” she said. “They were huge, and they were right behind the officers.” The event turned chaotic and violent. According to a Virginian-Pilot report, two police officers sustained injuries, authorities arrested more than a dozen people and vandals smashed windows and set trash cans on fire. The VBPD and the protestors argue over who is to blame.

“As things started to die down, police showed up with riot gear,” Renee said. “How does that not antagonize people?”

According to Wayne McElrath with the Project on Government Oversight, MRAPs in war often create barriers between soldiers and civilians the same way Jones and Renee said they did in Virginia Beach.

“The profile and the stance of the vehicle isn’t well suited for assisting the military and being accepted by the countries or the territories that they are looking to patrol,” said McEalrath. He’s studied why the Pentagon took MRAPs out of service.

A 2011 U.S. Army bulletin said the MRAP should be used with discretion, as it could lead to American forces developing a “garrison mentality” overseas.

Del. Dan Helmer represents Fairfax County in the General Assembly, and he is the chief patron of the bill restricting military equipment. He’s an Army veteran who served 11 years on active duty and said a counterinsurgency is not the same as community policing.

“Allies don’t usually come into a community in tanks,” he said.

"They are large, and in fact if you Google 'MRAP' and 'drowning',” he said, “you will see that a number of soldiers and Marines have died as a result of them turning over in water. They have very heavy doors.”

Police have been increasingly using military tactics and military equipment for sixty years, according to Deckard.

SWAT teams, outfitted with more weaponry and protective equipment began in the 1960s and spread across the country. Deckard said the drug war, increase in school shootings and 9/11 made decision-makers in both parties and at every level of government push for more aggressive police forces.

“Essentially every single administration, every politician in America until 2014 was pretty much onboard with continually escalating and exponential growth of military tactics and military structure in American policing,” Deckard said.

“We as a society should be using everything that we can to ensure that citizens feel free enough to protest. It’s one of our First Amendment rights. So why are we rolling out this ultra intimidating equipment, not to protect the protestors, but to further intimidate them?” he said.

The Chesapeake Police Department has gotten approval for an MRAP, but has not received it yet. It’s unclear how Helmer's legislation restricting MRAPs could change that.

Sheriff Diggs from the York-Poquoson office said he’s not sure whether this will stop his office from using the MRAP during flooding.

“I hope that lives are not lost because of a knee-jerk reaction to a political agenda that does not serve the public’s safety,” he said.