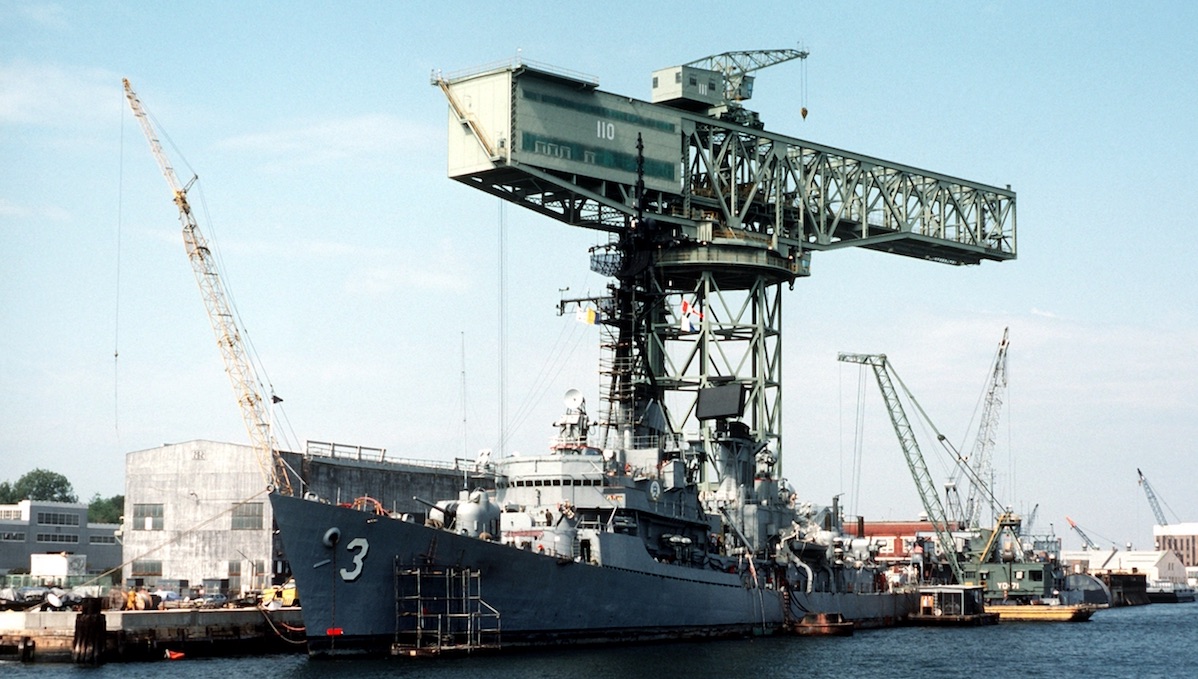 Photo by Don S. Montgomery, USN (Ret.). The Navy wants to build a power plant at its shipyard in Portsmouth.

Environmentalists are raising concerns about a plan to build a new natural gas-fired power plant at Norfolk Naval Shipyard, saying the project could increase air and water pollution.

The Navy seeks a permit from the Virginia Department of Environmental Quality to construct and operate the combined heat and power plant at the shipyard in Portsmouth. Navy officials say the plant will provide the facility with its own source of steam and electricity and lower overall energy use.

DEQ is deciding whether to issue or deny the permit. It recently held a public comment period for the request from August 18 to October 7. The Navy submitted an application for the permit last year.

The Chesapeake Bay Foundation and environmental activists say the plant makes little sense as Virginia tries to transition to cleaner, renewable energy sources in response to climate change. Air pollution from the plant could also jeopardize the health of people who live near the shipyard, activists say.

“It’s important that people understand that this is a potentially substantial threat,” said Peggy Sanner, the Virginia executive director for CBF. “It needs to be examined in a thorough and very transparent public way involving the community.”

The power plant project includes constructing a two-story, 30,000 square foot building in what is currently a parking lot at the shipyard. The building will house the plant’s energy turbines and steam generators.

The Navy’s main argument for the plant is it will increase the shipyard’s energy efficiency.

During the normal electricity transmission process, energy is lost as it’s generated from a power plant and then travels long distances over power lines. To make up for the lost energy, plants burn extra fuel and produce additional electricity — making the power generation process more costly.

The Navy says the new power plant will cut the shipyard’s dependence on electricity that’s transmitted over long distances and therefore minimize lost energy. In the event of an extended outage to the electrical grid, the plant will also let the shipyard keep operating and limit delays to ship repairs.

According to reports about the proposal, the plant will include several mechanisms and practices meant to limit pollution. It will also reduce emissions by cutting the Navy’s demand for energy from the grid.

Still, the power plant is expected to emit at least 75,000 tons of carbon dioxide per year. That’s the equivalent of more than 16,000 cars on the road in one year.

Sanner fears the plant will also emit nitrogen oxides, which could eventually flow into nearby water bodies, including the Chesapeake Bay. Nitrogen is a major pollutant in the bay, and Virginia is currently trying to reduce nitrogen flows into the estuary.

“These nitrogen oxide emissions from the air will to a great extent land on the land where they will be washed into the water. Some will land directly on the waterway, contributing to nitrogen degradation in the bay,” Sanner said.

She added the plant may also have health consequences for residents of a nearby predominantly Black community. The plan could emit small-sized particulates that could lead to cardiovascular and respiratory problems.

In response to the concerns from environmentalists, a spokeswoman for the shipyard affirmed the plant would not increase pollution. The Navy has said the project will also create new jobs and provide other local economic benefits.

Michael Dowd, the director of DEQ’s air and renewable energy division, said the agency received nearly 100 public comments about the power plant proposal. Staff will now evaluate the comments. The permit application could next go before the Virginia Air Pollution Control Board for review before DEQ decides to grant or deny it.

Sanner said state officials must consider all of the potential consequences of issuing the permit.

“It’s not just a question of, ‘Do we use less energy here than from the grid?” Sanner said. “You choose an energy source — that selection process needs to be made taking into account all of the related effects of that particular energy source.”