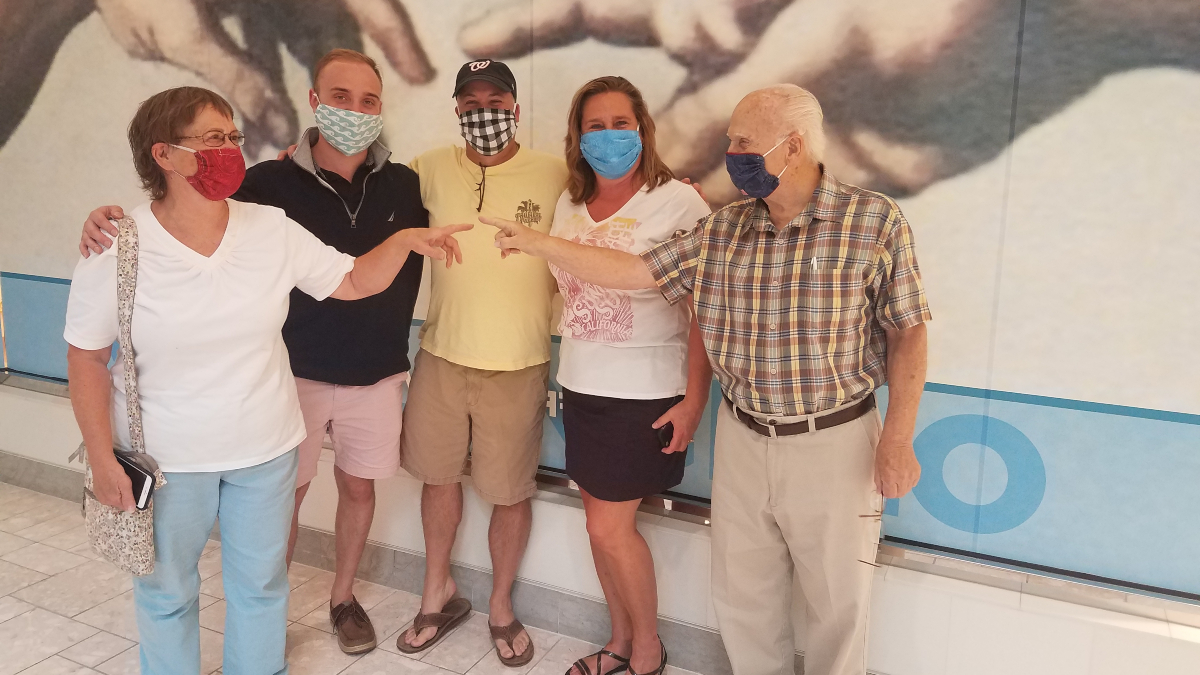 Photo by Gina Gambony/WHRO. Alex Dean (second from left) has been to the Sistine Chapel, but his family has not. They stand at the entry waiting for their turn to see this internationally touring exhibit.

Michelangelo At MacArthur Center Through Sunday

Most events scheduled by the Virginia Arts Festival have been canceled or postponed. But one unique exhibit remains on the schedule.

"Michelangelo: A Different View" is the first exhibit of its kind licensed by the Vatican, according to Alli Pereira, director of public relations for the Virginia Arts Festival.

"What you're going to see when you come into the exhibit are about 48 different panels, and you feel like you're in the Sistine Chapel," Pereira said.

But at the Sistine Chapel, Michelangelo's paintings are 70 feet above your head. In this exhibit, you view the work up close. The scenes were photographed with a "relatively new technology," Pereira said, and printed true to original size on a thin film. The images don’t look like photographs; you can see the brush strokes and cracks in the plaster. You can see the musculature in the figures that reflect Michelangelo’s background as a sculptor.

Of course, this exhibit is not in the Sistine Chapel; it's in the closed Forever 21 space in the MacArthur Center. Aside from viewing the amazing artwork, there's music in the background that helps set the scene.

Pereira has seen the work at the Sistine Chapel, but she finds this exhibit more intimate. At the Chapel, she said, "you're sort of corralled in like cattle, you know, you're shoulder to shoulder with tons of people."

Another visitor, Alex Dean, said when he visited the Chapel in person, it was overwhelming. His parents and grandparents had not been to Italy, so he encouraged them to come see this exhibit.

According to Dean, when you go in person "you're craning your neck and taking it in all at once." Dean said it was easier to follow the story Michelangelo painted at this exhibit. He was particularly struck by the images of Noah and "The Last Judgment."

The most famous segment is probably the "Creation of Adam," with the hands of God and Adam reaching out toward one another. But there are many more fascinating scenes—like the "Creation of Eve" and "The Fall and Expulsion from Paradise."

Michelangelo: A Different View is on display at the MacArthur Center through Sunday.